Home » Blog » Hopak | Strange dances from around the world 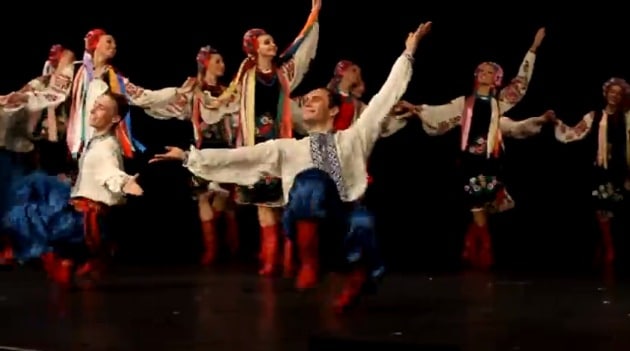 Popularly known as cossack dancing, or “that sitting down, kicking legs dance”, hopak is the national dance of Ukraine. The name comes from the Ukrainian word for jump, as well as the exclamation “hop”, which is an expression of surprise or amazement – somehow it makes the dance seem even more fun to imagine that the dancers are all surprised by their movements.
https://www.youtube.com/watch?v=Q-Y7oKPdV70
Hopak was originally performed by soldiers rather than by professional dancers, and this may be why the dance doesn’t always stick to specific rhythms. The first performances took place after battles and included re-enactments of the fights that had been won. Often these re-enactments would include acrobatic jumps and other moves designed to showcase the dancing soldier’s strength and heroism. Of course, just like today, these young men’s memories of their role in the fight were always 100% accurate.
https://www.youtube.com/watch?v=kQlJ6hWhqdY
The soviet dictator Stalin once forced Khrushchev to perform a hopak to entertain other Communist Party members. It’s good to know Stalin had a sense of humour, even if he did murder millions of people – Khrushchev had been the Communist Party chief in Ukraine, but was an overweight man in his mid-50s by the time he was ordered to perform the energetic dance. Perhaps the famous Blair/Brown tension at the top of British government was the result of a similar incident, with Blair forcing Gordon Brown to dance a Scottish jig round an Islington restaurant? We can only speculate.