During the Cold War, East and West competed in almost every arena – space exploration, building nuclear weapons, doping their athletes (weirdly not in travel insurance, the true unifier of mankind) – however nowhere was this rivalry fiercer than in the world of kitsch international singing contests. 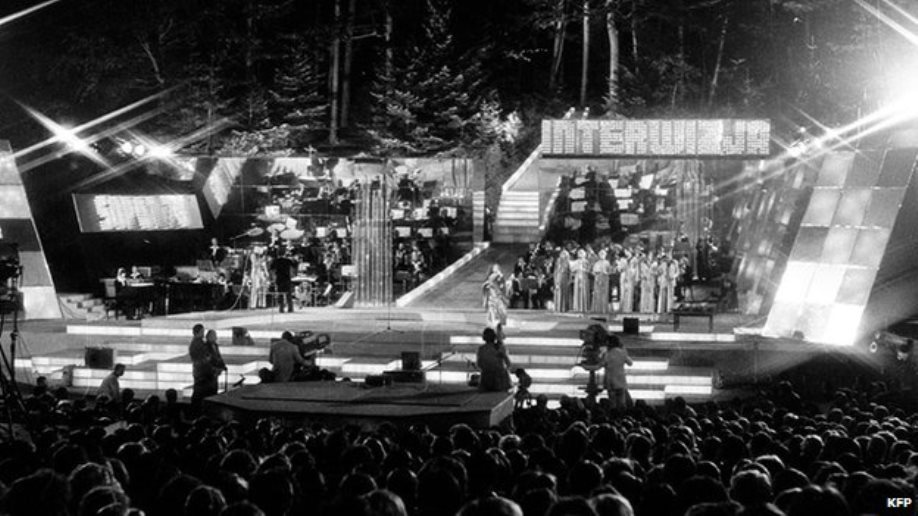 The Eurovision Song Contest began in 1956 and, by the mid-seventies, it was such a success that the Eastern Bloc could no longer ignore it (and they had probably been trying). Perhaps they saw the unifying power of the contest and wanted to bring something similar to their citizens, or perhaps they saw the Brotherhood of Man’s 1976 winner “Save Your Kisses for Me” and thought they couldn’t possibly do worse. Whatever the reason, between 1977 and 1980, Poland’s Sopot International Song Festival was rebranded “Intervision” as a direct rival to Europe’s competition.

As you might expect for a song contest held in the late seventies, Intervision didn’t allow its viewers to vote by text message. Instead, those watching at home had to turn their lights on when they liked a song and off when they didn’t, with data from the electricity network then being used to allocate points. The strange thing about this (well, one of the strange things) is that it’s a far more democratic system than the one used by Eurovision which, until 1997, relied solely on panels of music professionals for its judging. The light switch voting method isn’t perfect, of course; the results can only be estimated – and it does have the downside that, if you don’t like one of the songs, you have to listen to it in the dark.

In recent years, the number of countries entering Eurovision has greatly increased. However, even in the late seventies/early eighties, the contest used only a very vague definition of “Europe” and was happy to allow Israel and Morocco to compete. The Intervision Song Contest took an equally relaxed approach to its entry criteria and (perhaps hoping the contest would become a communist propaganda tool) invited Cuba to join in. Oddly Finland, who were regular Eurovision competitors, were also allowed to take part – meaning that, for four years at least, the lucky Finns were treated to two of these glitzy annual contests.

The first winner of Intervision was the Czechoslovakian song “Malovaný džbánku”, which directly translates as “Painted Jug”. For a laugh, I watched a performance of the song on YouTube but, somewhat disappointingly, it wasn’t too bad. If nothing else, it was certainly a lot jollier than that year’s Eurovision winner, “L’oiseau et l’enfant“, which I also sat through – that was well boring.

As 21st century westerners, it’s hard for us to judge “Malovaný džbánku” – we can’t fully understand the context of the song and we haven’t got a Soviet version of Graham Norton to tell us if it’s any good or not. I haven’t listened to any of the other songs from 1977’s Intervision, but enough comrades must’ve left their lights on to give “Malovaný džbánku” the most votes. Although you would hope that, in a truly communist song contest, a large proportion of these votes would’ve been redistributed to the other songs, each according to their need.