Unusual voting systems from around the world

Just in case you didn’t already know (I mean, it’s not as if anyone’s mentioned it at all…), millions of Americans will today be voting for the guy they want to be their president for the next four years – the guy who’s already been doing it for the last four years, or the guy who hasn’t. So, not being immune to all this election fever, we decided to investigate unusual voting systems from around the world.

Playa de Gulpiyuri: The beach in the middle of a meadow

If you’re strolling through a grassy meadow, surely one of the last last things you expect to see is a big sandy beach, right? Well, not if the beach you stumble across is Playa de Gulpiyuri in Spain!

5 truly bizarre festivals from around the world

When you think of festivals, what comes to mind? What comes to my mind is mud, drunks and unfortunate smells. But it doesn’t have to be like that! Throughout the world, there are some really strange (non-musical) festivals and celebrations… Spain, I’m looking at you! I could have written a whole, separate post about their festivals, but then I wouldn’t have got to share these with you!

The world’s oddest statues and sculptures

The Statue of Liberty, Christ the Redeemer, Michelangelo’s David – they’ve got nothing on these! After extensive research (a bit of Googling), I’ve found what I regard to be some of the world’s oddest statues and sculptures… You’ll be surprised by how many obscene statues there are out there, too. But I’m afraid you’ll have to look them up in your own time…

6 feel-good food recipes from around the world

Food is a wondrous thing. Aside from the whole ‘keeping you alive’ aspect, food can also have a big impact on your mood and, whether you’ve just been dumped or are nursing the hangover from hell, there’s no substitute for a bit of comfort food.

Buying fruit and veg at your local market is very rarely a life or death situation. Unless you live in Thailand, of course… Maeklong Market in Samut Songkhram spends most of its time as your everyday Thai market, but also happens to be a railway line at the same time!

Ronda: The city that’s divided in two by a canyon 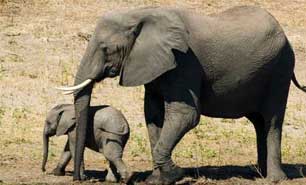 This big lad is an African elephant and he fancied a drink. From a swimming pool. That had people in it. He clearly didn’t mind that there were a couple of humans in his beverage… I can’t say I’d feel the same!