Father Christmas is a global figure; one of the world’s most recognisable celebrities. He may go by various different names – Santa Claus, Papa Noël, Ông Già Nô-en – but his appearance and present delivery methods are always the same. (And why wouldn’t they be? He’s a real person.)
In some countries, however, they’re not quite sure about jolly old Santa. Either they’ve ignored him completely, or they’ve come up with their own twisted version, incorporating ancient traditions and inappropriate sidekicks. Fortunately for children in these countries, the presents still get delivered (even if not always on the right day).
It probably goes without saying that our Father Christmas is the one true Father Christmas but, nevertheless, let’s take a look at who else might be filling the stockings around Europe: 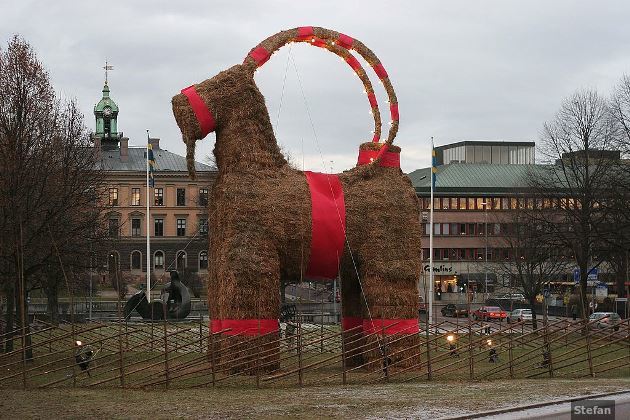 In Finland, the presents are distributed by Joulupukki, the Christmas goat. Sadly, this sounds more exciting than it actually is – although in some parts of the country someone will dress up as a goat, the character is more often depicted as a bearded man in a familiar-looking red suit. 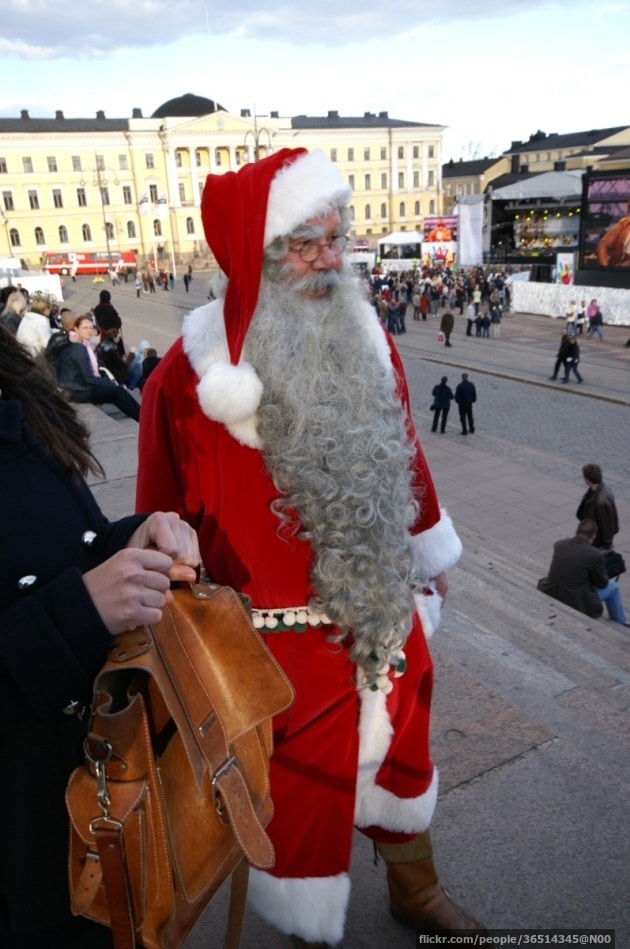 While he may look a lot like Santa, Joulupukki takes a much more sensible approach to his present-giving. Instead of waiting until the middle of the night, Joulupukki arrives with his gifts during the Christmas Eve celebrations, and simply knocks on the door rather than climbing down the chimney (which, let’s face it, is a bit of a health and safety no-no). 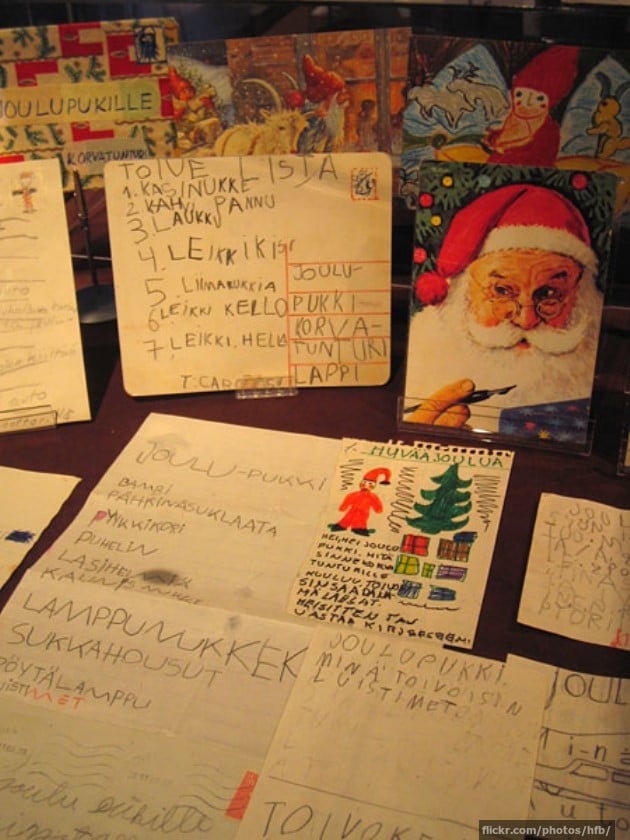 Joulupukki and his (non-flying) reindeer may be slightly less magical than the character we’re familiar with, but what he lacks in mystery he more than makes up for in practicality. 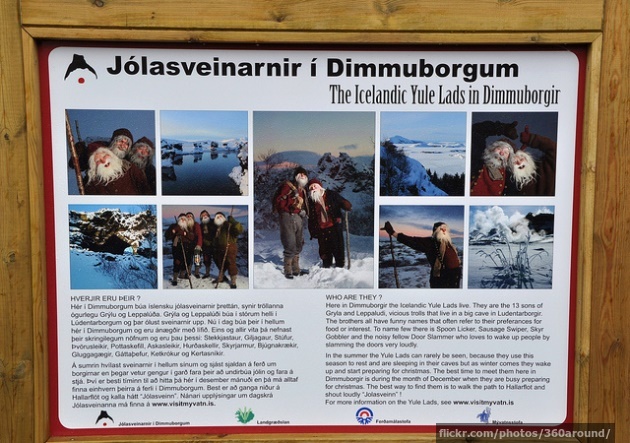 Wahey the Yule Lads!
The exact number of Yule Lads has changed through the ages, but there were thirteen at the last count, with each one having his own distinct personality. These range from the odd (Stekkjarstaur, the lad who harasses sheep), to the nasty (Gluggagægir, the lad who peeps through windows), to the slightly sad (Stúfur, the short lad who steals dirty pans so he can have something to eat). 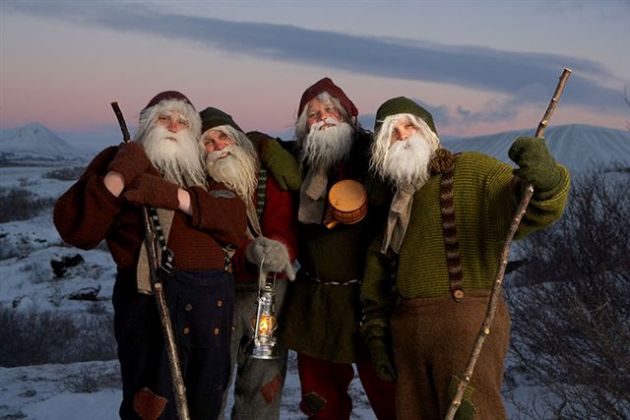 Icelandic children leave shoes on the windowsill and, on each of the thirteen nights before Christmas, one of the Yule Lads will visit to leave a gift. That’s assuming the child has been good, of course; naughty children don’t deserve a gift – they get a rotten potato instead. As punishments go, a rotten potato is much better than our traditional lump of coal (which could actually be quite useful, in the right circumstances). 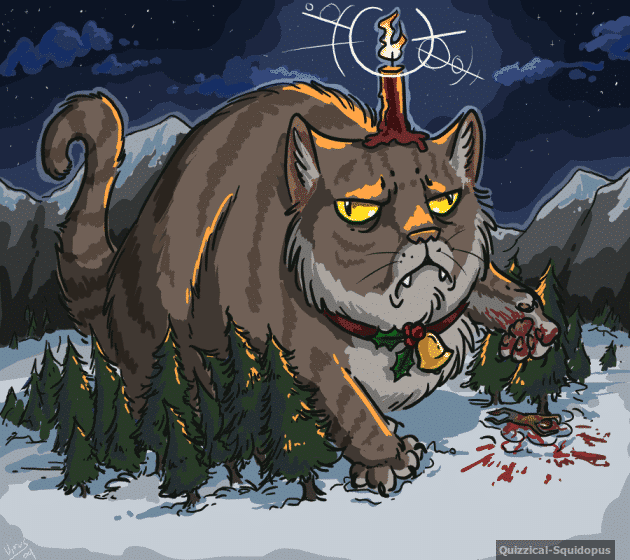 The Yule Lads are often seen hanging around with the Yule Cat, a monstrous feline who will eat any children who don’t receive new clothes for Christmas. This seems like a good idea. One Christmas, many years ago, I received a brown jumper that had been lovingly knitted for me by my mother. I wasn’t happy with this at all, and I made it very clear that I didn’t find clothes (knitted or otherwise) to be an acceptable Christmas present. It was a pretty ungrateful display and, frankly, I probably deserved to be eaten by the Yule Cat. Sorry, Mum. 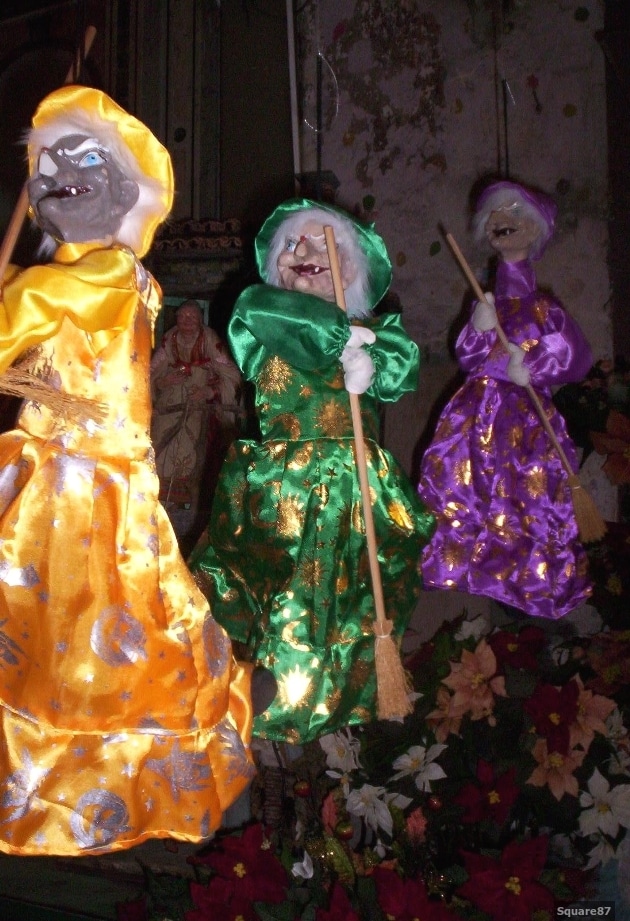 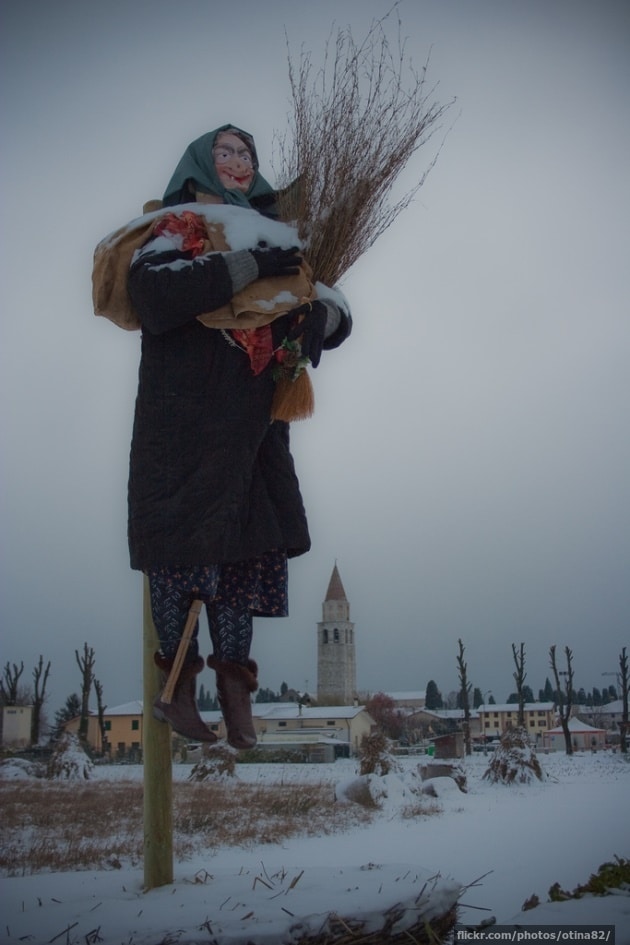 Apparently using the same magical powers as our Father Christmas, Befana manages to visit all of Italy’s children on the night of January 5th. She leaves sweets and presents for the good children and coal for the bad ones but, on the basis that every child is naughty sometimes, it’s tradition that everyone gets at least one lump of coal. Fortunately for the young Italians (who perhaps don’t appreciate the benefits of real coal), they’re often given coal-shaped sugarlumps instead.
The main purpose of Befana’s broom is to help her get from house to house, but its uses don’t stop there. After delivering the presents, Befana uses her broom to sweep the floor (perhaps intending this to be an extra gift for the parents). She doesn’t like to be seen at work, though, and anyone who catches sight of her is likely to get a whack from the handle end.

Translating as Father Frost, Moș Gerilă was Romania’s gift-giver for almost fifty years.
Before the 1940s, Romanian children’s presents were dropped off by Father Christmas (well, Moș Crăciun, as they called him). However, when communists took power in the country, they made the bizarre decision to ban Christmas. All celebration of the day was made illegal, and Moș Gerilă was introduced to bring gifts to the children on 30th December – the “Day of the Republic”.
As a physical representation of the state, Moș Gerilă was considered to be young and athletic (rather than old and overweight, like the Father Christmases seen in the decadent West). However, this handsome young Santa-substitute failed to win over people’s hearts in the same way as the chubby, bearded version and, when communism fell, most people went back to celebrating with Moș Crăciun.

Acting as a halfway point between Saint Nicholas and Santa Claus, Sinterklaas is often considered to be the model for our version of Father Christmas. I suppose his name sounds quite familiar, and he has got a big white beard, but there don’t seem to be many other similarities. 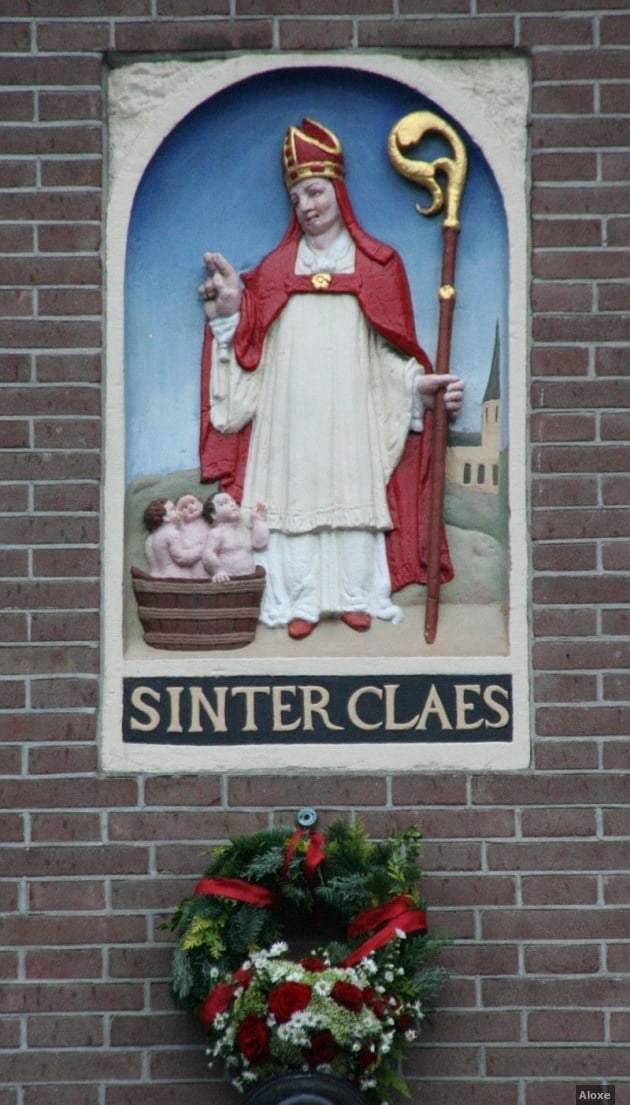 For a start, Sinterklaas doesn’t even visit on Christmas Eve – he turns up nearly three weeks early, on 5th December. And that’s not the only thing he gets wrong. Instead of living at the North Pole, Sinterklaas is thought to come from Spain and, rather than riding a sleigh (like he’s supposed to), he arrives in the Netherlands on a steamboat. Also, there’s one more important difference: Sinterklaas doesn’t have elves as helpers – he has black slaves called Zwarte Pieten. 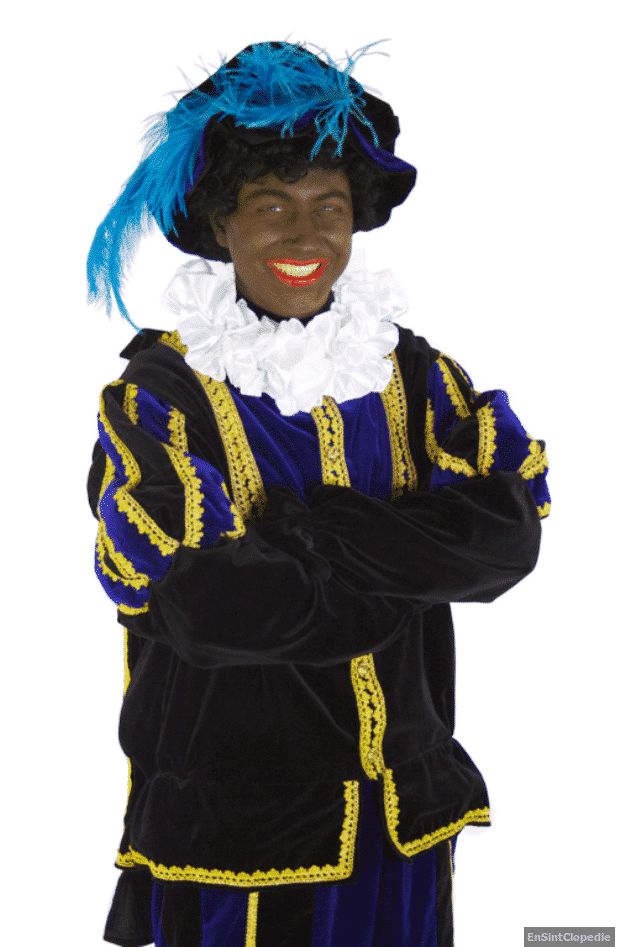 Tradition says that Zwarte Piet (Black Pete) was a slave, freed by Sinterklaas, who then decided to stick around and be his helper. The character was originally dim-witted, and was said to beat or even kidnap naughty children. These days, this version of Zwarte Piet has (understandably) gone out of fashion and Dutch children are now told that he’s black from going up and down chimneys (delivering the presents, not sweeping them). This is clearly a preferable explanation for Pete, but does rather ignore the curly wig and bright red lipstick still worn by many dressing up as the character.