Christmas is a time of tradition and ritual, such as singing “We wish you a merry Christmas” to the Christmas pudding as it emerges, alight, into the dining room… (OK, so that’s a personal tradition, but I have only just found this out. I thought everyone did this up until last year!)

This week, we will explain where and why Christmas traditions came about. Starting with pantomimes! 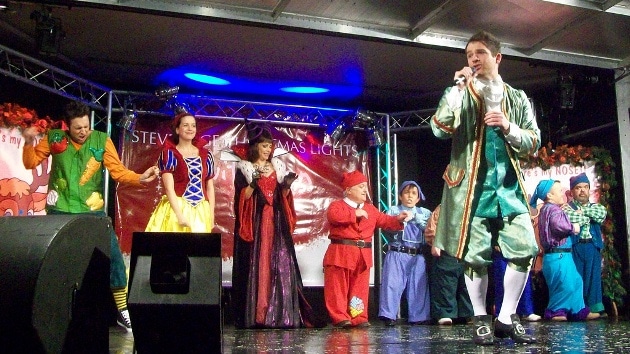 Let’s really have a think about pantomimes… How weird are they!? There’s cross dressing, audience participation, bizarre make-up and classic lines that are used no matter what the story is, such as “He’s behind you!” (Why the characters are unable to turn round in a timely or accurate fashion, I will never know.)

The word pantomime is Greek and roughly translates to “imitating actor”. Unsurprisingly, this genre started in ancient Greece and was very popular in Rome too, although it has always been looked down upon by the literary snobs for its base humour and general silliness! Over time the pantomime has evolved, due to various European influences, into what we see today.

But for many years certain elements have remained the same, and some of these elements are what tie panto to Christmas time. For instance, the gender role reversal occurs because during ancient Roman Saturnalia festivals (which took place between 17th and 23rd December), it was usual for the natural order of things to be reversed. So kings would become paupers and men would become women etc!

Traditionally, pantomimes began their run on what we know to be Boxing Day, to celebrate midwinter and other winter festivals. As time has gone on, however, pantomimes have started to show before Christmas, as Christmas is now the most prominent winter festival. 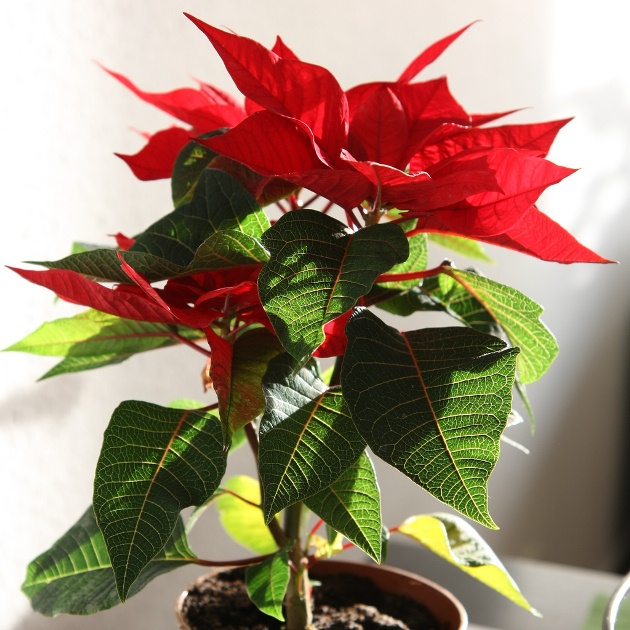 We see them every year – those big, bright red flowers that look like leaves. Or maybe it’s the other way round (leaves that look like flowers?)… Either way, poinsettias are inextricably linked to Christmas, but why? Well I’m not entirely sure how true this story is, but I am willing to believe it because it is lovely! 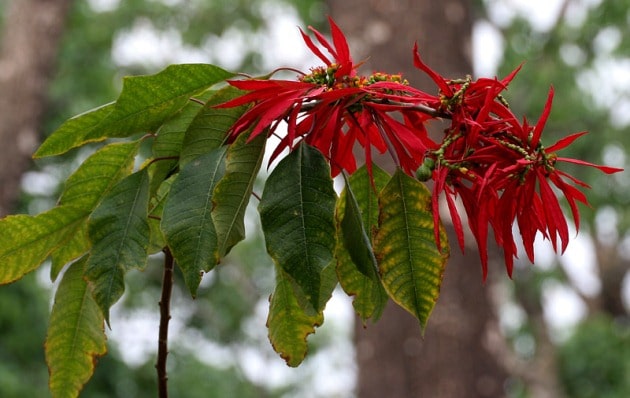 In 16th century Mexico, it was a tradition to give an offering to the baby Jesus in church every Christmas Eve. One year, a young girl named Pepita had nothing to give as she was so poor. On her way to church, not knowing what to do, she picked a bunch of weeds from the side of the road and attempted to fashion them into a pitiful posy. 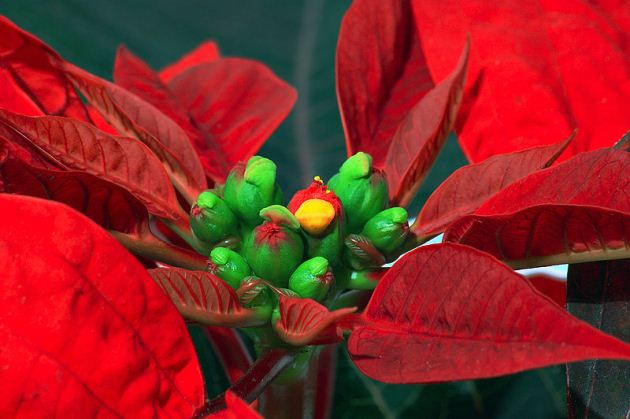 Entering the church, Pepita felt so ashamed of her gift, she started to cry, while the other children cruelly laughed at her. She laid her posy of weeds by the baby Jesus and left. The next day the “weeds” had bloomed into huge, joyous, red flowers! It was declared a Christmas miracle, and the weeds were weeds no more! 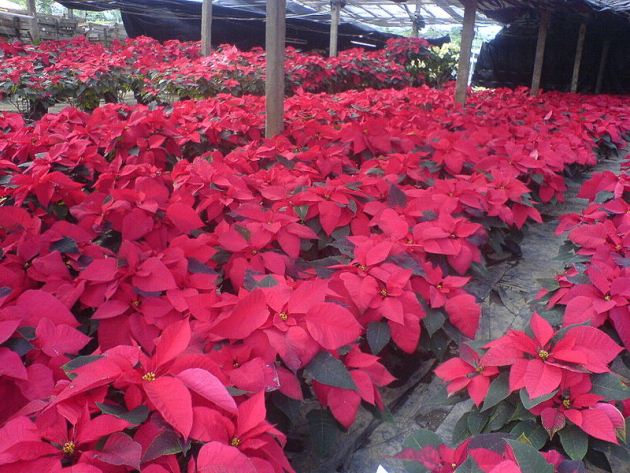 They were renamed “Flores de Noche Buena” or the “Christmas Eve Flower” and their place in Christmas tradition was cemented. 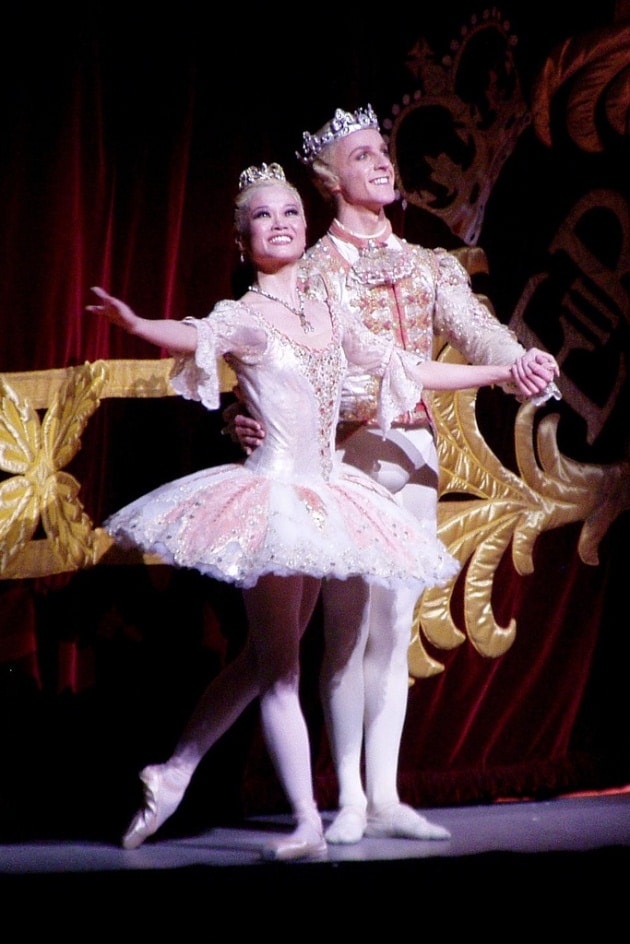 I know sugar plums are Christmassy because they’re mentioned in The Nutcracker ballet and in the poem “Twas the Night Before Christmas” but if I’m honest, I wasn’t entirely sure what a sugar plum was. I assumed it was a plum (obviously) glazed in sugar. Wrong. 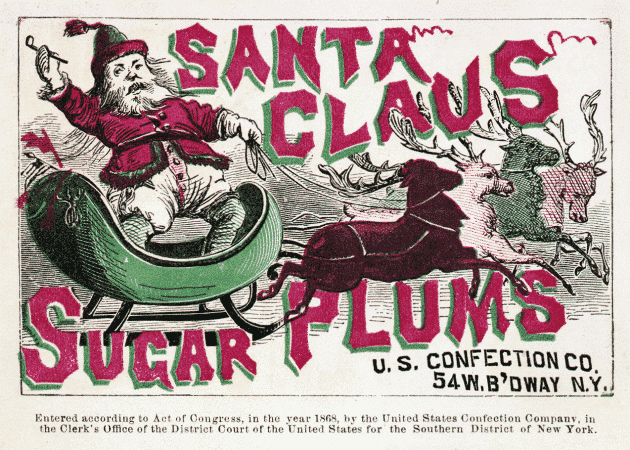 A plum, back in the day, used to mean any dried fruit. And the sugar aspect of it was in fact a hard sugar shell, a bit like a sugared almond. So sugar plums were hard-candy coated, finely chopped fruits.

In the days before international fruit importation, dried fruit was the only sort of fruit you were going to get come wintertime, and to have it sugar-coated was a Christmas treat.

Hmmm, delicious… I think there is probably a good reason why we don’t see these things any more! 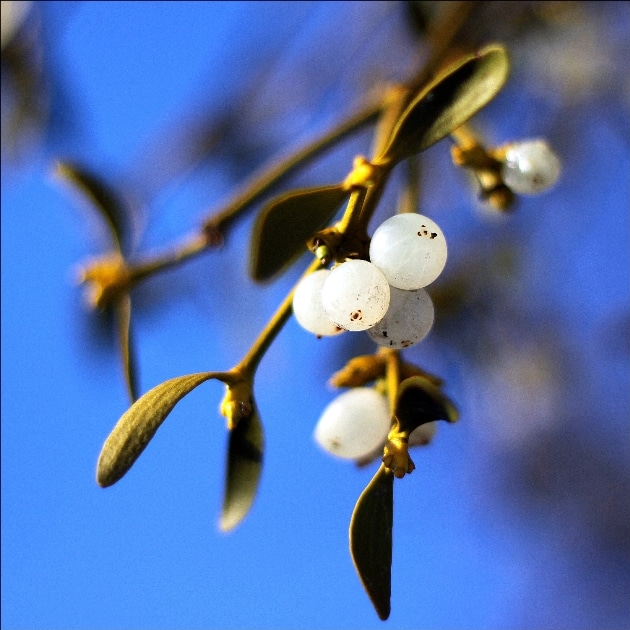 In my eyes, mistletoe can be used for good or evil. If you’ve been dying for a smooch with that special someone all year, mistletoe is your friend. But get caught under it by someone not-so-hot and you will have to oblige them… Thanks, mistletoe! 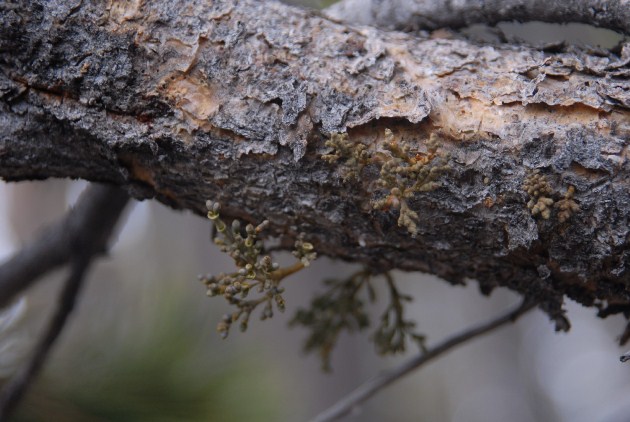 The origins of hanging mistletoe up at Christmas time comes from the Druids, again! Mistletoe is one of the only plants that are still green and alive during wintertime (much like holly), so hanging it in the home was thought to bring good luck and ward off evil spirits. 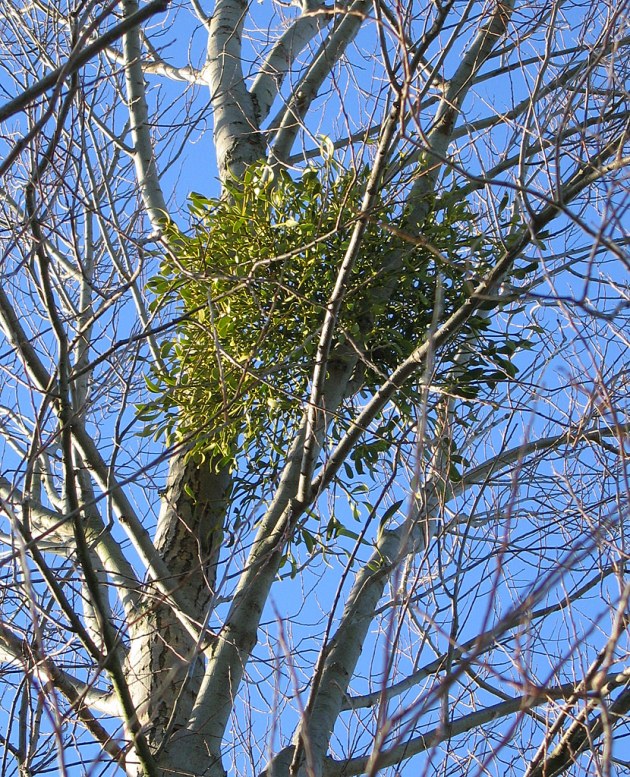 One theory as to why we associate it with love and friendship comes from ancient Scandinavia. Apparently, if you were to find yourself under the mistletoe with an enemy, it was customary to lay down your arms until the next day.

Another possible reason it’s associated with love, marriage and fertility is because some believe the berries, filled with a sticky, white fluid, represent – and I am quoting Wikipedia here – the “divine male essence” (and I think we all know what that means…), which is why we kiss underneath it! It doesn’t seem quite such a charming a tradition now does it?

CRACKERS | ENGLAND (BUT WITH A PARISIAN INFLUENCE) 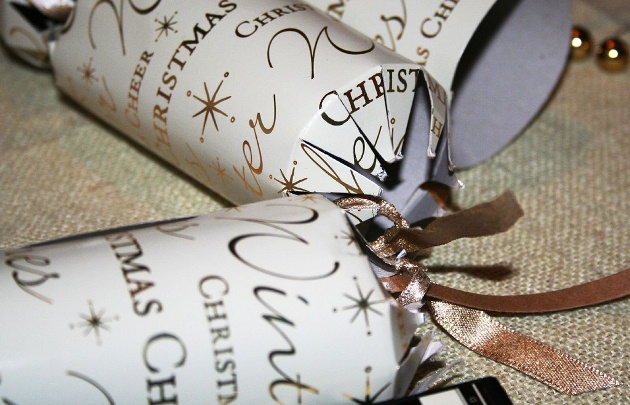 Oh the lovely Christmas cracker! Where else can you get such a fetching hat? In London, in 1847, confectioner Thomas J. Smith devised the Christmas cracker, having been influenced by some sweets he saw on holiday in Paris. 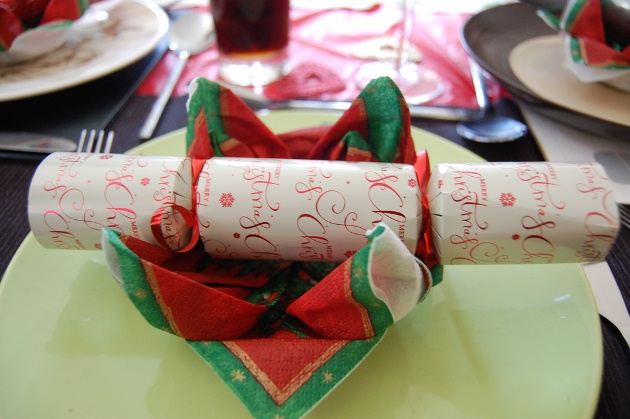 Whilst in Paris, Thomas’s children found bon-bons, sweets wrapped up in brightly coloured paper, and were thrilled and fascinated. So, in a bid to boost his waning sweet sales, Thomas started wrapping his sweets up, just like the Parisians. Once that novelty had worn off, Thomas started to insert mottos into his sweet wrappers, then later on, a snapping mechanism for added excitement. 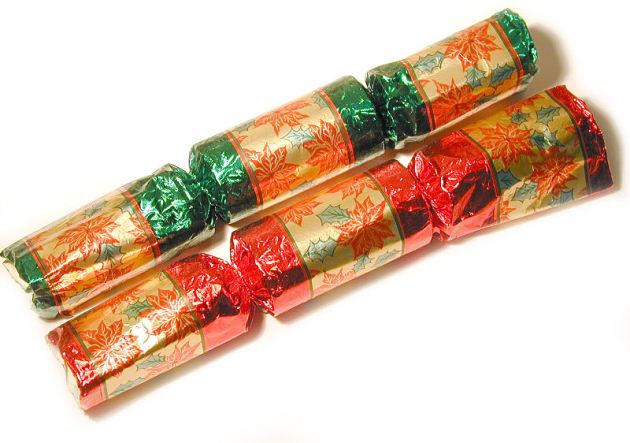 The size of the wrapper had to be increased so the mottos and the mechanism could fit in and eventually, the sweetie was left out and a small gift was included instead. This new product was called a cossack (I have no idea why)! Unsurprisingly, this name did not catch on and people started to call them crackers, for obvious reasons. 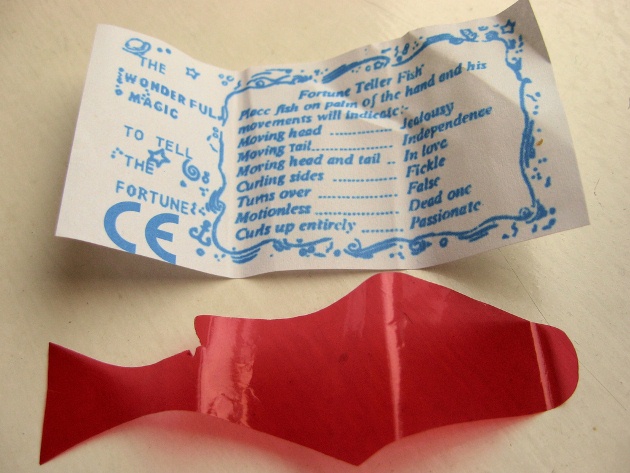 These did very well – so much so, that rival cracker companies started to spring up! So Thomas’s son, Walter, added extra elements so the Smith crackers remained the best! He included the beautiful paper hats, jokes and created the cracker design that we know and love. It soon became the fashion to decorate place settings for Christmas dinner with the ornate crackers, and so a tradition was born! 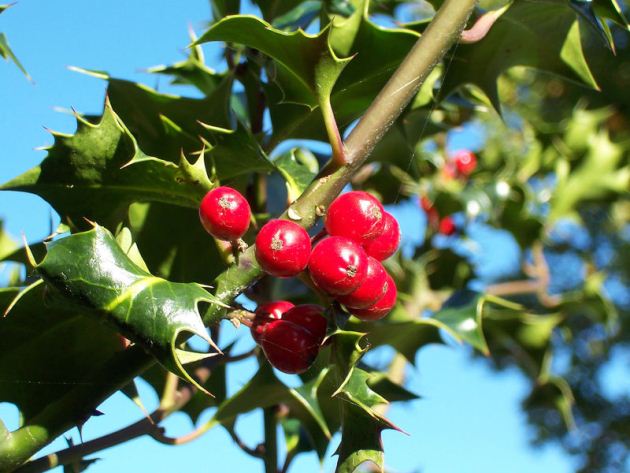 Holly – it’s on cards, in songs, on wreaths and used in all sorts of other Christmas decorations. But why is it so festive? After all, it’s quite a vicious plant, as plants go; all those prickles! Well, it’s used because it’s symbolic. 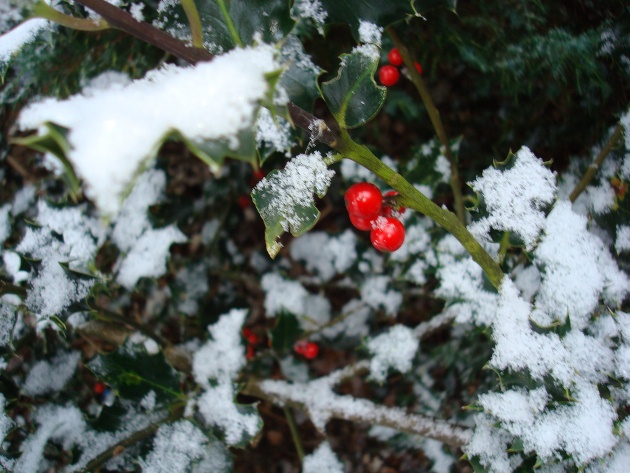 In pre-Christian times, Druids considered holly a lucky plant because whilst everything else died in winter, holly remained green and alive. And the red berries signified life and hope. So it was considered good luck to have holly in your home during the winter months, and incredibly bad luck if you were to cut down a holly tree! 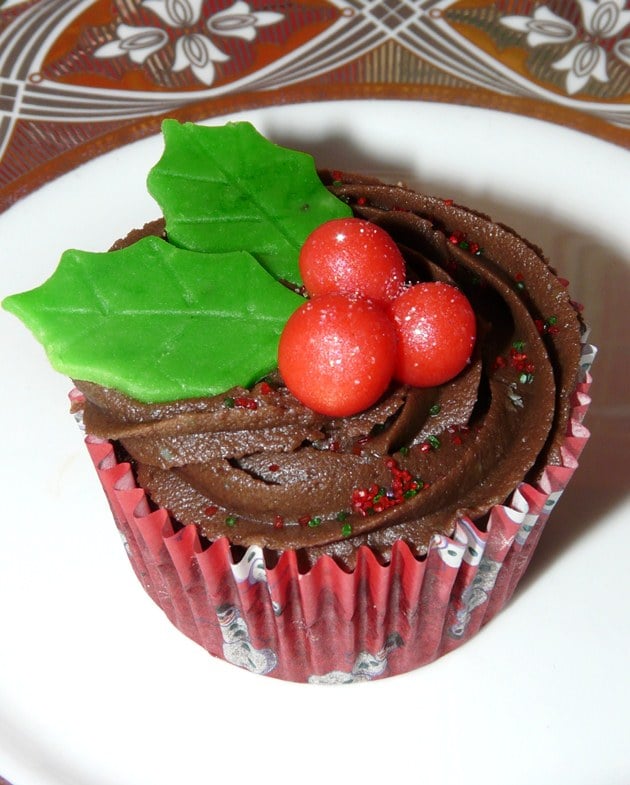 As Christianity started to spread across Europe, the symbolism of holly altered to fit in with Christian beliefs. The red berries symbolised the blood Jesus shed for mankind, and the prickles symbolise the crown of thorns Jesus had to wear on the way to his crucifixion.

Another Christian belief is that holly berries were once white, but as Jesus bled on them they were forever changed to red. 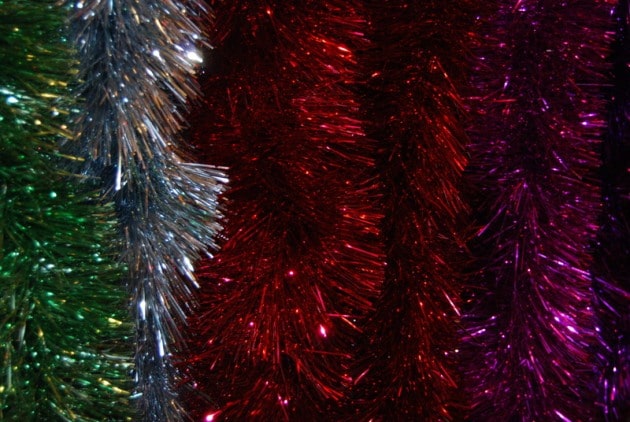 There is nothing more Christmassy than the smell of tinsel! If you’ve never really smelt it, go on, get your nose right in there! We have Germany to thank for this. The original idea, back in 1610, was to make Christmas decorations that looked like icicles or ice. 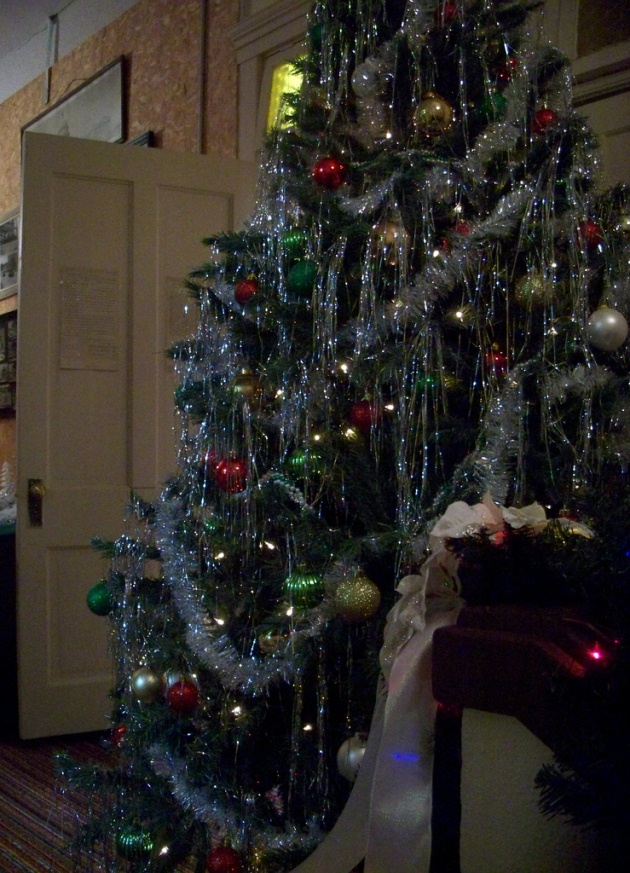 When it was first created, in Nuremberg, it was made from real silver (now that’s decadent!) The problem with that was that it tarnished quickly, and the amount of time you would have to spend polishing tinsel would be ridiculous! So, alternative materials were used, and up until the First World War, France was the world leader in tinsel production. (Incidentally, the word tinsel comes from the French world “estincele” which means sparkle!) 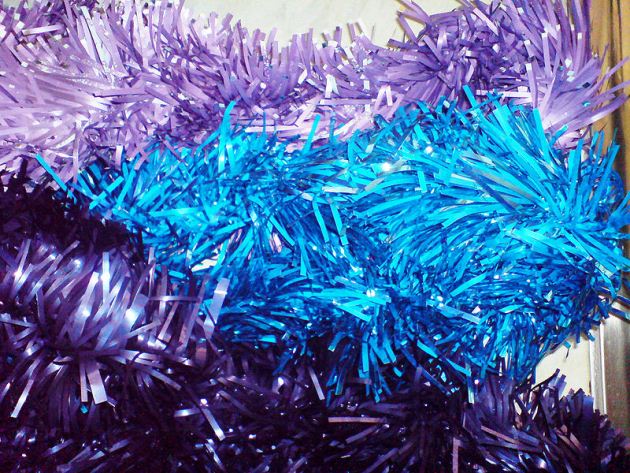 In the 50s, a lot of tinsel was made out of lead foil. Merry Christmas, have some lead poisoning! Although it was never declared an official health hazard, it wasn’t ideal, and once the risk was recognised, lead tinsel stopped being produced.

These days tinsel is made from PVC finished with metallic coat. It is said that this plastic tinsel doesn’t hang so well, but I think I would prefer this to having to polish my tinsel, or have it poisoning me!

If you’re going away at Christmas, or at any other time, don’t forget your travel insurance! You’ll be covered for cancellation, lost presents, and emergency medical expenses. Unfortunately, there’s no cover for kissing the wrong person under the mistletoe!