Playing cards are an essential part of any holiday – whether you’re waiting hours at an airport or spending a rainy week in a caravan, there’s almost always an opportunity to get the cards out for a quick game. However, next time you’re cheating your way to a solitaire victory, spare a thought for any bored Spanish holidaymakers – they have to fill their time with an entirely different (and entirely confusing) set of playing cards. 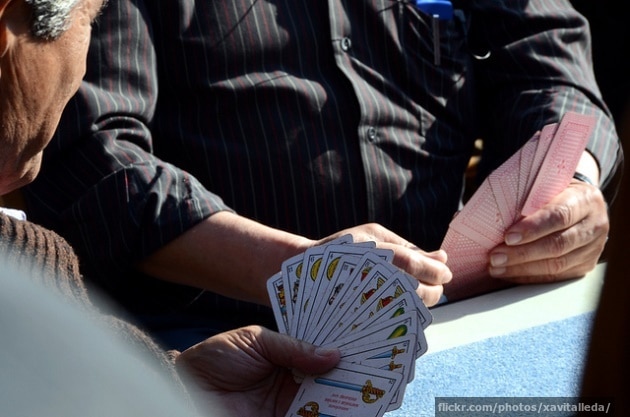 Most people in the UK are familiar with only one type of playing cards – the normal, proper ones. Sometimes a deck of cards might show images of wanted Iraqi fugitives (or naughty pictures of ladies), but the cards themselves will still follow the same pattern – four suits and thirteen cards of each; including a king, a queen and a jack. In Spain, the baraja española (the Spanish deck) ignores almost all these standards – it’s a 40 card set which misses out some of the numbers and has completely different suits.

Just like (what we think of as) a regular pack of playing cards, the Spanish deck uses four distinct suits – coins, cups, swords and clubs. At first this sounds like they’ve at least got one of them right, but unfortunately not – their clubs are the sort of clubs you hit people with, rather than that strange bobbly shape we use.

The baraja española seems quite violent – it’s got both swords and clubs (and you can throw a cup at someone). In fact, the suits are supposed to represent the social classes as they were in the middle ages: coins for the merchants, cups for the church, swords for the military and (perhaps tellingly) clubs for the peasants.
There are ten cards in each suit but, rather than simply running 1-10, the Spanish have decided to ignore the numbers eight and nine completely. Cards one to seven display the appropriate number of whatever suit they are (for example, three coins or four swords) while the cards for 10-12 have pictures of nobility. There’s a card showing a prince where we’d expect a jack (but what is a jack anyway?) and instead of a queen they have a knight on a horse. The king is the same though, so that’s a bit of a relief.
https://www.youtube.com/watch?v=YzY9AtdJLZ4
If you want to play a game with Spanish playing cards, why not try la brisca? In this game one suit is trumps and players try to win tricks by laying cards of a higher value than their opponents. Aces are worth 11 points (which sounds familiar) but kings are not worth 10. Threes are worth 10 and the cards showing knights are worth three. Kings score four points. The card that has a prince on it is worth two, but cards two to seven are worth their value (except the threes, as already explained). Anyway, I hope that’s all clear. Enjoy the game!

If you’re travelling to Spain, remember your travel insurance! You’ll be covered for cancellation, medical expenses and lost baggage or personal money (but not personal money that you’ve lost gambling on a confusing card game).