If you’re a little squeamish (or you’re eating something), you might want to give this one a miss…

We’re all going to die (except me, hopefully) so what better way to spend our remaining time on earth than by thinking about what happens to the corpses we leave behind? (Pretty deep subject for a travel insurance blog right?) Here in Britain, funeral services are pretty standard – everyone wears black and a CD of My Way is played – but around the world, there’s a bit more variation. If you don’t fancy spending eternity in an urn on someone’s mantelpiece, why not make it your final wish to follow one of these traditions? 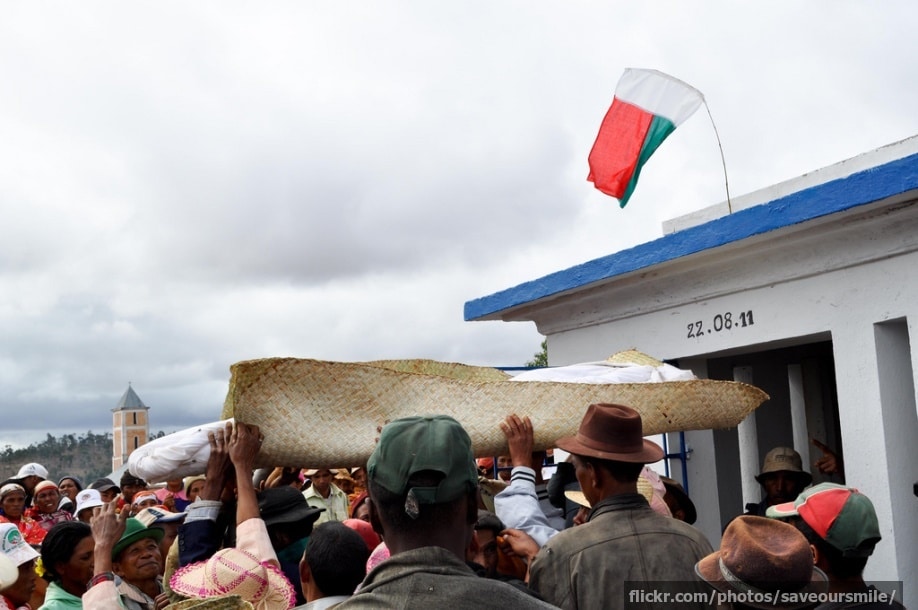 The turning of the bones

They put you in a box then they put you in the ground – that’s the end of it, right? Usually it would be, but not in Madagascar. Every five or seven years, a ritual called “the turning of the bones” takes place – families open their ancestral crypt, take out their decaying relatives and have a little party. First, the old bones are sprayed with wine or perfume (otherwise they’d spoil the festivities), then the families dance with them and talk to them about what’s been going on since they were last about. If I’m honest, it sounds pretty similar to most other family parties. 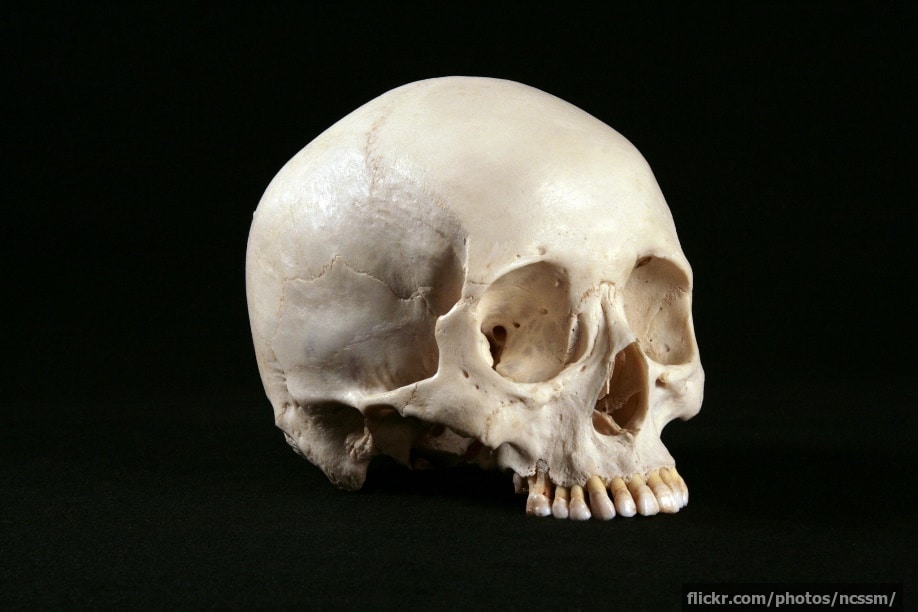 The dead can’t get any peace on the Pacific island of Kiribati, either. Here they perform “skull burial” – a practice that is actually the complete opposite of what its name suggests. Skull burial starts off like a normal burial, with the whole body going into the ground, but it only stays that way for a few months. After this, the body is exhumed and the head-bone is removed, cleaned, polished and offered something to eat. The now sparkling skull is kept in the family home, while the rest of the body is put back where it belongs. If you want to be buried and stay buried, you can still have some fun with your coffin. In Ghana, rather than using boring brown boxes, colourful coffins are custom-made to suit the deceased’s personality or profession. For example, a fisherman might be buried in a big wooden fish or a musician might be stuffed into a pretend piano. 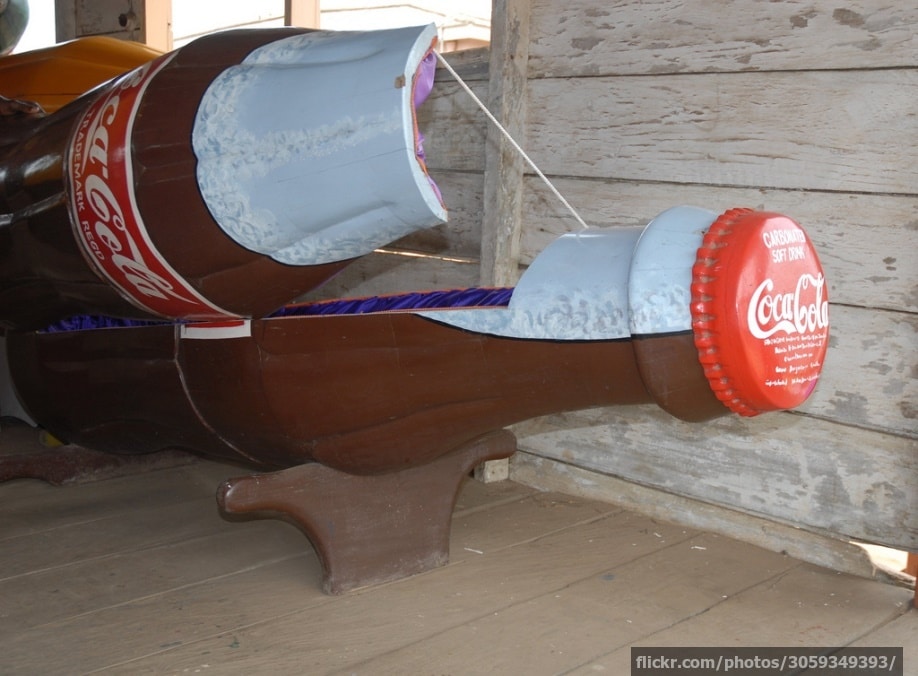 Why not have a little think about what Ghanaian coffin your bereaved relatives might pick for you? And, if you’re not happy with their choice, consider changing career now, before it’s too late. 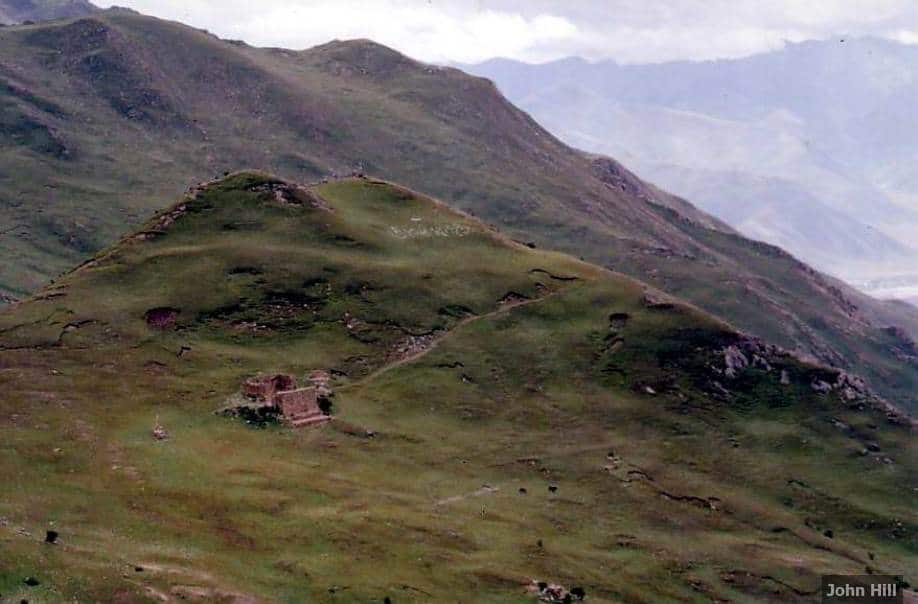 Compared to burial or cremation, the idea of just being left somewhere to decompose is quite attractive – it’s peaceful, your body can return to nature and you’re not going to be in any trouble if you unexpectedly wake up. Tibetan “sky burials” work on the idea that, once the soul has departed, the body is just an empty vessel that needs to be disposed of – and feeding it to the local wildlife seems like the most generous way. Unfortunately for anyone looking for pictures of sky burials, the deceased person isn’t simply left on a mountain – to make things easier for the vultures, the corpse is completely taken apart, with even the bones being sledge-hammered into edible chunks.

Sky burial ceremonies should be conducted by lamas (that’s the holy men, not the four-legged Peruvian mammals – just one “l”, you see). These lamas chant and burn incense, as well as overseeing the body’s disassembling.

If you like the idea of being left outside, but don’t really fancy the “chopping up” aspect of sky burial, maybe you can book a place in one of China‘s hanging coffins. These are normal-looking coffins but, rather than being put underground, they’re left perched on a cliff face. It’s unclear exactly what led to this tradition, but one possibility is that it had something to do with the deceased getting closer to God (although, in that case, surely they’d have put them at the top of the cliff rather than only halfway up). Another possibility is that it was done to keep the bodies out of reach of animals; which seems a bit selfish now we’ve learnt what the Tibetans go through trying to do the opposite. 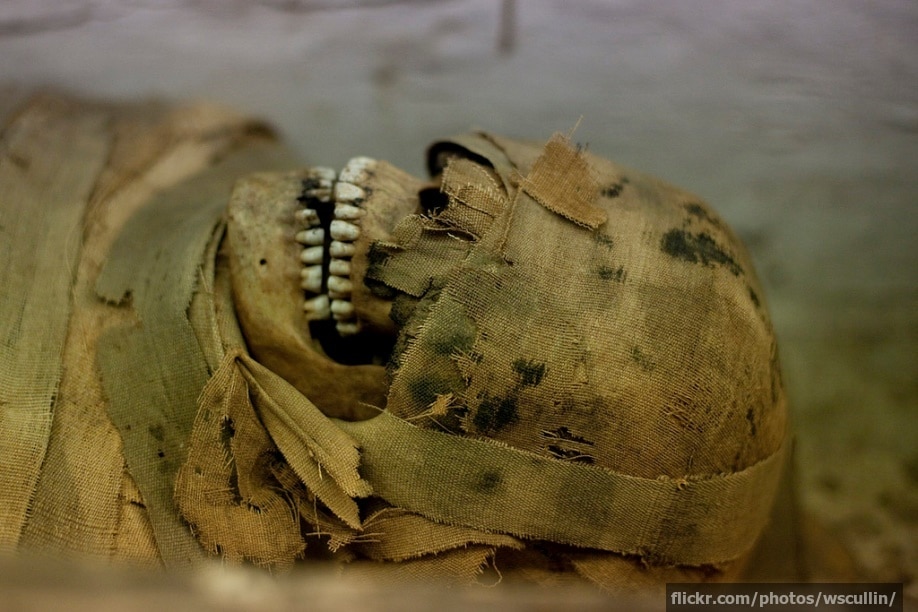 As anyone who has ever wrapped themselves in toilet paper knows, the most famous mummies come from Egypt. The ancient Egyptians didn’t use toilet paper, of course; they used layers of linen cloth. They also took out all the body’s internal organs – that’s another difference – and instead of going to a fancy dress party, these mummies were entombed beneath a pyramid.

The first Egyptian mummifications probably occurred by accident – shallow graves and dry desert air helped to prevent the bodies from decomposing. Later, it was decided that a well-preserved body (albeit an incomplete one) might be some use in the afterlife, and deliberate mummification became more widespread. 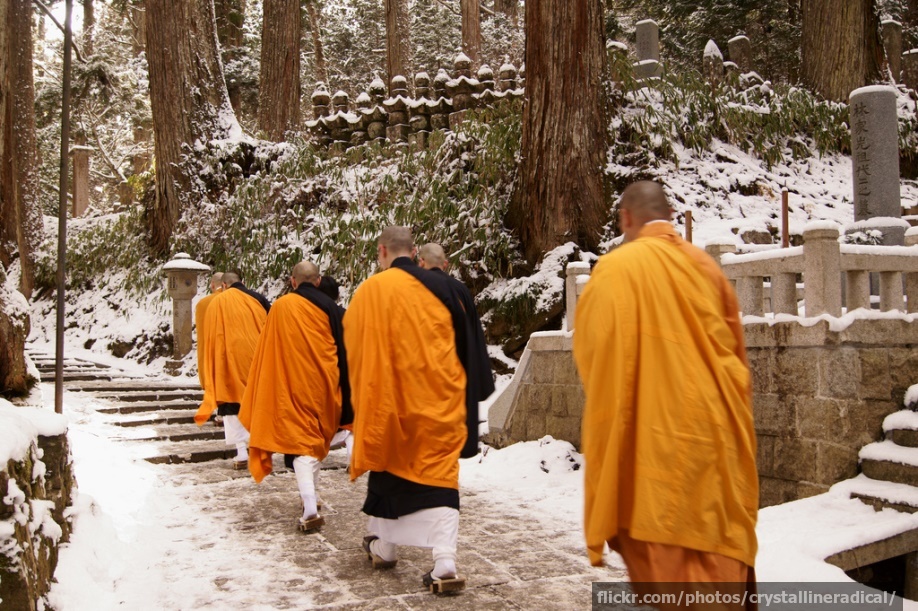 If you want to be mummified, but don’t trust your loved ones to carry out the process, you can always try mummifying yourself. Some 19th century Japanese Buddhist monks were very keen on this idea, and many of them went through the gruesome preparations. The most important thing for a mummy is to be dry, so the monks would try to get all the moisture out of their bodies – this involved a diet of just nuts, seeds and bark. They were allowed to drink, but what they drank was a poisonous tea that made them expel even more liquid (if you get my meaning). Eventually, when the Japanese monks were wrinkly enough, they sat in the lotus position and waited to die, which probably/hopefully didn’t take too long.

In Britain, cremation is the most popular (well, most widespread) way of dealing with an unneeded body. A normal funeral service is held and later the family are given a tub of dust – they don’t really get involved in the actual burning. However, this isn’t the case everywhere.

In India, Hindu funerals insist that the body is cremated. Traditionally, open funeral pyres have been used, with the deceased’s eldest son having the honour of lighting the fire (a bit like on bonfire night when, if he’s lucky, the eldest son might be allowed to set off a catherine wheel). 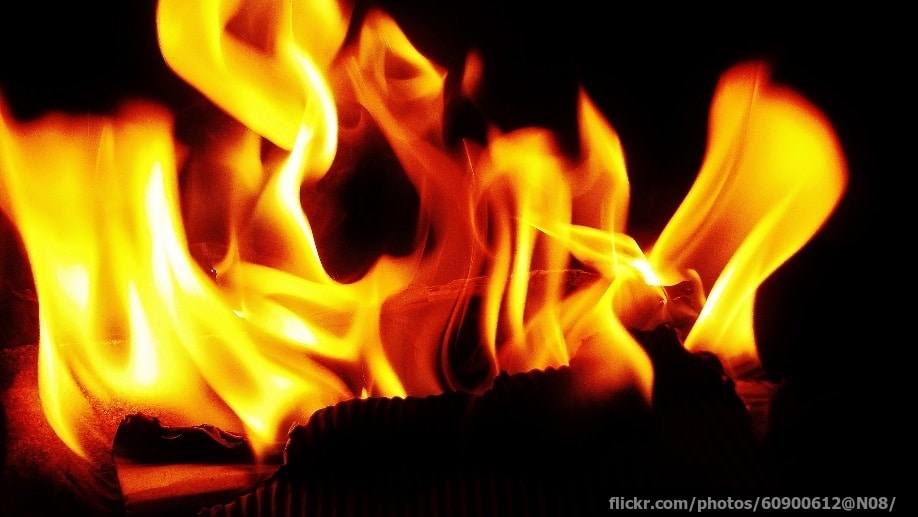 Another Indian tradition is the practice of sati – where the widow of the deceased gets in the funeral pyre with her husband. This was a recommended course of action in the twelfth century, but is now against the law (although, as with every other law, there are people determined to break it). The widow’s decision to commit sati is supposed to be voluntary, and there is concern that some women could be coerced into it – either by societal pressure or by being poked into the fire with a stick.

Japanese cremations – which make up 99.8% of Japanese funerals – are similar to British ones, with the exception that the family get to mess around with the ashes. Once the cremation is complete, the remains are scattered on a table and the relatives of the dead person get their chopsticks out. They then carefully go through the ashes, picking out any bone fragments and putting them in the urn – custom says that the foot bones have to go in first to ensure that the body will be the right way up. Sometimes, two people will pick up the same bit of bone at the same time, and this is the only occasion in Japanese culture when it is acceptable for two pairs of chopsticks to be holding something – normally it would be a social faux pas, but apparently it’s fine if what you’re holding is a piece of your uncle’s jaw bone. 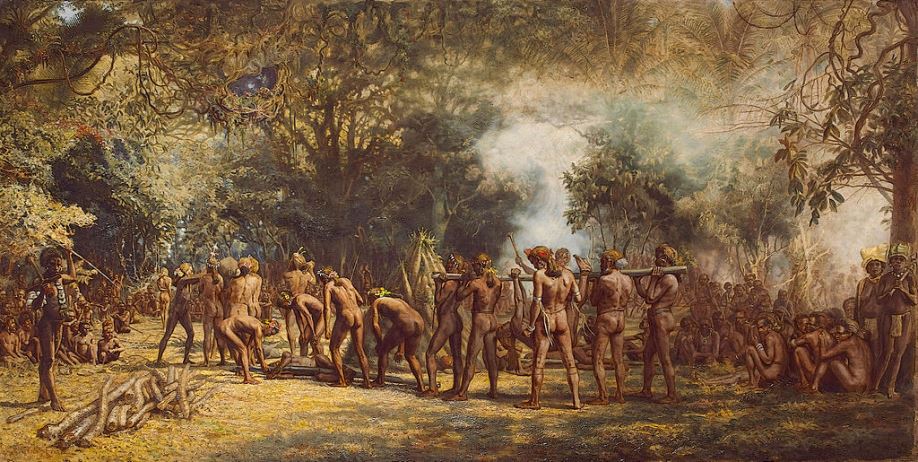 A cannibal feast on Tanna, Vanuatu

It’s generally frowned upon these days, but cannibalism has existed throughout history. There’s evidence that Neanderthals ate each other, and it’s possible that modern humans might have eaten them (perhaps in a misguided act of revenge).

Most modern cases of cannibalism have occurred out of grim necessity, but there are a number of cultures with a tradition of happily eating people. Fiji was once known as the Cannibal Isles, while the word itself comes from the Carib tribe in the West Indies – basically, the practice occurred everywhere from Africa to New Zealand (including Europe, although it was a very long time ago). The Korowai people of Papua New Guinea are thought to be one of the last remaining tribes to engage in cannibalism; although it’s possible they’re just saying that to tempt (very brave) tourists to the area. 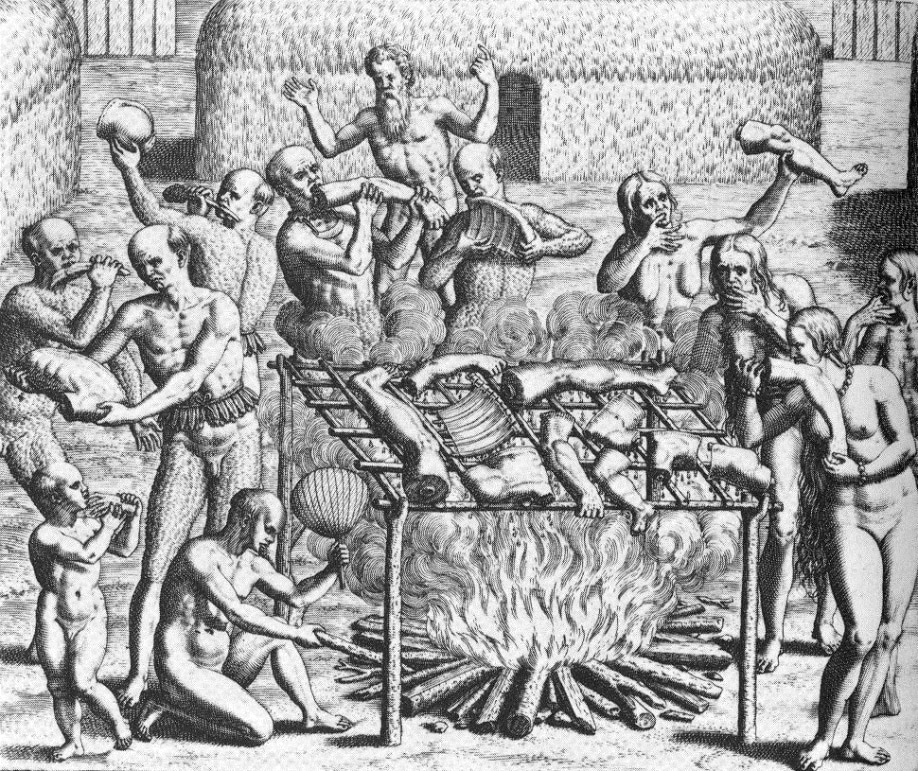 An engraving of cannibalism in Brazil

Ritual cannibalism comes from the idea that by eating a dead person, you may gain some of their characteristics – you are what you eat, after all – so it almost makes sense that eating a powerful warrior might help you become one. From a cannibal’s point of view, burying the dead in the ground is probably an immoral waste; surely it’s better to put that body to some use, feeding people who are still alive?