In Britain, the words “May Day” conjure up images of men morris dancing (ie jumping around with wooden sticks and bells on their knees), girls dancing around a 10-foot ribbon-adorned pole and the election of a May Queen. However, our European counterparts celebrate the day in many different ways…
May Day is traditionally celebrated on the 1st May and is a celebration of the first day of summer (if someone would like to inform the weather of this, that would be great!). It originates from Pagan tradition and celebrates fertility and hope for the forthcoming months. Or the way I like to see it, another excuse to party and have a few ciders in the evening sun! In some countries, mainly on the American continent, it is known as Labor Day and is used to highlight and celebrate workers’ rights.
If you plan on checking any of the below festivities out, make sure you have your travel insurance in place before you go. 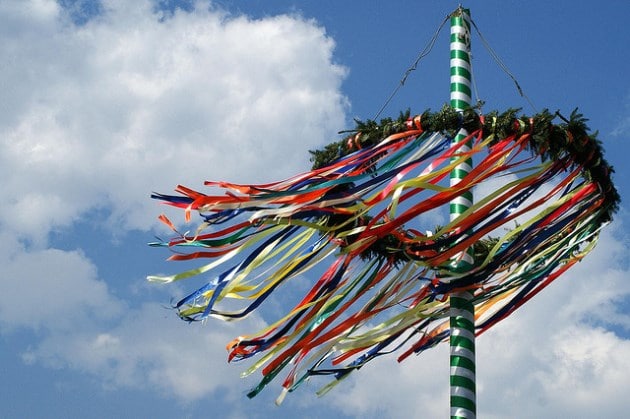 The Germans love a good party and celebrations for May Day start the evening before with a bonfire, plenty of booze and a whole lot of dancing to see in the summer months. In Western Germany, it is traditional for men (except on a leap year when roles reverse) to deliver a maibaum (German for maypole) wrapped in coloured streamers to a lady they wish to declare their love to. Beware though – if you receive a pole wrapped in white streamers, it means you are disliked. I do wonder, though – why go through all the effort to tell someone you dislike them? And does the receiver then whack the giver over the head with it? 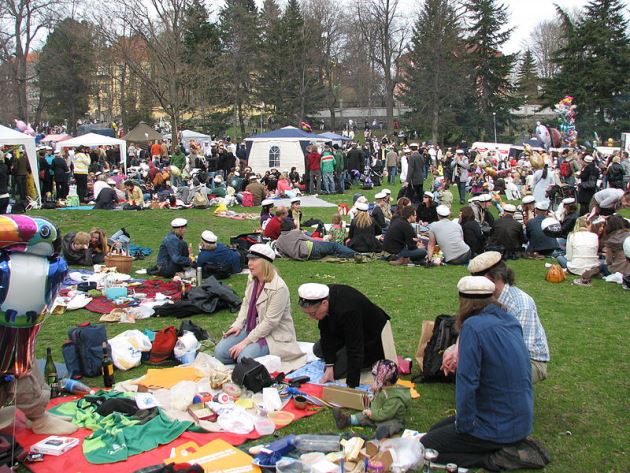 Again, festivities begin on the evening of the 30th April and start with the “crowning” of statues around the main towns in the country. This is usually done by students who wear their student caps from this day until the end of September, when they then get a winter version. 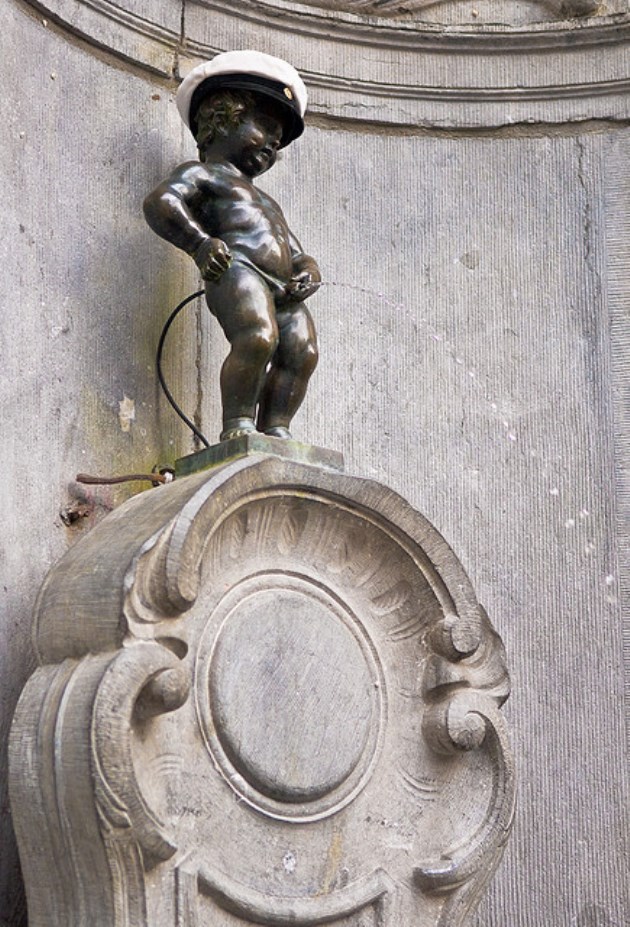 This is then followed by a party where people (usually students; it’s always the students!) eat, drink and dance the night away. May Day (or Vappu, as its known) consists of a mass picnic where people wear their caps and decorate their picnic area with streamers and balloons. They also drink a special lemonade concoction of lemons, brown sugar and yeast called sima, which contains the teeniest amount of alcohol so children can enjoy as well. I’m sure this can be adulterated as well… Vodka mixer, anyone?

The Swedish go all-out for this festival, named Walpurgis Night or Valborg. Many different celebrations are held throughout the country. It is celebrated on the last day of April and the main tradition is to light huge bonfires, which are believed to scare off predators, which is important to the Swedes as their livestock are led out to graze on this day. Although, wouldn’t this scare the livestock away? Or maybe even cook it, thus spreading the smell of lamb for miles around? I don’t know. I’m sure the Swedes have it more under control than I would!
Apparently, it’s the university towns that celebrate the hardest, and the day often starts with champagne and strawberries (Swedish students are a little bit flashier than us Brits) followed by barbeques, a few alcoholic tipples and just generally enjoying the day. In Uppsala, an old university town, the students have raft and champagne races, which is quite simply people spraying champagne (or more realistically, sparkling wine) at each other! I find this quite shocking, though… Who’s heard of students willing to waste even a drop of alcohol? It wouldn’t have happened in my uni days! 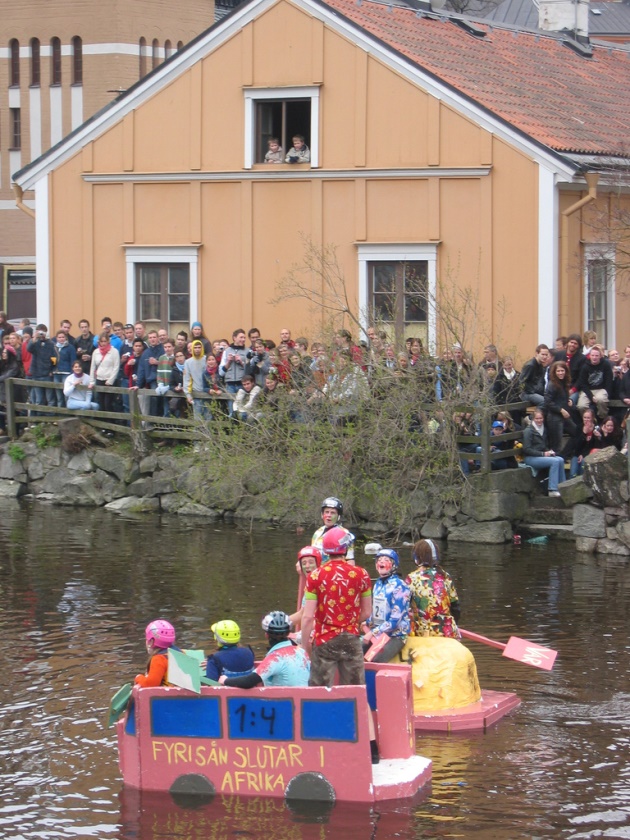 In the city of Gothenburg, a huge carnival called the Cortege is held at Chalmers University of Technology and around 250,000 people attend each year. Geez, these guys take their beginning of summer festivities seriously! 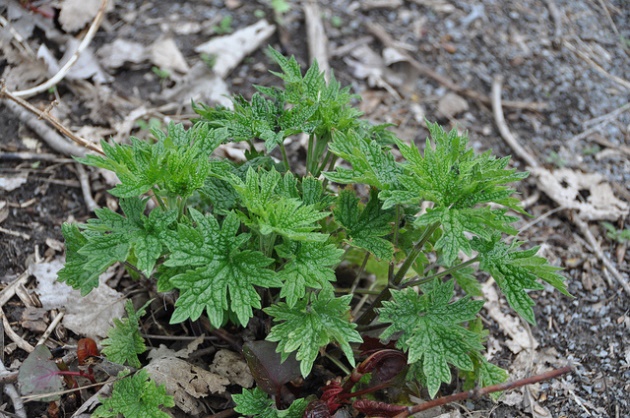 Arminden, as May Day is known to the Romanians, is a celebration of the summer and the crops and animals of the land. It is said to be celebrated so that the people of Romania can enjoy good wine in autumn (from the sun soaked grapes, I assume) and to ensure they’re blessed with good health and protection from the elements. Romanians make sure they eat very well on this day, and feast on lamb, mutton cheese washed down with a cool glass of mugwort wine. Sounds like a concoction straight out of Harry Potter!
To promote good luck and prosperity, people hang green branches over doorways and animal shelters and these are left in place until the harvest season. The day before is a good day to be female in Romania, as women aren’t allowed to work inside (as well as outside) the home due to superstitions that if they do, the village will be struck with terrible storms. For Romanian men, this is fine. So hurrah – I’ll just put my feet up, thanks!
So it seems the Europeans have got the right idea about celebrating May Day, and most traditions seem to encourage drinking, partying and setting things on fire! Somehow, our morris dancing just doesn’t seem as exciting after all!
Photo credits: Awaya Legends, JIP, Teemu Mäntynen, eimoberg and USACE Buffalo