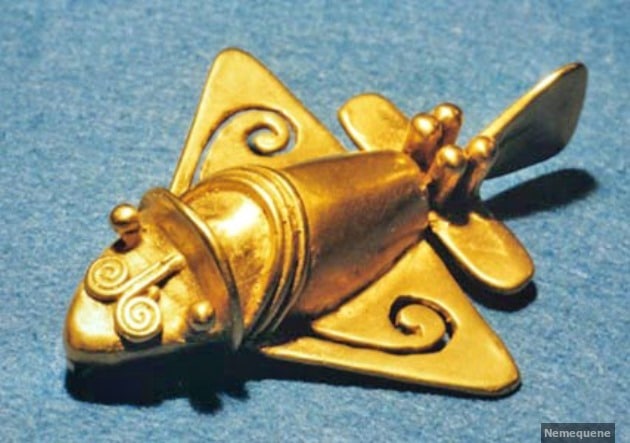 According to “conventional” history, powered aircraft have only been around since the beginning of the twentieth century. So, if this is true, why were the Quimbaya civilisation making little model aeroplanes a thousand years ago?

While there’s no argument over the origin of the objects, there is a difference of opinion about whether they really represent flying machines. Critics of the theory say that the Quimbaya artefacts can’t be aeroplanes simply because the civilisation didn’t know how to build aeroplanes, but this seems like pretty poor reasoning – the little models are interesting precisely because they appear to show something that people at the time wouldn’t have known how to build. (I wonder if they also pondered travel insurance?)

Having said that, it is a bit suspicious how they seem to show planes exactly as they are today, rather than at any other point in history (either past or future).

Many other little gold objects from the Quimbaya civilisation clearly show birds or fish, suggesting to some that the “aeroplanes” might actually be highly stylised models of these. However, experiments have been done to show whether the proportions of the models would allow them to take to the air. In one test, radio-controlled versions of the Quimbaya aeroplanes were able to fly, which is quite impressive – and all the researchers needed to do was change the scale, change the design and add a motor.