Home » Blog » Maneoveuring Through the Munros 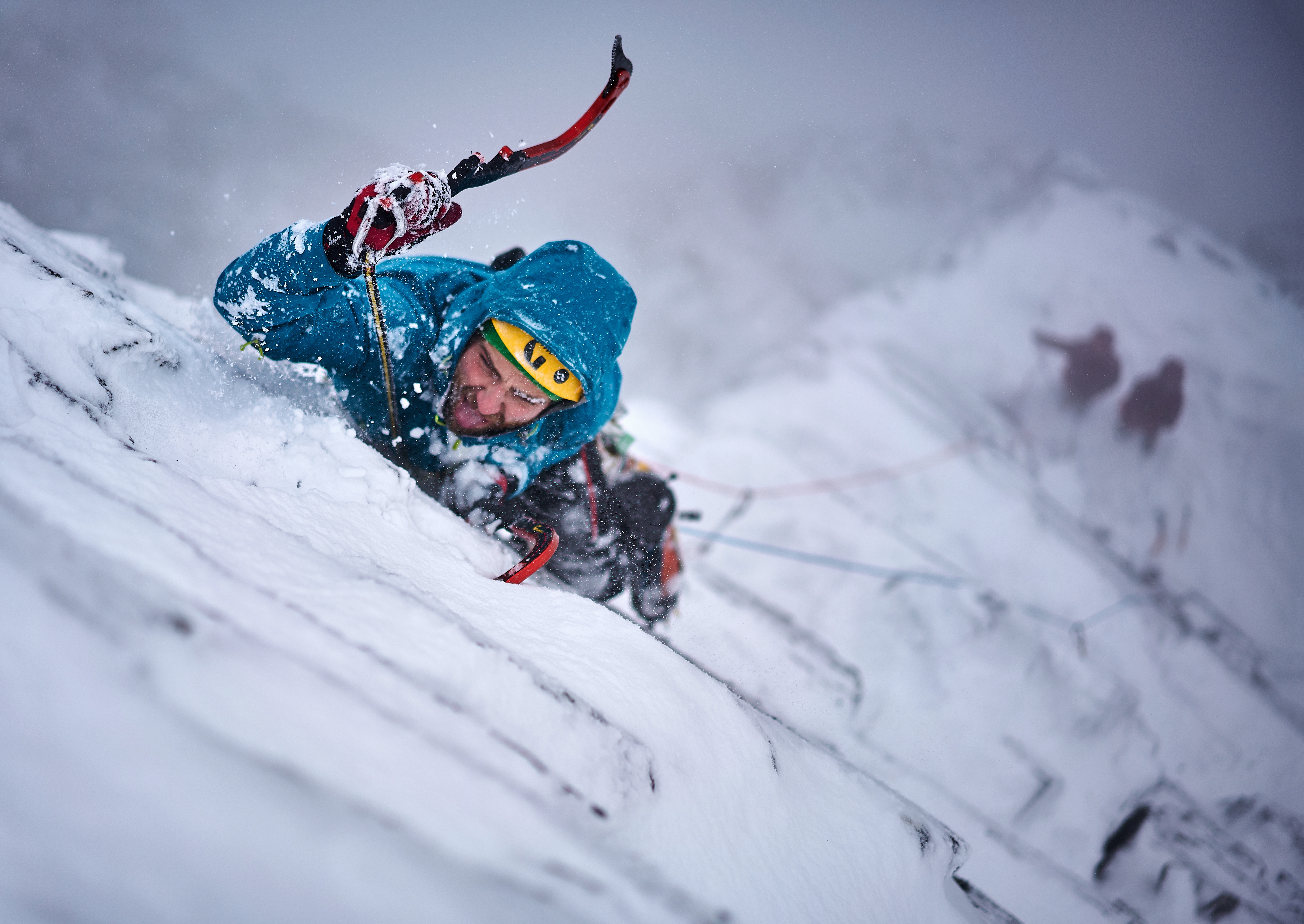 Hamish Frost is a professional adventure sports photographer, based in Scotland. After being inspired to take up mountain sports photography, he quickly became in demand and worked on projects in places such as Antarctica, the Himalayas and the Alps. Although Hamish has travelled all over the world, the Scottish mountains in his back yard, keep him going back for more and push him to his limits.

My journey to becoming a mountain sports photographer was a non-traditional one. Photography was never something I studied formally and despite early experiences in the mountains through scouts, it was only recently that I really became passionate about spending time in them.

After graduating from Glasgow University, I began a job working in the energy sector. Around the same time, I started ski touring in Scotland and I quickly became hooked, spending almost all of my spare time exploring the Highlands on skis. During the spring, when the days got longer and there was still snow up in the mountains, I’d regularly find myself racing over to Glen Coe after work, just making it over in time to climb to the top of a munro and ski one line before sunset.

On one occasion in July (after a particularly good winter), myself and a friend got up at 1am, cycled with our skis on our backs into the heart of the Cairngorms, just so we could ski the last remaining gully in Scotland with snow in it, making it back down the road in time to sneak into the office for 9am. I’d be lying if I said it was worth it for the skiing itself, but it was the kind of adventure that definitely put a smile on your face for a few days afterwards. 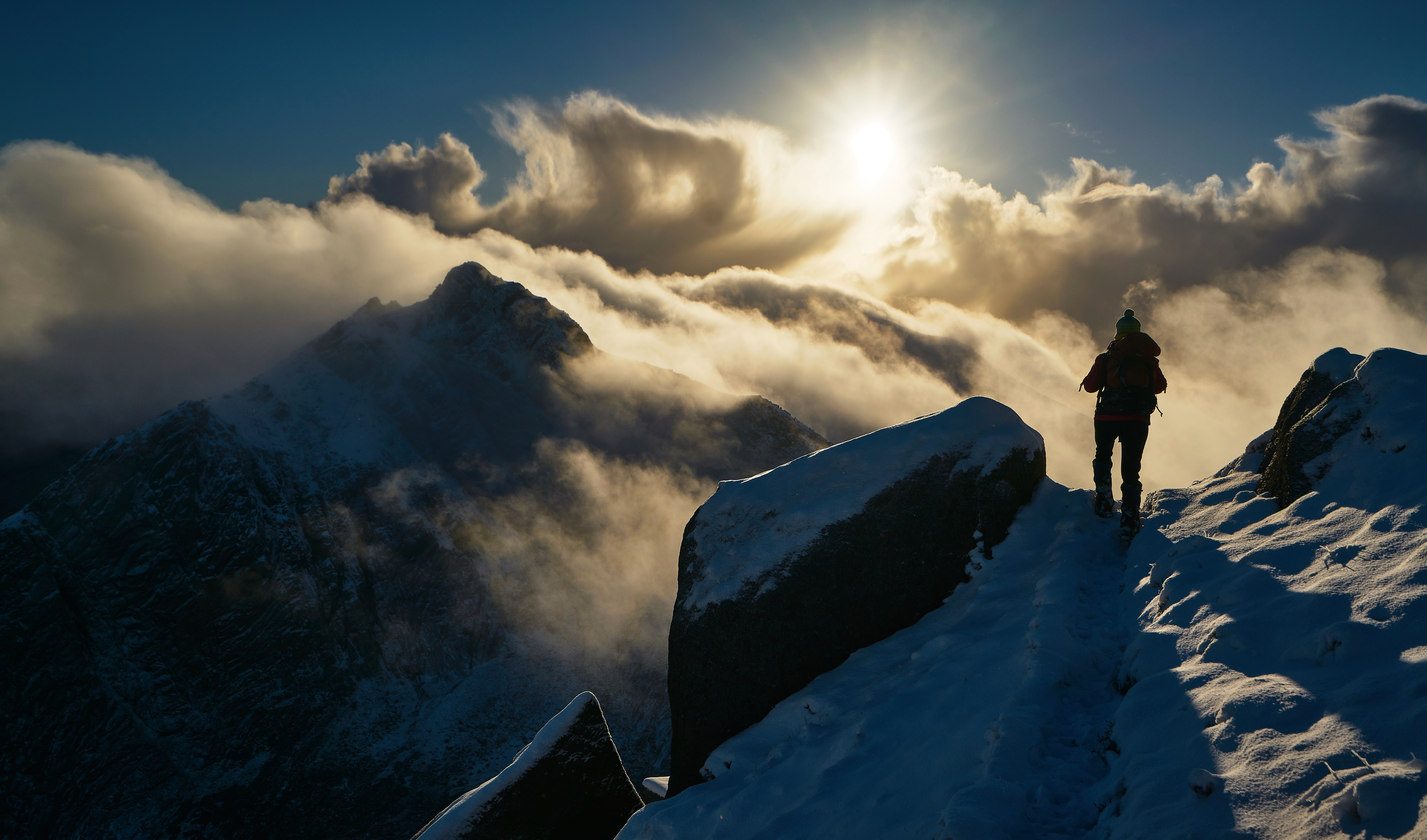 I began following the work of various adventure and mountain sports photographers based in places like the Alps and North America. Inspired by the images they were producing; I’d take a camera out into the mountains with me and try to replicate what they were doing. It was through posting the photos I was taking on social media that I eventually started to get offers of photography work, and it wasn’t long before I began to entertain the idea that it was something I could perhaps make a living from. Six months later I took the decision to leave a good, stable job, with a regular income and good prospects for the future, to follow an uncertain career path, working from job-to-job as a mountain sports photographer. It felt like easily the biggest decision I’d had to make in my life and it took me most of those six months to pluck up the courage to finally make it. Yet, at the same time it was an easy one to make. I was beginning to gain confidence that my photos were good enough and I knew that if I didn’t at least give it a proper go, then I’d spend the rest of my life wondering ‘what if?’.

In the three years since then, I’ve been fortunate enough to work on projects in places such as Antarctica, the Himalayas and the Alps. Of all the places I’ve worked however, Scotland holds a unique appeal for me. A good adventure photo should make you, as the viewer, either want to be there, or want to be anywhere but there. During the winter months, the Scottish Highlands provide ample opportunities to capture either of these sentiments in an image. Although the mountains in the Highlands aren’t nearly as big as in other parts of the world, what they lack in size, they more than make up for in wildness and seriousness.

A GOOD ADVENTURE PHOTO SHOULD MAKE YOU, AS THE VIEWER, EITHER WANT TO BE THERE, OR WANT TO BE ANYWHERE BUT THERE. 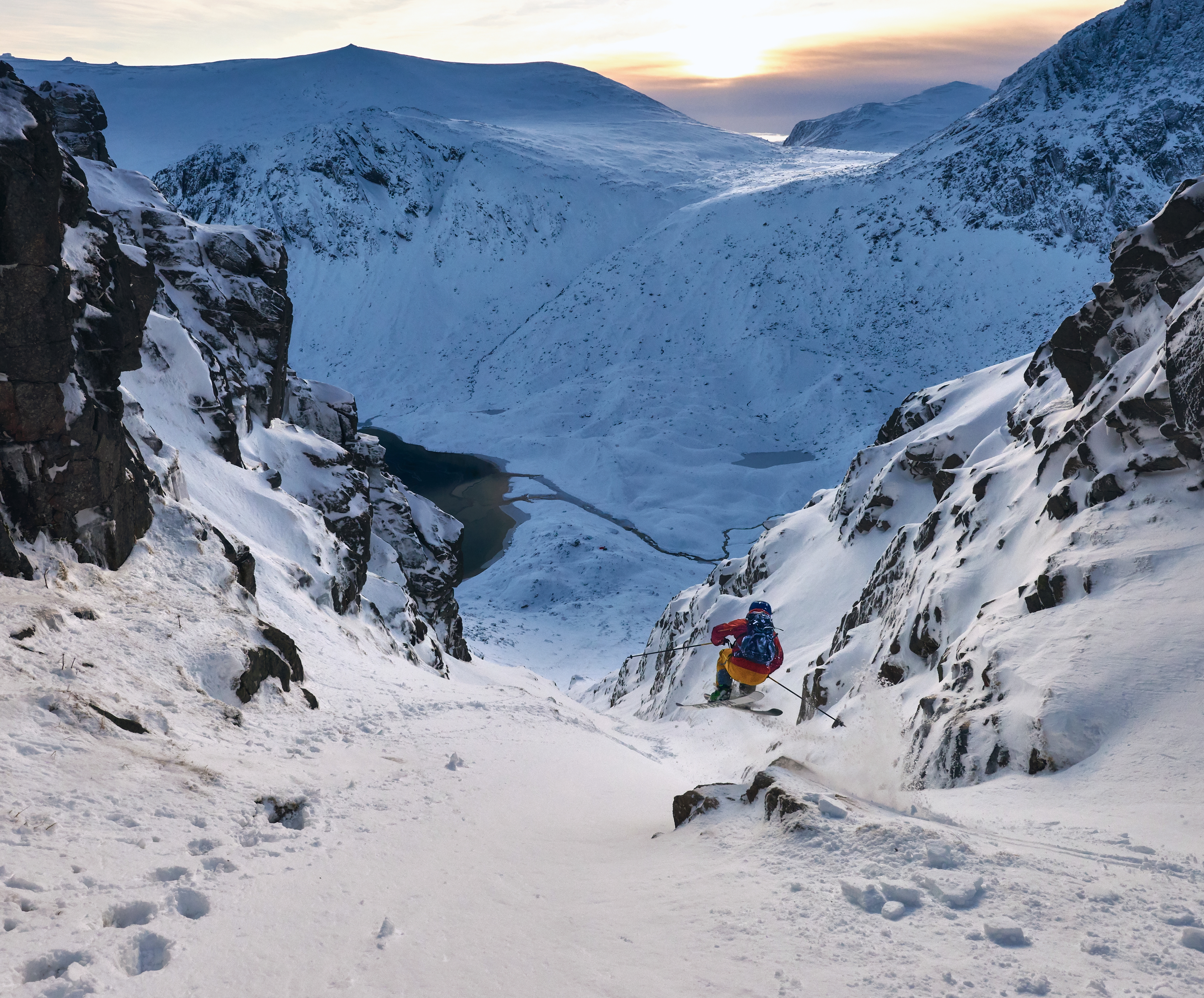 During winter you can go out for just a day, have the full mountain experience and be back home in time for tea. There’s a mentality of going out even when the weather’s bad, something which is generally to be avoided in bigger mountain ranges like the Alps and the Himalayas. You simply don your Goretex suit of armour, go out and get on with it. This can lead to climbing routes in sometimes horrendous conditions, with gusts of wind whipping snow up from below whilst spindrift pours down from above. It’s these sort of conditions that translate well on camera, adding a real sense of drama and discomfort to an image, both elements that people who spend time out in the mountains can resonate with.

The winters in Scotland can tend to be quite ephemeral, with temperatures normally hovering just above or just below freezing level. You spend much of the winter pouring over weather charts and forecasts, trying to build up a picture of how conditions are forming and trying to work out where they might be. It almost becomes a bit of a game. Do you go somewhere where you know there’s likely to be reliable conditions, or do you take a gamble and go somewhere unknown? Sometimes the gamble doesn’t come off and you might journey all the way to a remote cliff only to find it out of condition or ski all the way to a remote gully to find it completely wind-scoured and un-skiable. But the potential rewards of snatching a route or skiing a line that rarely comes into condition gives you enough encouragement to roll the dice. 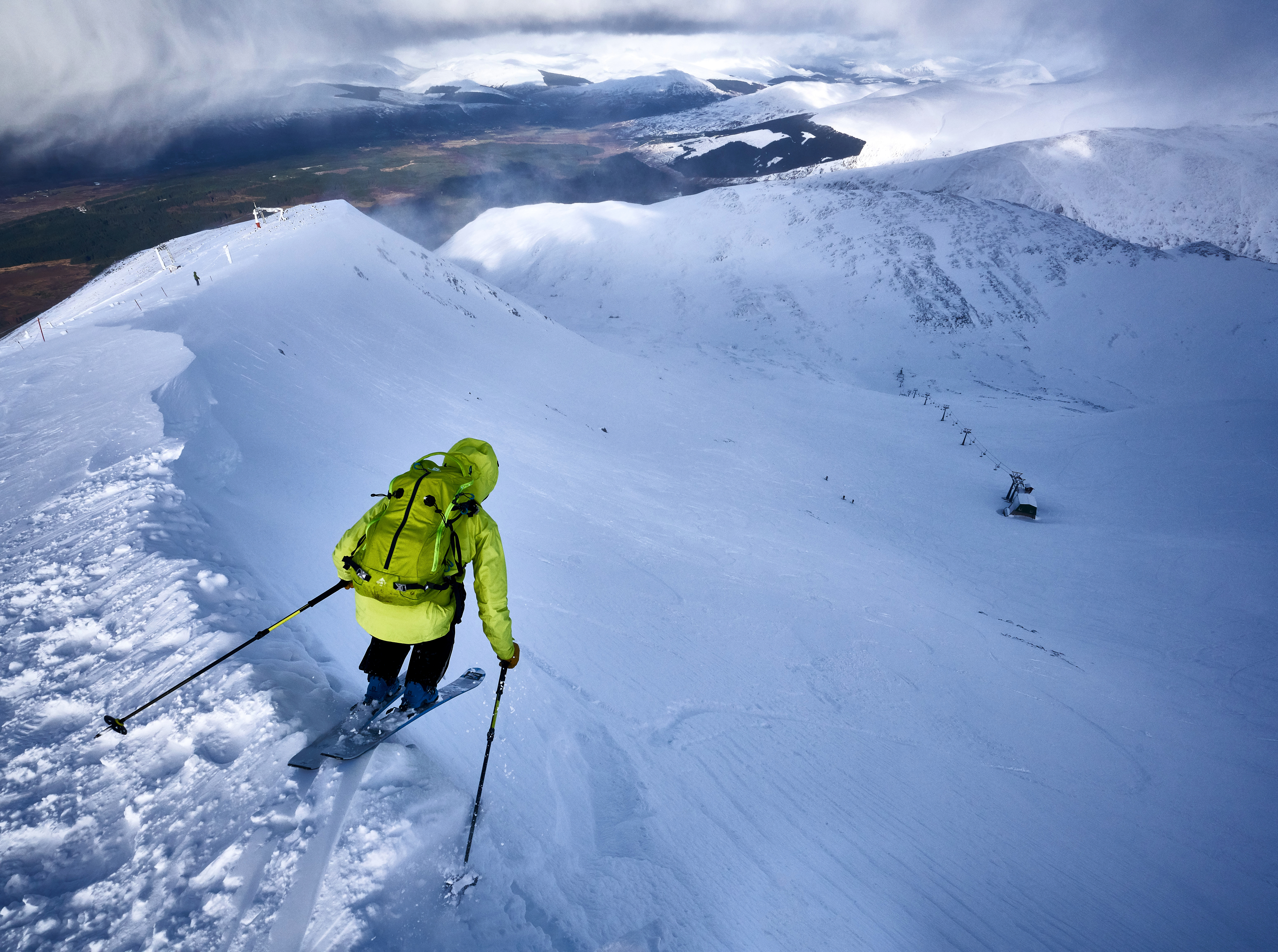 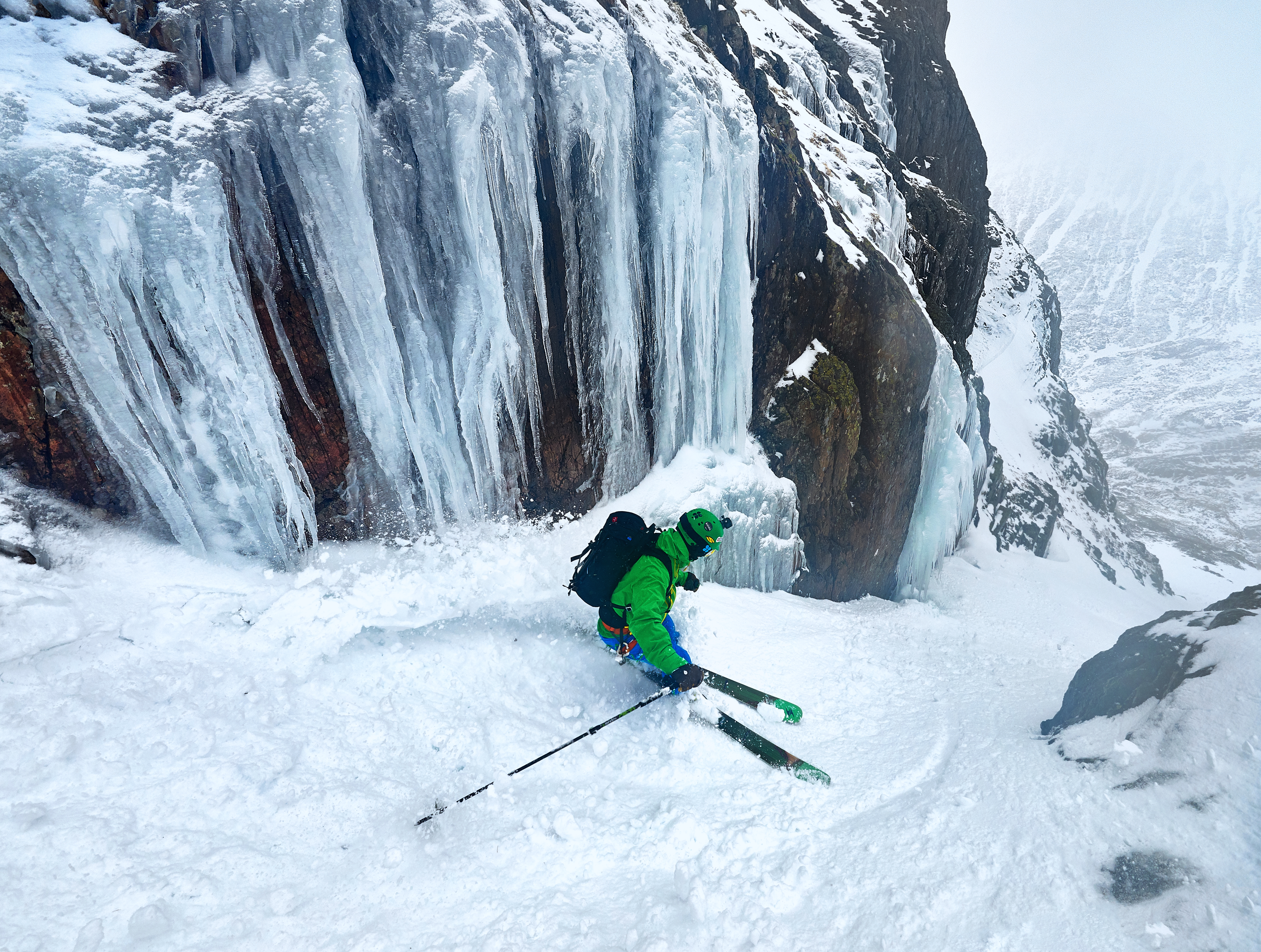 I hadn’t been photographing the sport long when I was given the opportunity to follow a team consisting of Greg Boswell, Guy Robertson and Adam Russell, who were attempting to climb a new route on Ben Nevis and wanted me to capture it on camera. As tough a day out as it is, it was one I was never going to pass up and soon enough I found myself rappelling down an iced up cliff face to get a shot of these experienced climbers attempting to make the climb.

As you lower over the edge, tethered to the mountain by a single 10mm diameter cord with hundreds of metres of exposure falling away below, you can’t help but feel vulnerable. It’s an intimidating and lonely place to be and it’s human nature to feel slightly scared. I find a degree of fear is healthy in these situations though. It stops me from getting complacent, makes me think everything through twice, checking and rechecking my systems and helps to keep me safe. Of course too much fear can be detrimental, causing panic and irrational decision-making, which can put you in danger. It’s an important emotion to be able to control in these situations.

As I rappelled further down the cliff, it wasn’t long before I heard voices in the distance below. Thinking it wouldn’t be long before they appeared, I scoped out a position on the route which I thought would make for a good shot and began waiting. 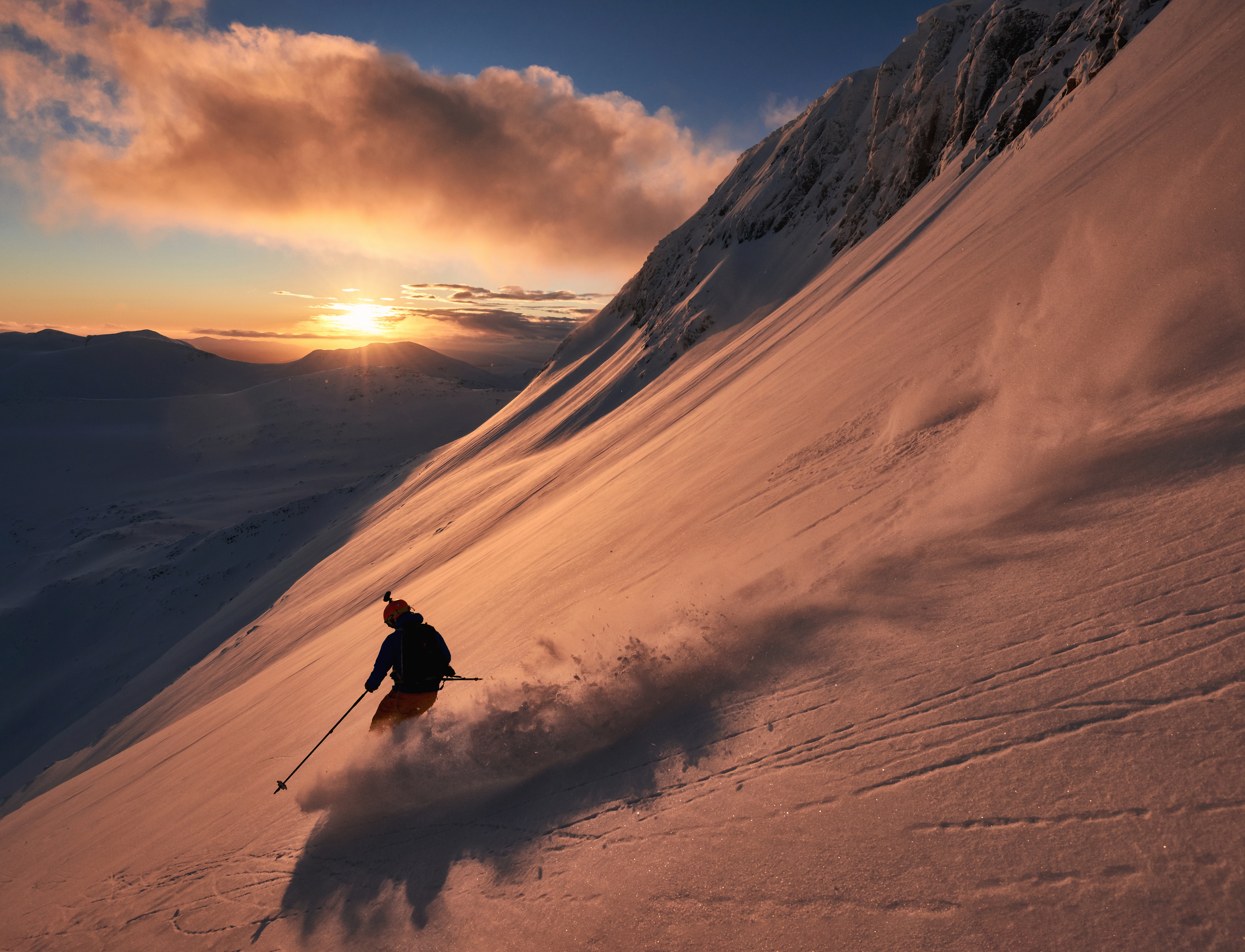 The temperature was well below zero that day and gusting winds blew regular plumes of spindrift down on me from above. I was conscious of how cold I was getting, so I forced myself to do short laps jumaring up and down the rope to keep my body temperature up. In spite of these efforts I slowly started feeling drowsy and began experiencing lucid daydreams – both early signs of acute hypothermia. As the hours passed, the voices didn’t seem to be getting any closer and gradually my sense of time seemed to disappear completely. It was only when I looked at my watch that I realised I’d been hanging there for almost six hours.

Fortunately, it wasn’t much longer before Greg appeared below, using his axes to layback up a rime-filled crack directly below me. The adrenaline of the situation jolted me awake again. I readied my camera, framing the shot with Greg in the foreground and the steep cliff falling away below and started firing off the shutter button, ultimately coming away with a set of images which did the route justice. The day had been successful, but I’d got away with some poor decisions and I knew it. Next time I’d have to learn from it.

I often get asked about my acceptable level of risk and to what lengths I’d go to for a photo. As a rational person who values his health, I’d never go taking stupid risks (no photo is worth risking your life for) however there’s no getting away from the fact that mountainous areas are inherently risky places. Just by spending time in them, you’re arguably taking unnecessary risks. I prefer to look at it the other way round and instead think about what I’m doing to control or reduce the risks when I’m out taking photos in the mountains. 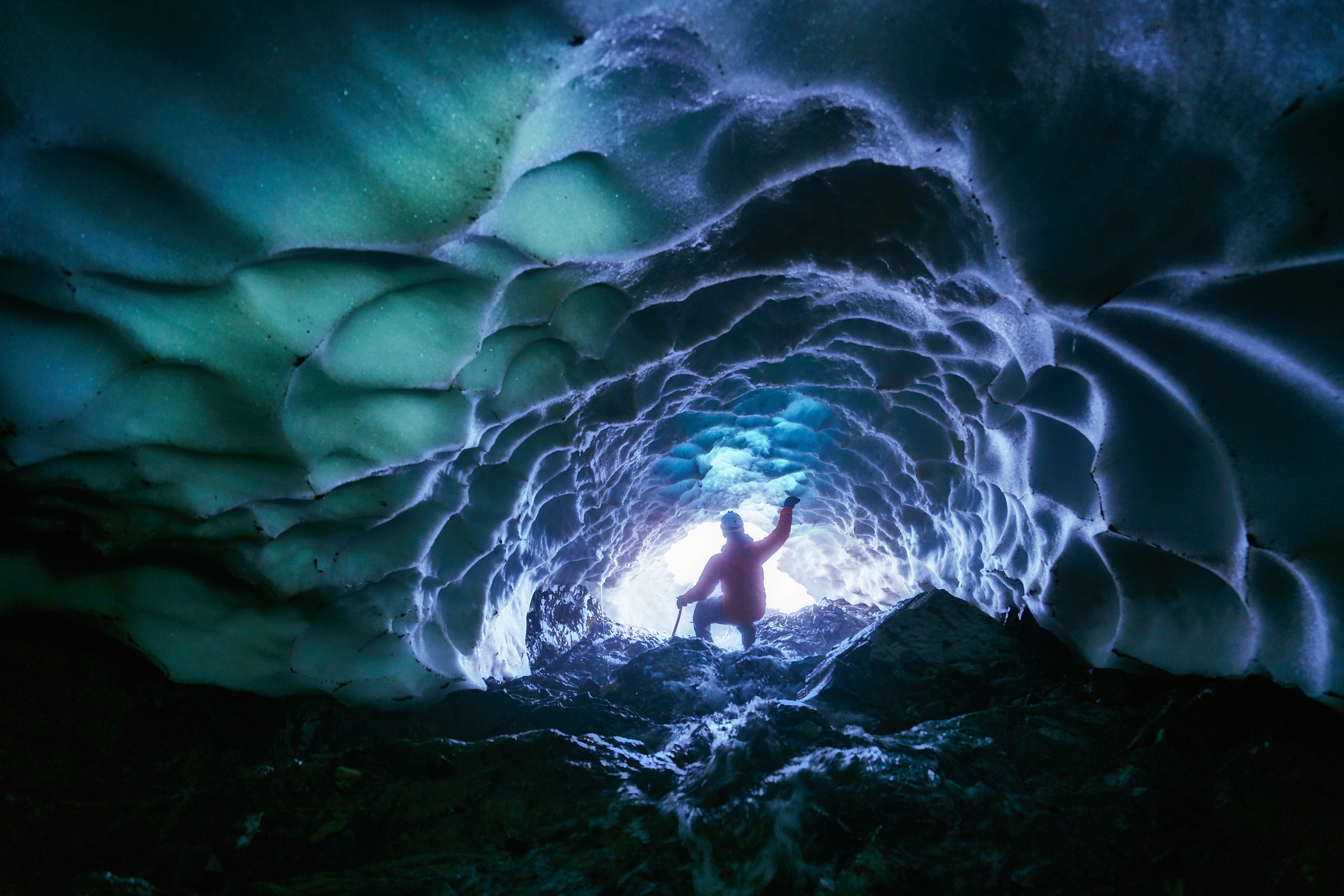 There’s obviously some crossover between these categories. By monitoring the snowpack and making sensible route choices, you can reduce your chances of being caught in an avalanche and by regularly checking forecasts you reduce your chances of being caught in an extreme weather event. The process of controlling these risks (both subjective and where possible objective) is something which begins in the planning of a day in the mountains and continues whilst out on the hill. Constructing a sensible plan (of route choice, timings, equipment, escape routes etc) based on all available information beforehand, making good decisions and being prepared to be flexible with that plan when conditions change will help to keep you in control. Making these decisions can be something of an imperfect science. You don’t always get them completely right, however making occasional mistakes and learning from them is an important part of improving your sense of judgement in the mountains, helping you to make better decisions in the future. 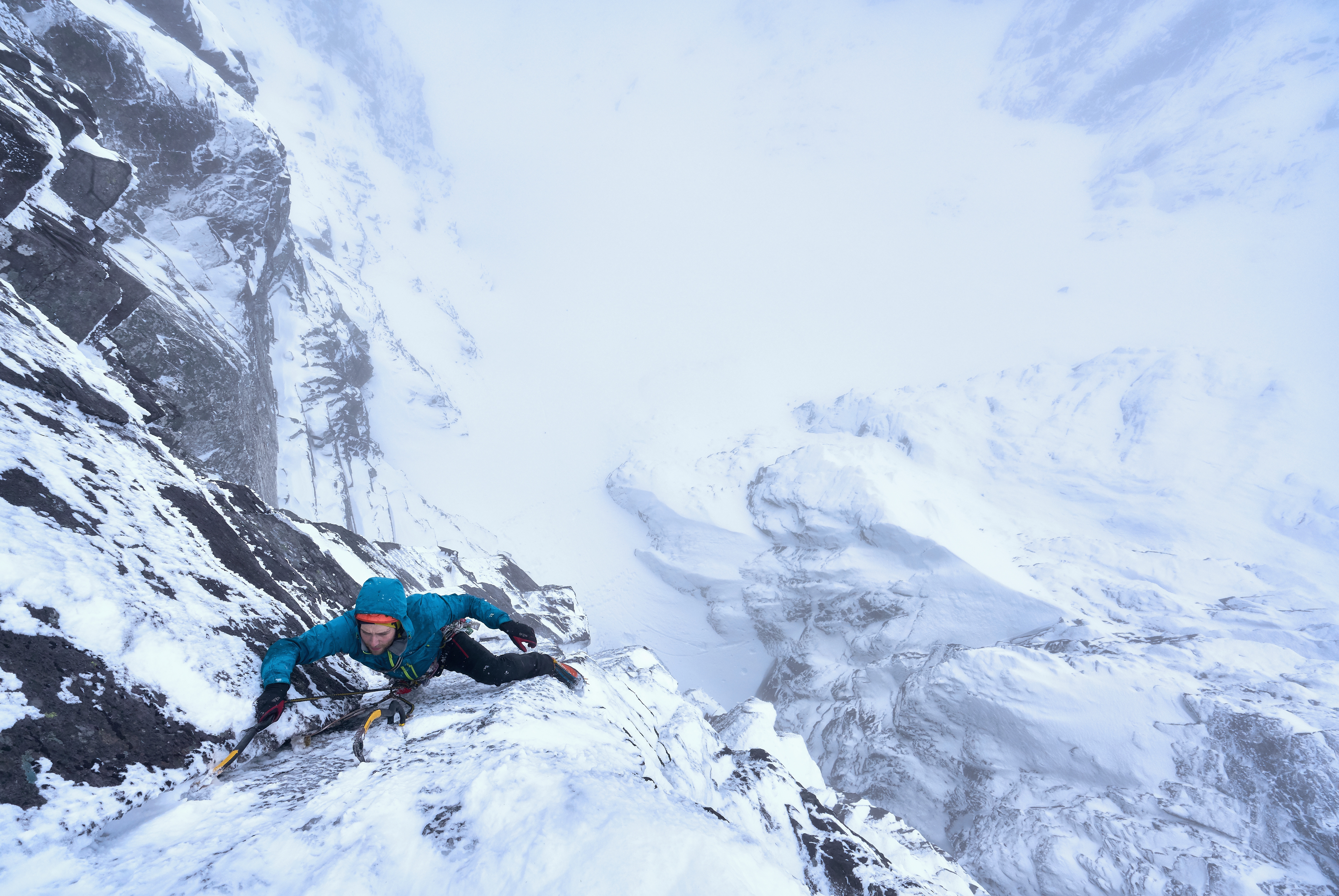 I find the process of trying to produce exciting images under these circumstances the most appealing part of my job. You’re trying to be creative whilst dealing with a whole host of challenges you wouldn’t usually get in other fields of photography. If it’s cold or wet, then you’re fighting the conditions, trying to look after yourself and keep your camera kit working. If the best angle for a shot is half way up a cliff face, then you’ve got to work through the logistics of getting to that position safely. To add to all that you need the fitness to haul lots of camera and climbing gear around and stay motivated to keep pushing that shutter button, even when you’re tired, scared and would probably rather be anywhere but there.

Despite all the challenges, there’s nothing more satisfying than the feeling of sitting down, completely worked at the end of a particularly hard day in the mountains, knowing you’ve come away with a great set of images the client is going to be excited about and that is why I do it. 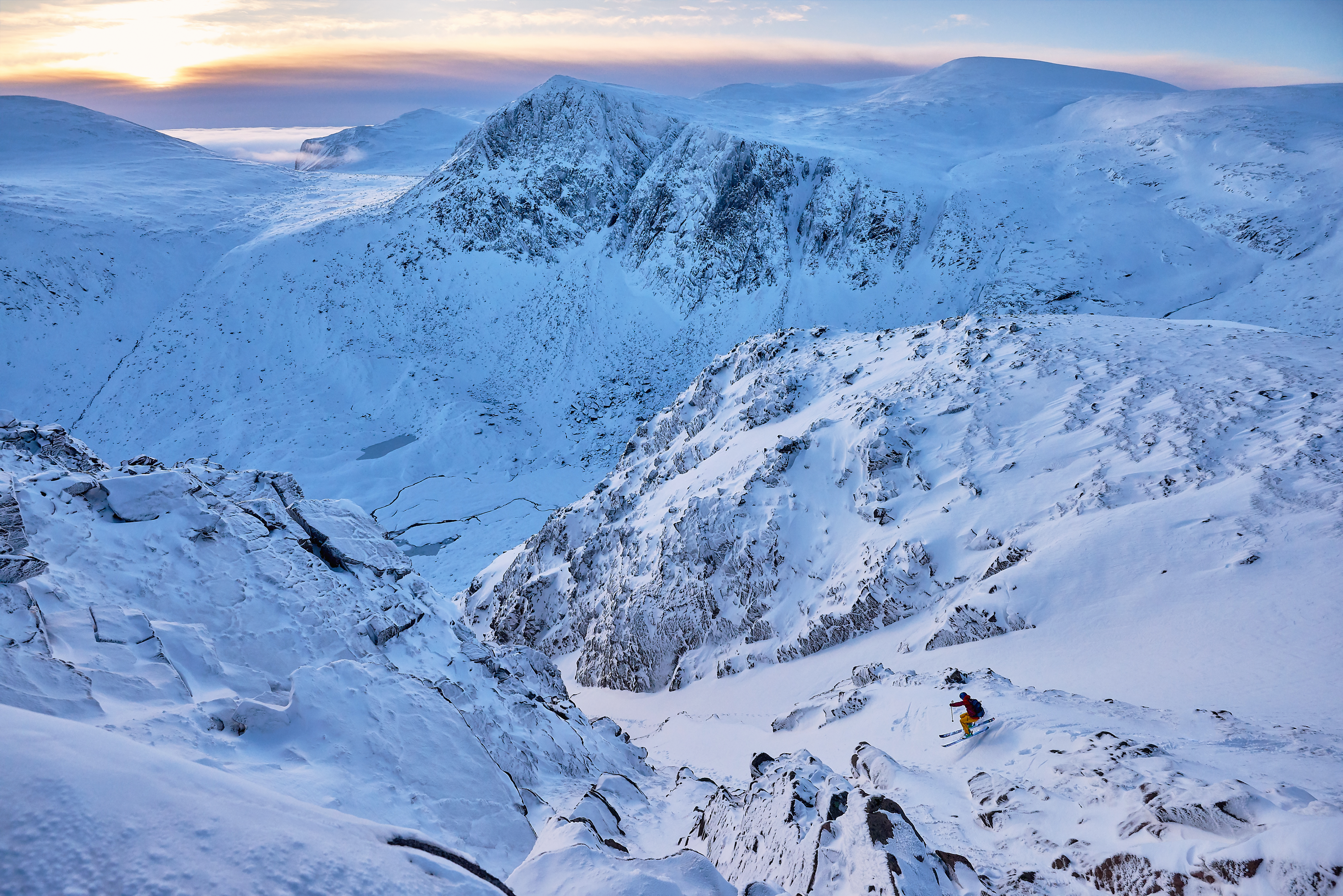 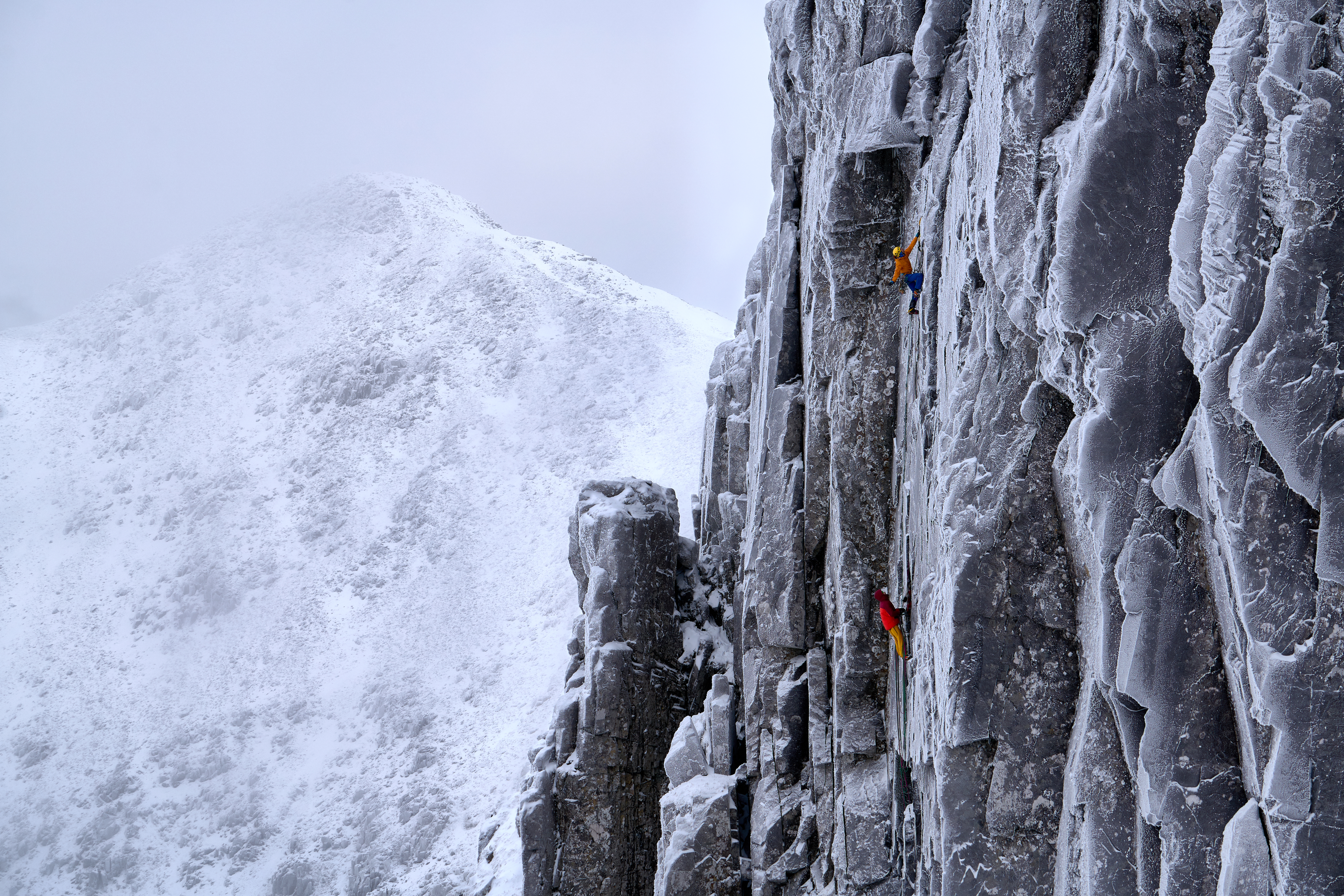 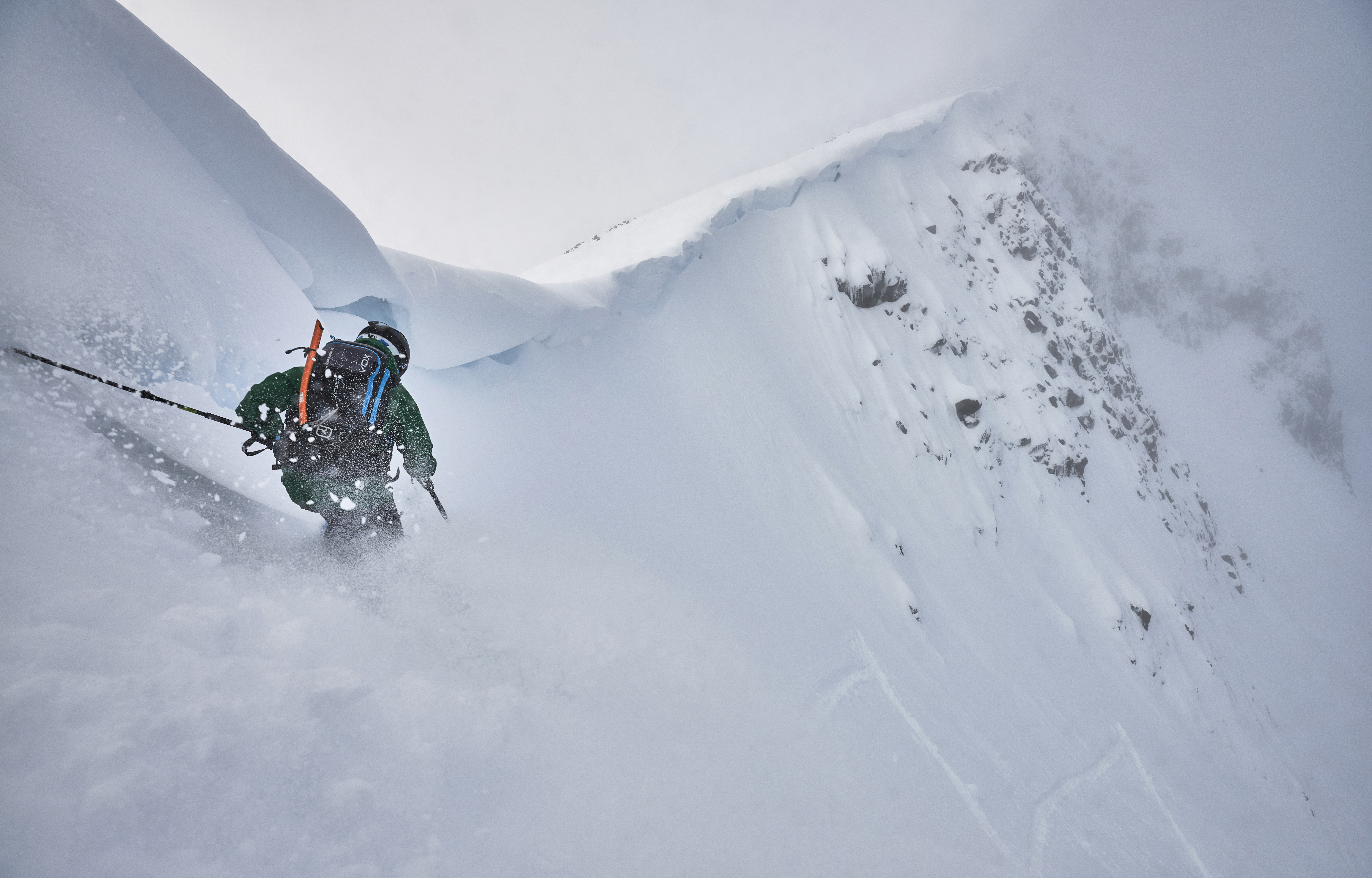 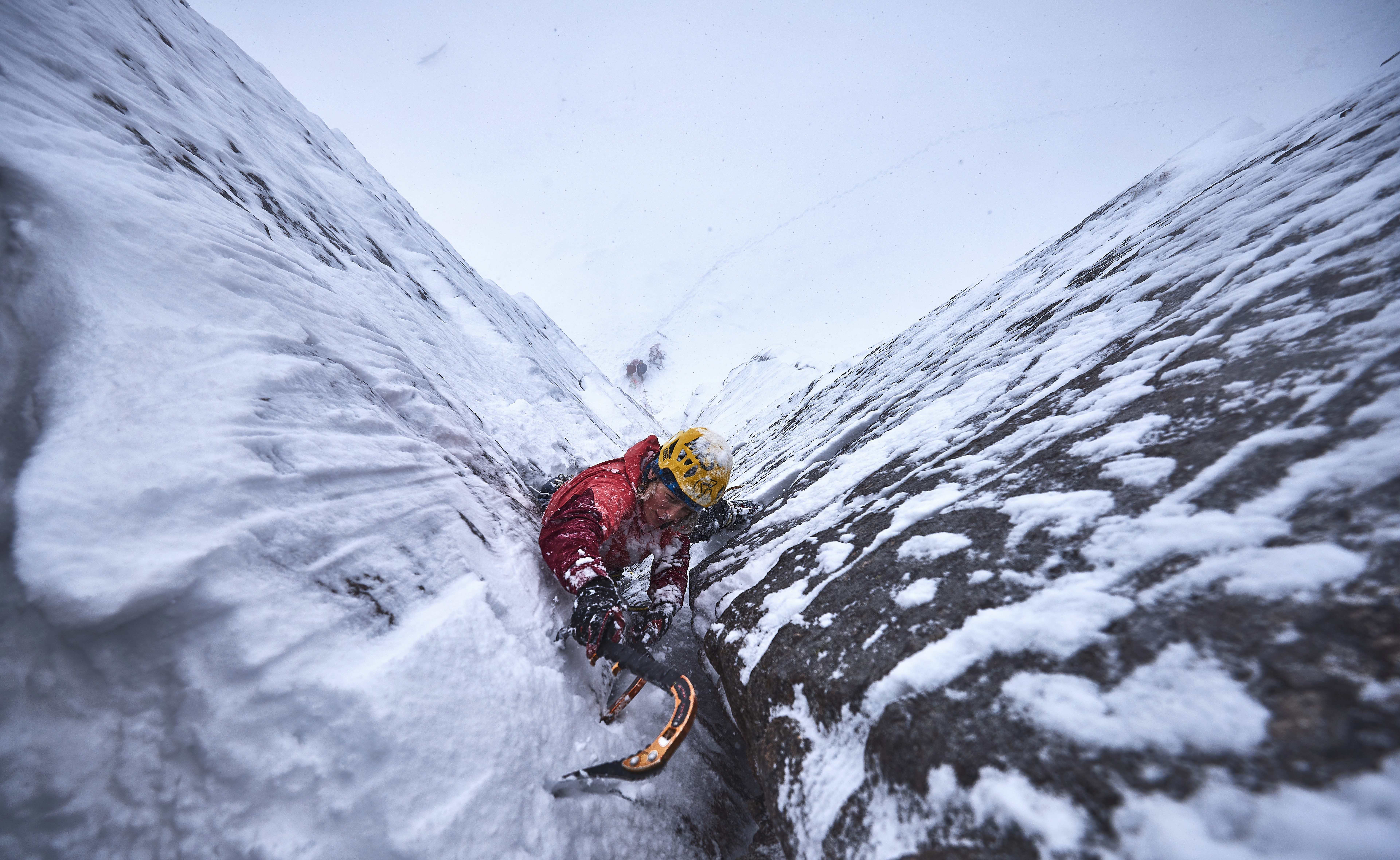 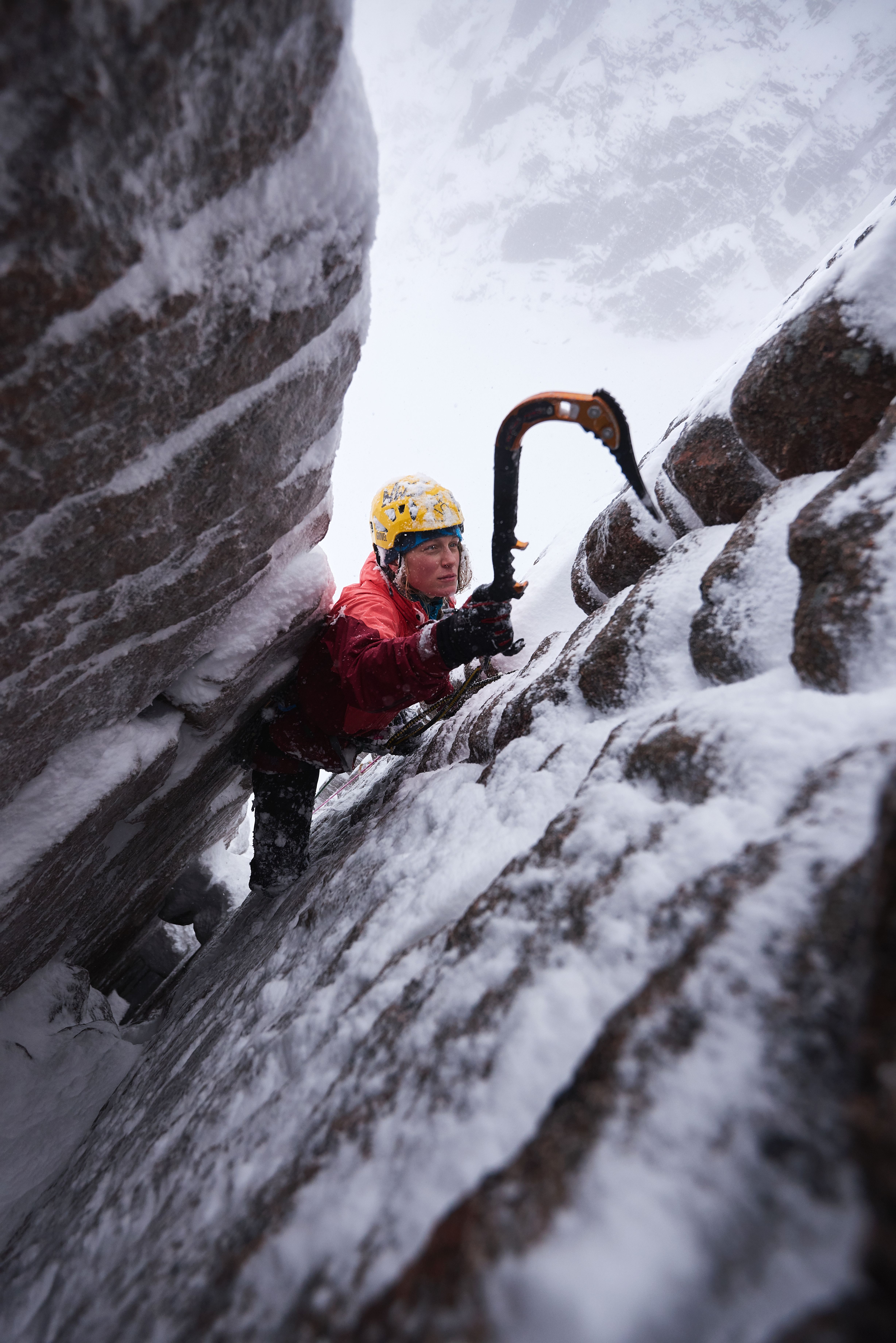 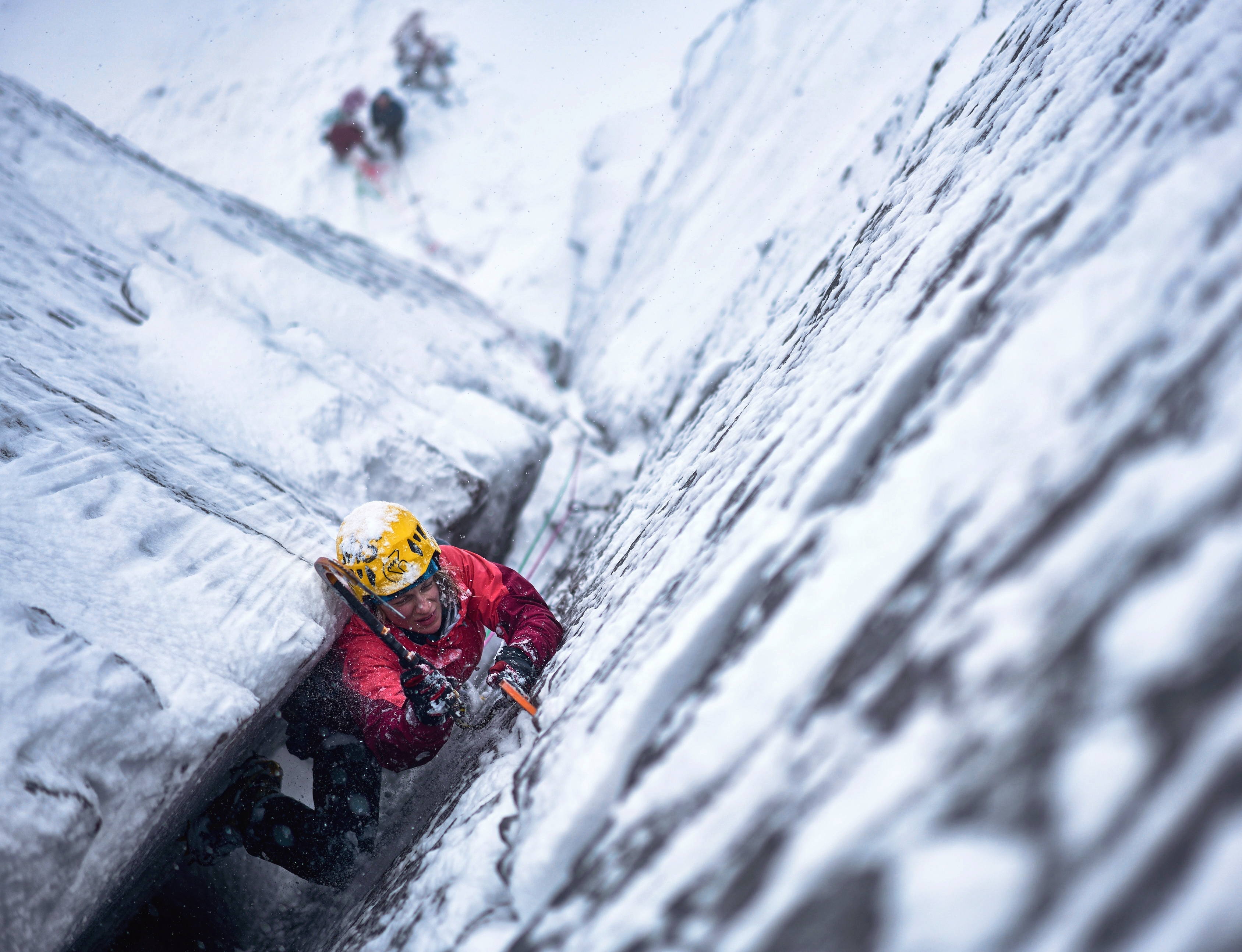 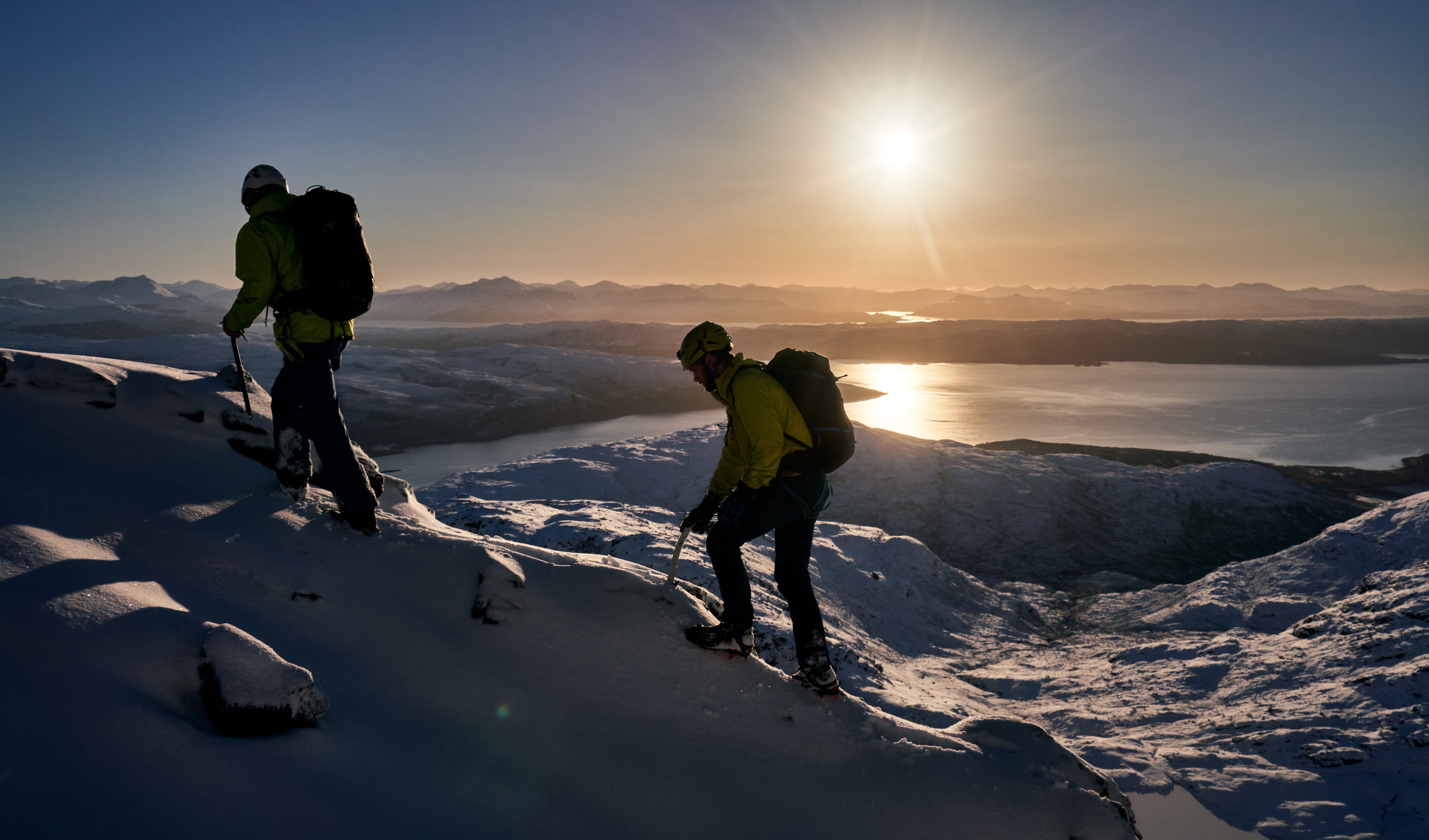 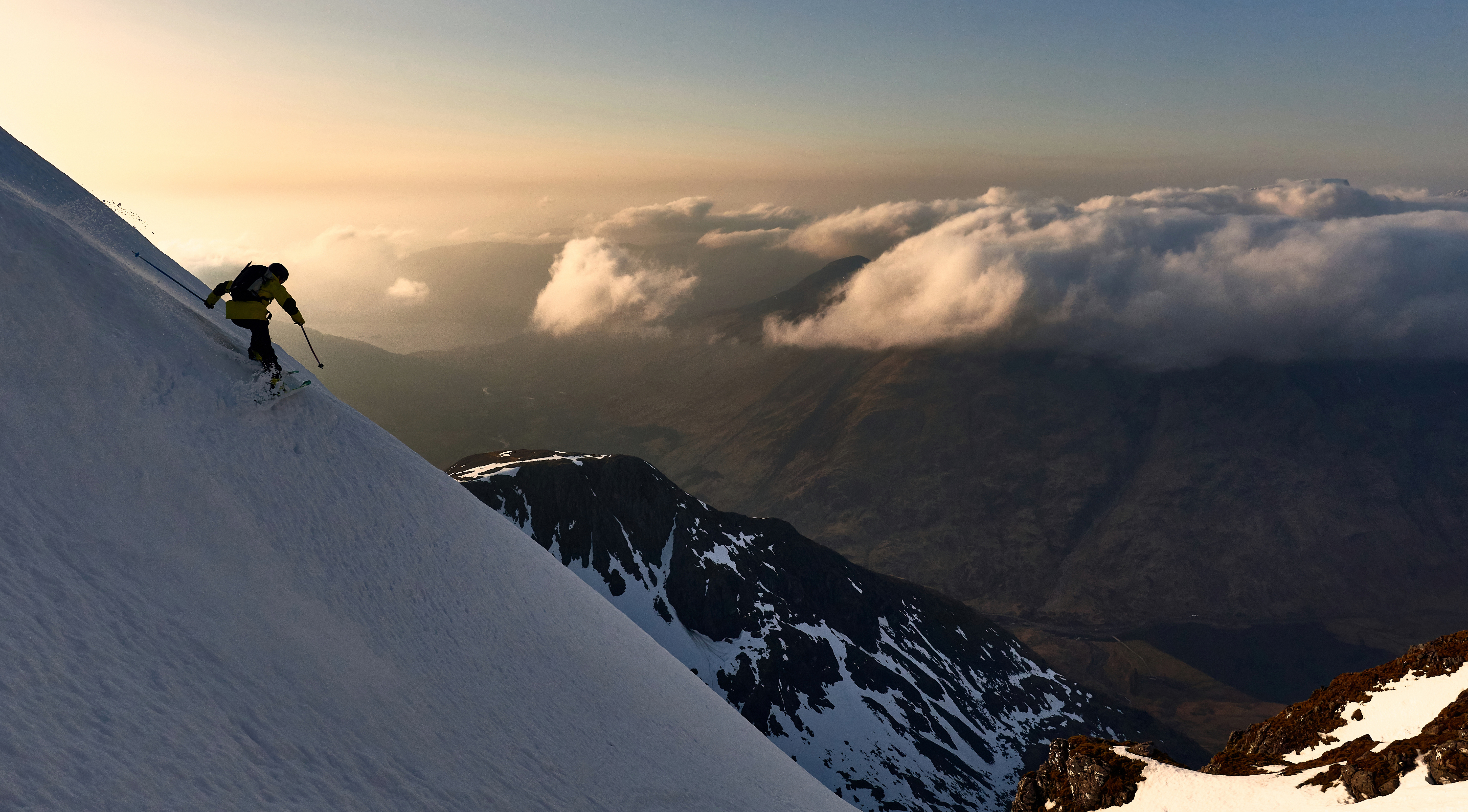 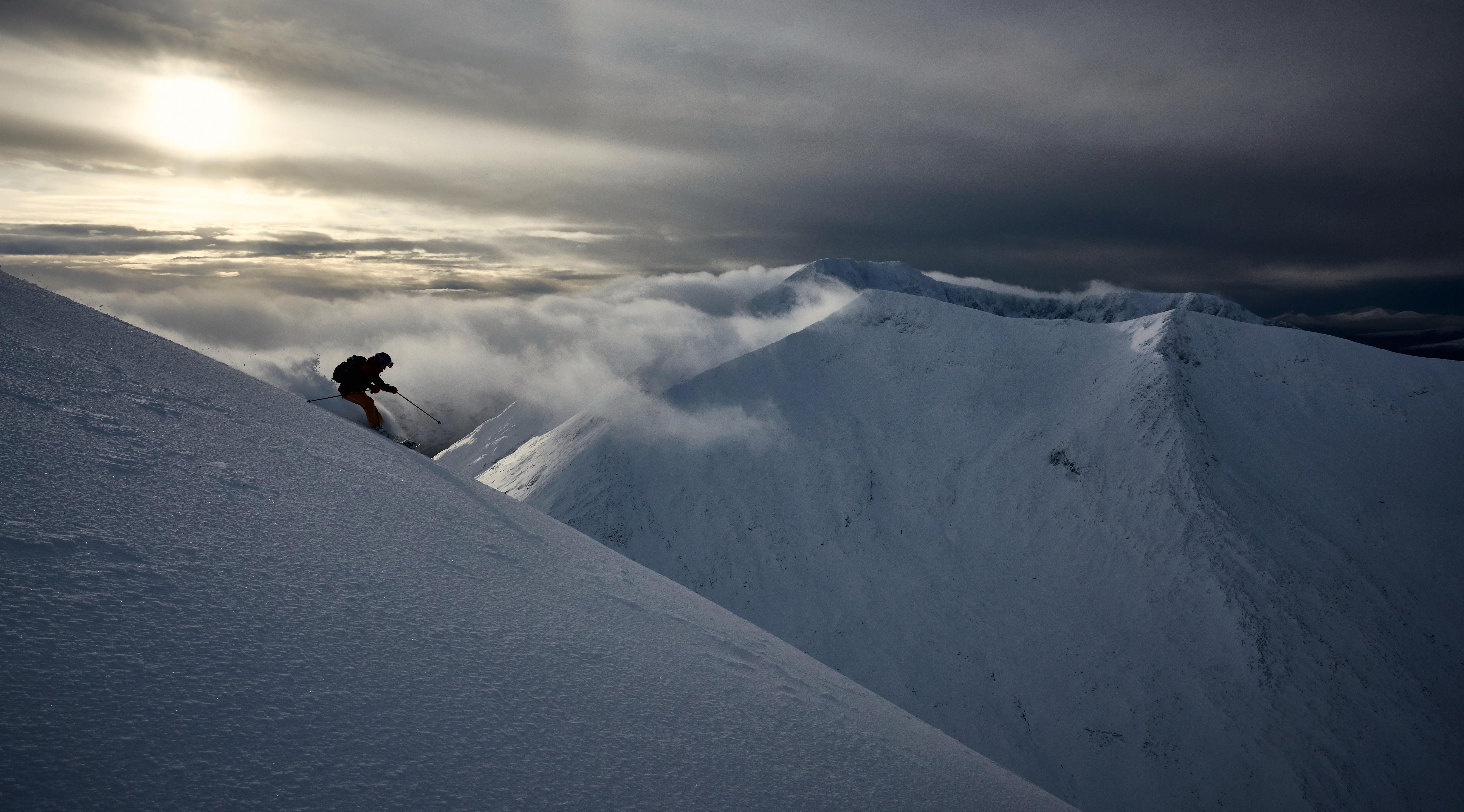