Potatoes are the world’s most popular vegetable – everybody likes them. They’re the fourth largest food crop (after rice, wheat and corn) and are a staple food for billions of people; including us here in Britain.
Each potato (the plant) produces lots of potatoes (the vegetables) and this, combined with the fact that they’re relatively simple to grow, has helped them spread around the world. Potatoes have an ever increasing fanbase, and are increasingly important in feeding the planet, so what better reason to take a closer look at the familiar brown vegetable? 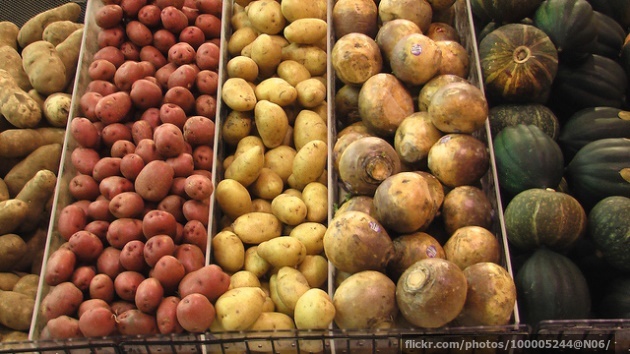 1) They’re not always brown, of course. Most potatoes have a brown skin and a white flesh (I’m sure you already know this) but there are some varieties with a red skin. One of these is the rooster, which has beaten off the competition to become Ireland’s most popular potato (and they have very high standards).

If you don’t like red potatoes (perhaps because they’re different to the brown ones you’re used to), you’ll probably like purple ones even less. The variety purple majesty, developed at Colorado University but now being grown in Scotland, has purple skin and purple flesh. These unusual spuds are full of antioxidants, but taste the same as a regular potato – meaning it’s possible to confuse your dinner guests with purple chips or a very weird-looking shepherd’s pie. 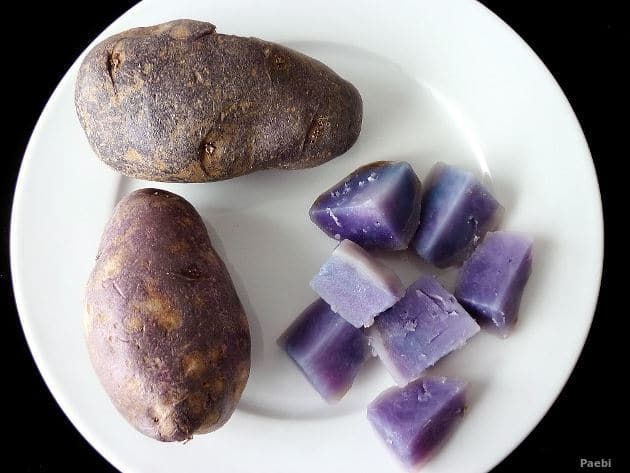 2) There are roughly 5,000 varieties of potato – 99% of which are descended from a single species. Potatoes originated in South America, in what is now Peru and Bolivia, and were first domesticated between 7,000 and 10,000 years ago (that’s domesticated as in “grown deliberately” rather than “brought into the family home as a pet”). 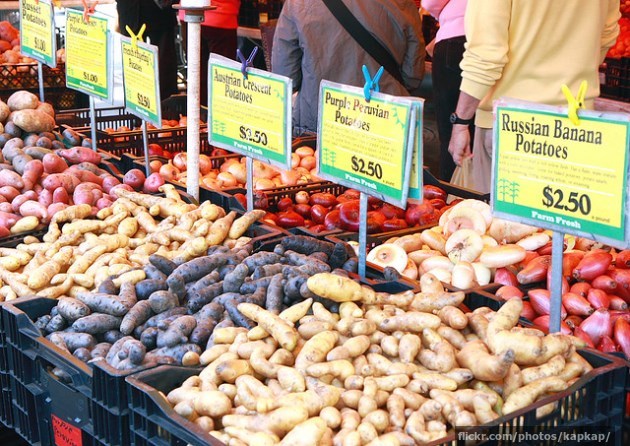 3) The average Earthling eats 33kg of potatoes per year, which doesn’t sound like very much. I probably eat one potato per day; some days I don’t have any, but other days I have more than one (what’s your average daily potato intake? Please do let us know). 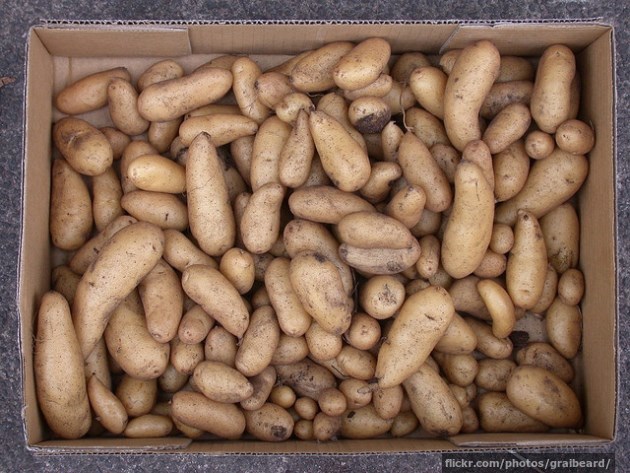 While 33kg may be the global average, some countries eat far more. It’s the greedy potato-munchers of Belarus who top the table, with each Belarusian getting through an estimated 180kg of the things per year. Second place goes to Kyrgyzstan, where the average citizen can stomach only 140kg. They may have missed out on first place by 40kg, but it’s fair to say that the people of Kyrgyzstan still really, really like potatoes.
4) 2008 was international year of the potato. The United Nations put on a number of events dedicated to the famous vegetable, ran potato-based art and photography competitions, and held an end-of-year celebration. 2008 was also the UN’s international year of sanitation, which presumably didn’t involve a photography competition. 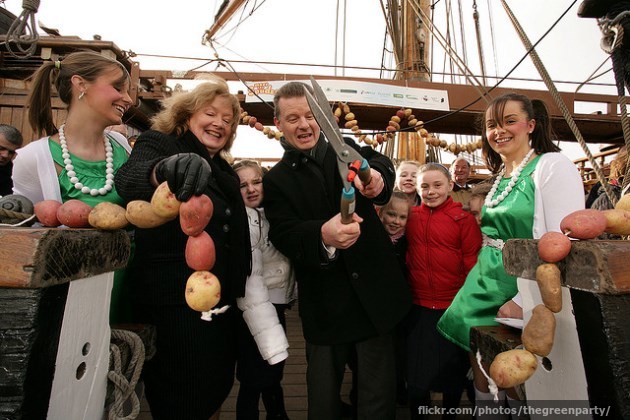 5) China is the world’s largest producer of potatoes, which makes sense – there are quite a lot of people in China, and quite a lot of room for them to grow things. In 2011 they produced 88 million tons, almost a quarter of the global total. 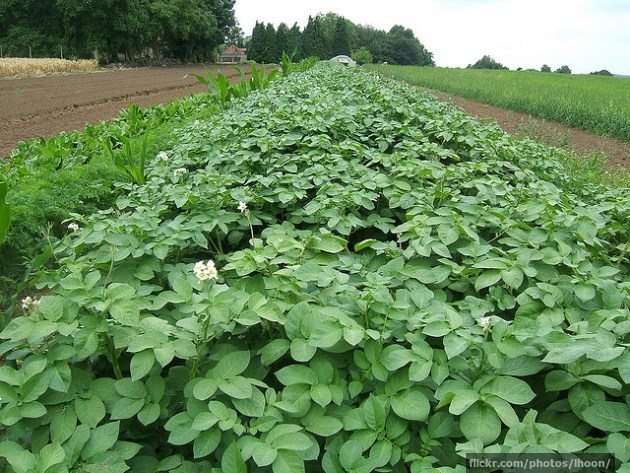 Potatoes are difficult to store, meaning that relatively few are traded internationally and most are eaten in the country where they’re grown – for this reason it’s probably not surprising that the second and third biggest producers are India and Russia. Despite its size, potato-obsessed Belarus is tenth. 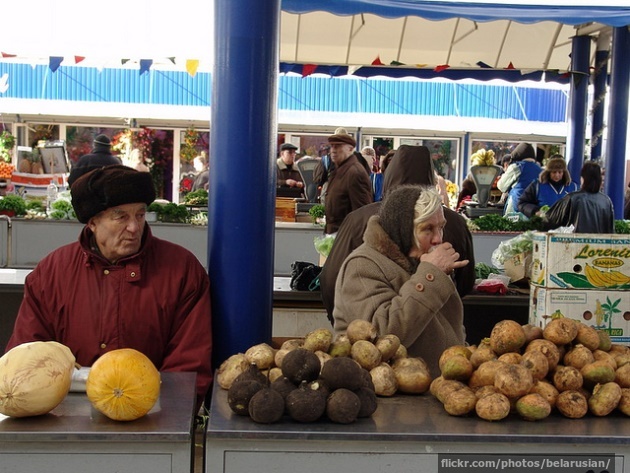 6) I say potato and you say potato. It’s a song lyric that doesn’t really work written down, but it makes a good point – there really are a lot of ways of saying potato. Even just in English there are a number of options – spud, tater, pot-pot – but most people stick with plain old “potato”. The word comes from the Spanish “patata” and, seeing as it was the Spanish who introduced potatoes to Europe, that seems fair enough.

Around Europe, countries have been coming up with their own names for potatoes, with seemingly no regard for the original Spanish word. In the Czech Republic, they call potatoes “brambory” (which sounds nice) while in Germany they’re known as “Kartoffeln” (which doesn’t). Other countries seem inexplicably confused between a potato and an apple – the French word for potato is “pomme de terre” (earth apple) and the Dutch call them “aardappel”.
7) Potatoes can be consumed in a variety of ways. I like almost all of them; fried, baked, roasted – not mashed though (it’s too potatoey). Around the world, potatoes are eaten in a wide range of different forms – they’re often added to soups or stews, and it’s possible to make potato bread. 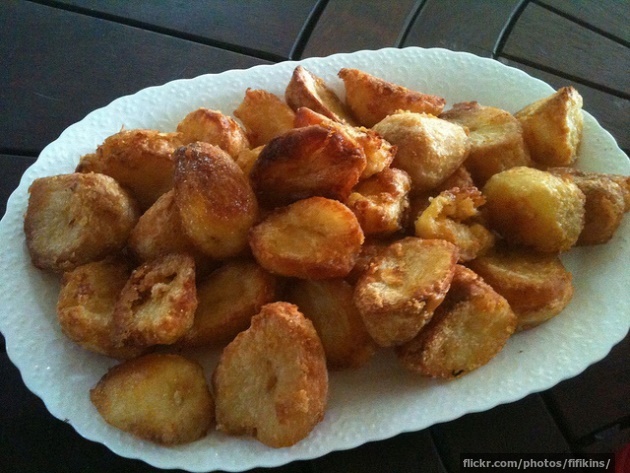 If you’re sick of eating your potatoes, why not try drinking them? Potatoes can be easily fermented and used to produce vodka or poitín, an Irish drink that can contain up to 90% alcohol. 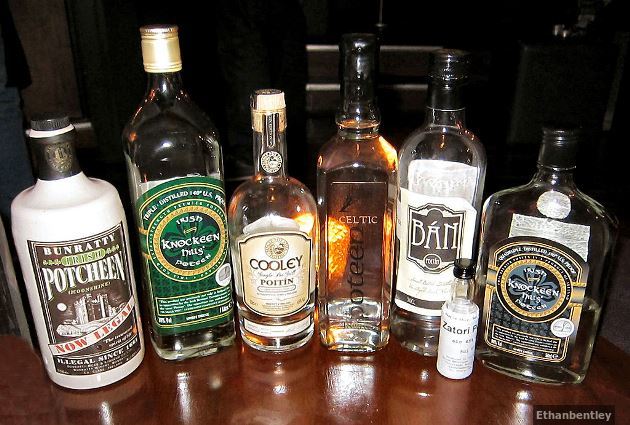 8) The world’s biggest potato was grown in Northampton. The massive, misshapen spud weighed 3.76kg; far too big to cook properly (although it’d probably be scoffed whole by a potato-mad Belarusian). That’s not the only fascinating potato record…
The world’s largest potato chip measured 25″ by 14″ and was produced in Ohio. Unfortunately, as this was in America, it was actually a crisp and should therefore be excluded from any big chip competitions. Not only that, but it was made by the Pringles company and so wouldn’t even have been a proper crisp. Basically, everything about this record is nonsense – I don’t know why I mentioned it. 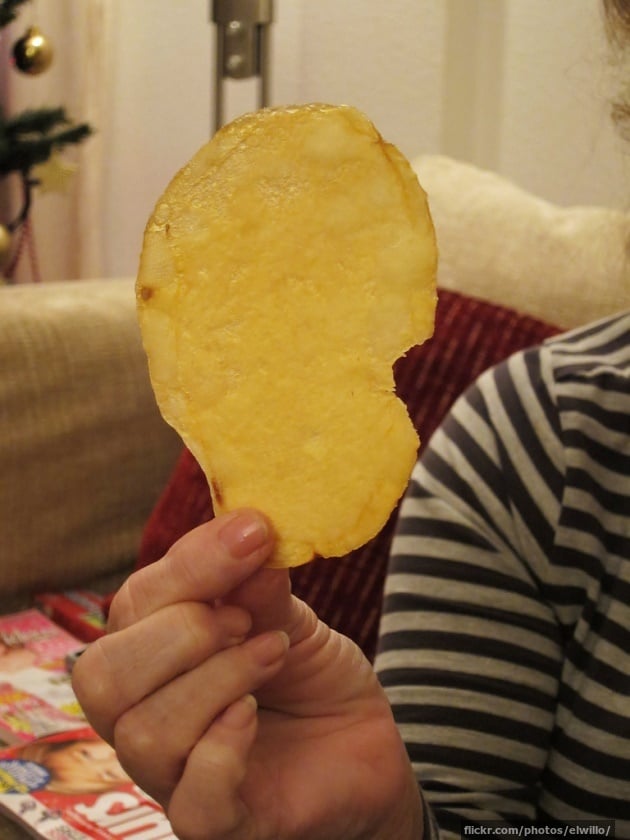 The largest ever bag of crisps was made in Bradford in 2004. It weighed 52kg. I haven’t been able to discover what flavour the crisps were, but hopefully it wasn’t prawn cocktail or the whole thing would’ve been a waste of time. 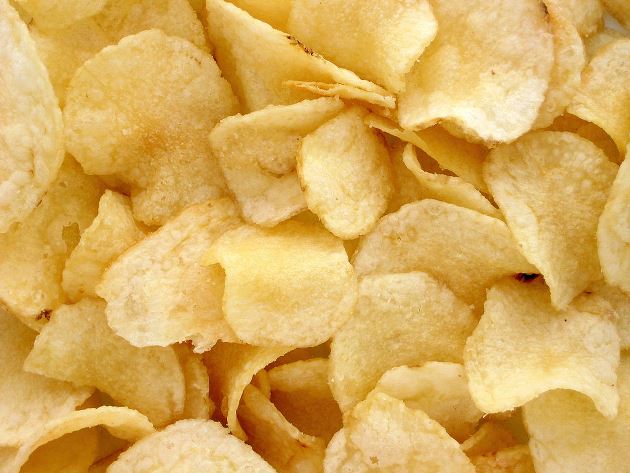 The world record for the longest chip is held by a curly fry from New York. Uncurled, the chip measures an incredible 34″. This is the best of the potato world records because, rather than being a wasteful publicity stunt for a large multinational, the curly fry was made by accident and a lucky man called John simply found it in his dinner.
If you feel like you want to learn more about potatoes, why not visit the Frietmuseum in Belgium? Although the museum is mostly about Belgian potato fries, there’s also a lot of information about potatoes themselves and a collection of different potato peelers. You can call in advance to make a reservation for your visit, or just turn up and hope it’s not too busy.