Home » Blog » 6 incredible natural features from around the world

Pretty temples, weird statues and funky bridges are all well and good but in my opinion, some of the best sights you’ll ever see are natural. Everyone knows about the usual suspects – your Grand Canyons and your Mount Everests – but what about the natural features that are just as incredible, but not as well-known? Well, here are six such natural features… 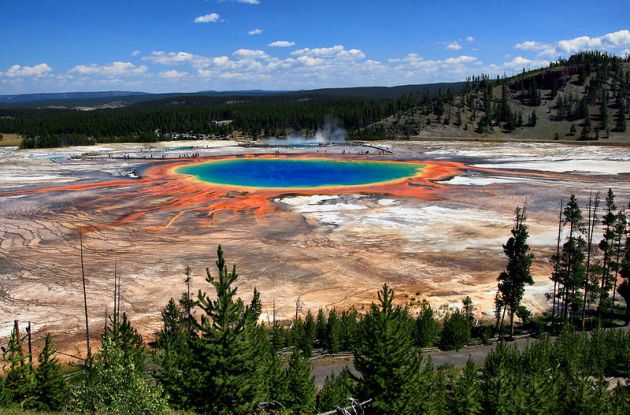 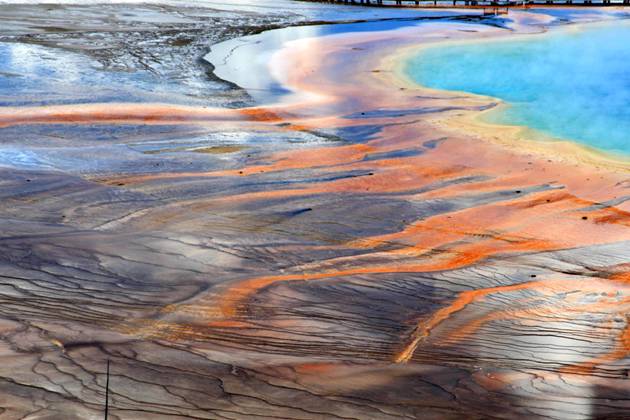 Found within the Midway Geyser Basin, the Grand Prismatic Spring is the biggest hot spring in the US and the third biggest in the world, with a diameter of 300 feet and depth of 160 feet. The Grand Prismatic Spring discharges an amazing 466 gallons of water a minute, which is heated by geothermal activity below to a very hot 70°C! So I wouldn’t recommend you go for a paddle in it… 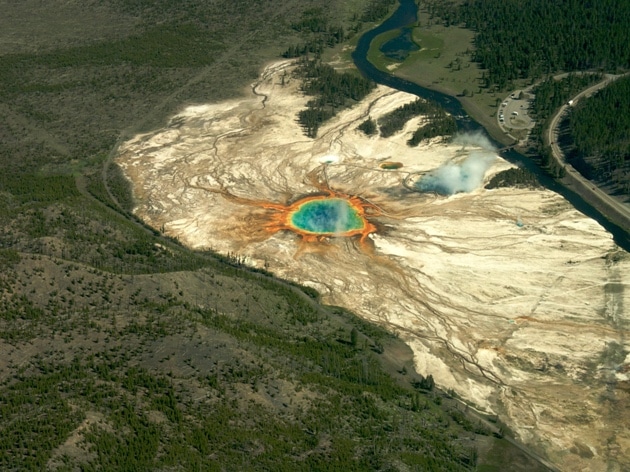 Here’s a video showing steam rising from the spring and swirling around in the wind. It’s very therapeutic to stare at but at 10 minutes long, it does gets a bit samey after a while…
https://www.youtube.com/watch?v=GsowRzLf8WU 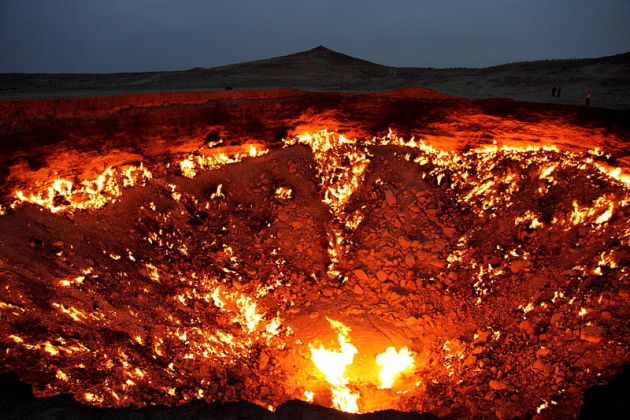 If you ever happen to be knocking around nearby the Turkmen village of Derweze, and you pay a visit to this natural feature, I don’t think anyone would blame you for thinking you were peering in the depths of the underworld. Not only does it look like the fiery abyss, it’s also named as if it was too – it’s called the Door to Hell!

The Door to Hell is a giant 230-foot cavern in the middle of the Karakum desert that has been burning continuously for decades. Far from being an actual portal into the underworld, the Door to Hell was created when the ground beneath a drilling rig collapsed in 1971. 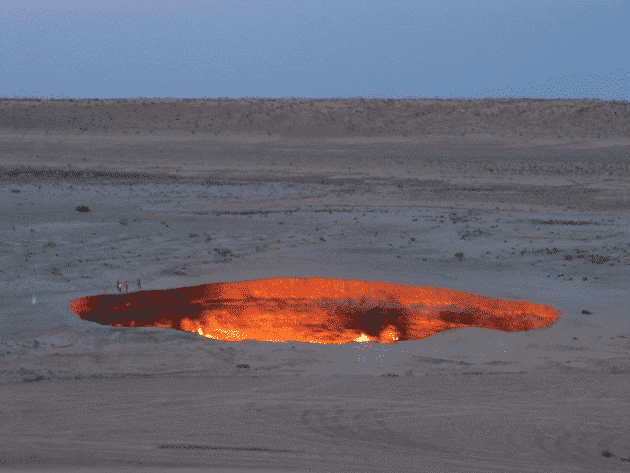 To prevent any poisonous gas from escaping, the geologists decided to burn it off, hoping the fire would only last a few days. But little did they know, the fire would still be burning over 40 years later.
The constantly burning hole creates an ominous golden glow at night, which can be seen for miles around. Apparently, visitors to the hole can only spend an average of five minutes there because of the noxious methane gas the flames produce.
Here’s some shaky footage of the Door to Hell to give you nightmares: 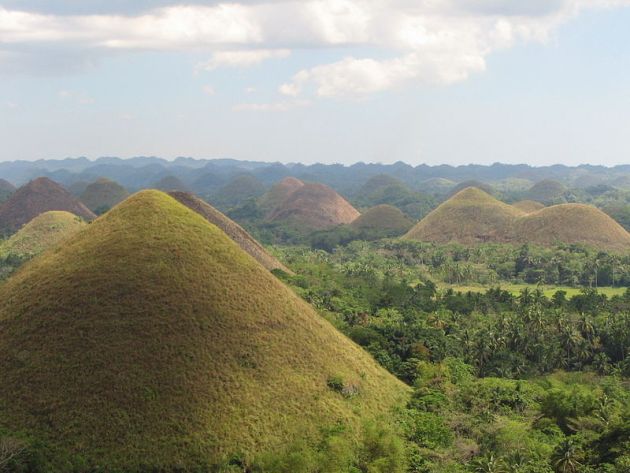 Who doesn’t like chocolate? You? Really!? Well, to each his own, I guess… But you’re missing out, you know! You should probably skip this next natural feature; you won’t like it. The rest of you, however, will love it. These are the Chocolate Hills, which can be seen in Bohol Province, Philippines… 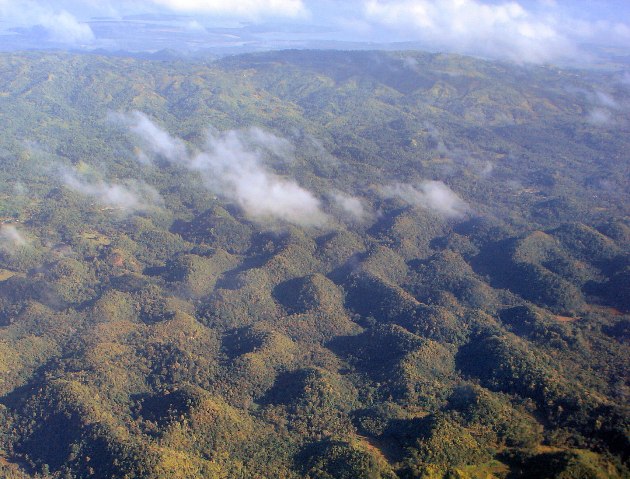 They’re called the Chocolate Hills because, in the dry season, the green grass that grows on the hills turns brown, making them resemble gigantic mounds of cocoa powder. However, most of the photos I’ve been able to find make it look like they should be called the Matcha Green Tea Hills… 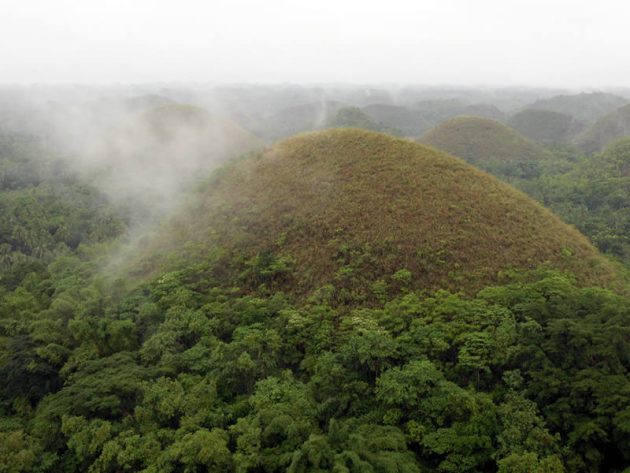 The hills, which are mostly conical or dome-shaped, are made from grass-covered limestone and are spread over an area of more than 20 square miles, comprising of between 1,260 and 1,776 hills! The largest of the Chocolate Hills is 390 feet high, but most of the rest of the hills range from between 98 to 160 feet. 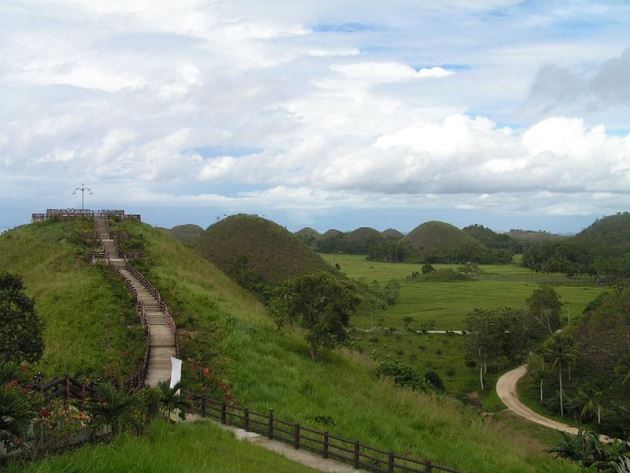 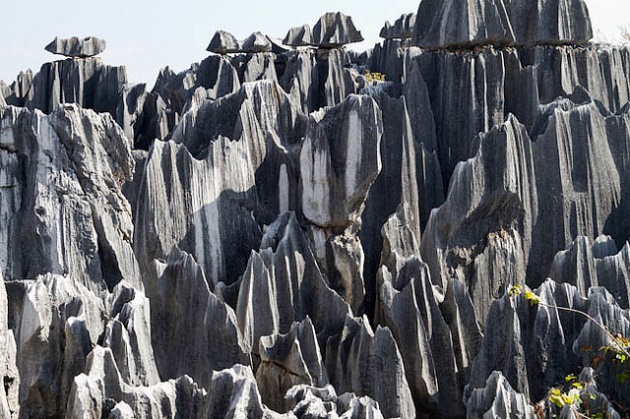 If you go down to the Stone Forest today, you’re sure of a big surprise… Well, not really – the name is pretty self-explanatory. The Stone Forest, which is also known as Shilin, is actually a set of limestone formations which resemble tall, rocky trees. 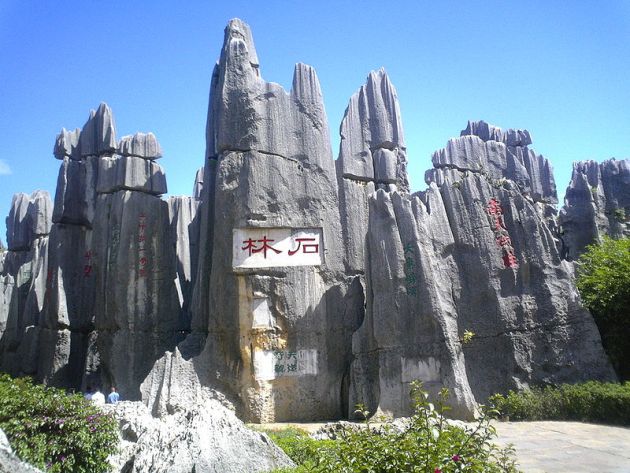 The Stone Forest covers an area of 96,000 acres and is about 75 miles away from the city of Kunming, in Yunnan Province. The “trees” are known as karst formations (like the rocks at Ciudad Encantada in Spain), which means they they’ve been formed by – bear with me here – the “dissolution of a layer or layers of soluble bedrock.”. It’s believe that the formations are over 270 million years old. 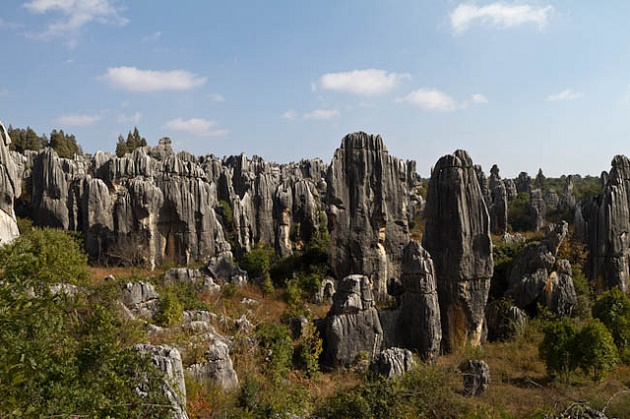 As is customary, the Stone Forest comes with an obligatory legend to explain their existence. It’s said that the forest was the birthplace of Ashima, who was a beautiful girl of the Yi people. She fell in love but was forbidden to marry her chosen suitor and so she turned to stone (as you do).

Great Blue Hole | Off the coast of Belize 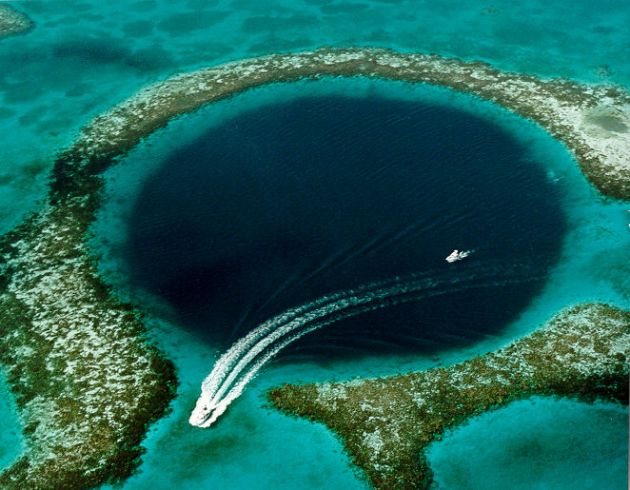 This natural feature is much like the first two in our list in that it’s a hole. Who knew holes would be so amazing! The Great Blue Hole – which I’m sure you’ll agree is very imaginatively named – is, well, a big blue hole in the middle of the ocean, just off the coast of Belize.
Here’s a satellite photo of the Lighthouse Reef, with the Great Blue Hole visible (if you get right up close to your screen) near the centre: 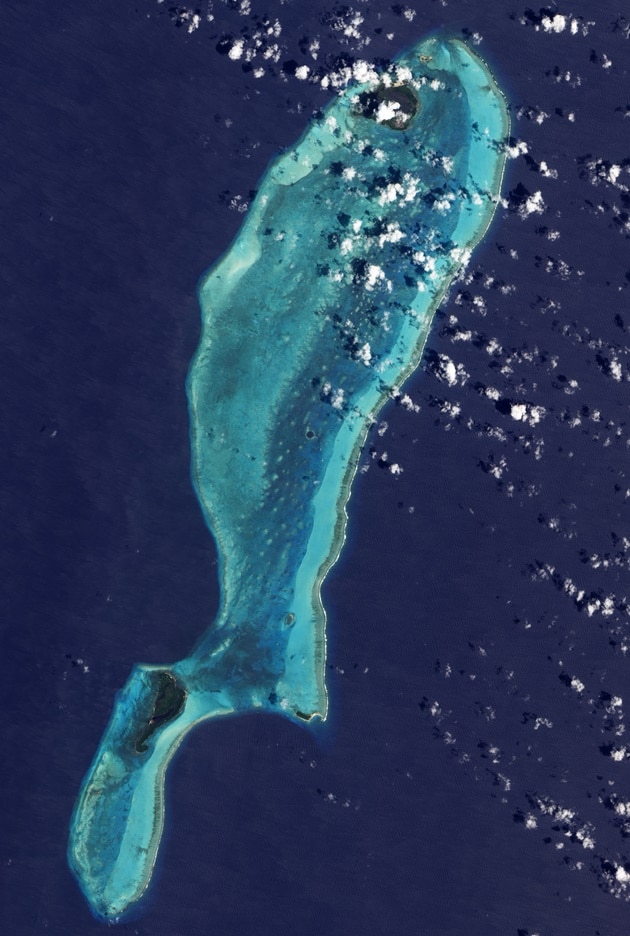 As far as great holes go, the Great Blue Hole is pretty great – it’s over 980 feet wide and is almost completely circular. The hole is technically a submarine sinkhole which was formed during “several episodes of quaternary glaciation when sea levels were much lower.” I don’t know what that means but look at the pretty hole it’s made! 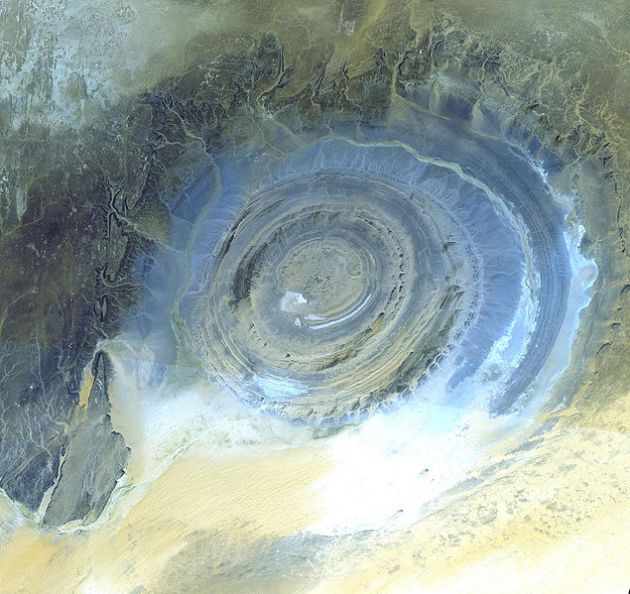 I’ve been reading about this last one for a while now and I’m still not really sure what it is. So for now, I’m just going to describe it as pretty, swirly thing. (Don’t worry – by the time you reach the next paragraph, I’ll understand everything there is to know about the Richat Structure…) 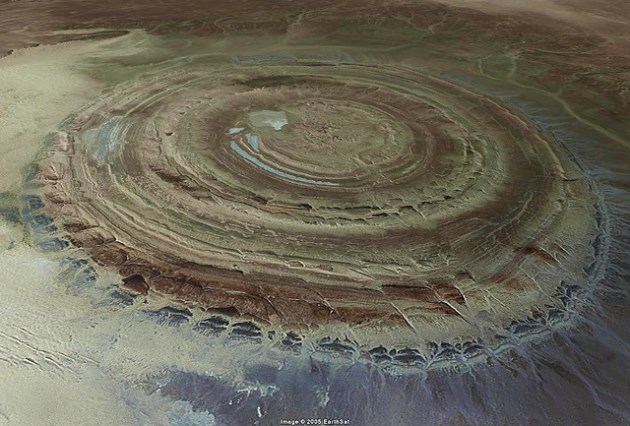 The Richat Structure can be found in the Sahara desert in Mauritania, near the town of Ouadane (what did I tell you?) Also answering to the names the Eye of the Sahara and Guelb er Richat, the structure is over 24 miles in diameter and can be seen from space. 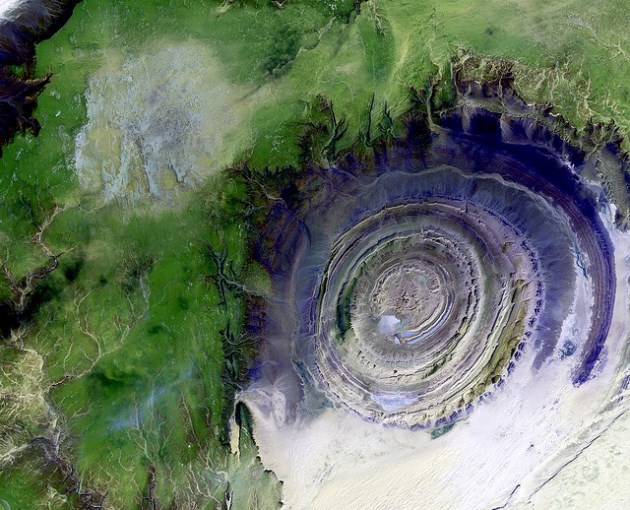 Apparently, even the scientists don’t really know what the Richat Structure is so I’m feeling a lot better about myself. The original theory was that it was the result of a meteorite impact, however this has been dismissed by many as it doesn’t explain why the centre of the structure is flat. 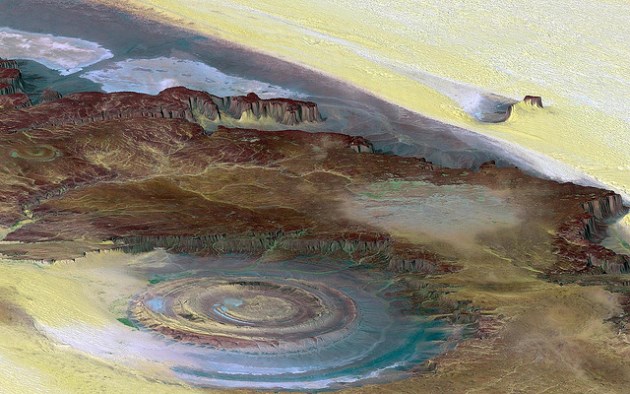 The most accepted theory of how the Richat Structure came about is that it’s an eroded anticline (a fold of different rock beds that is convex upwards). No, I’m not entirely sure what that is either… But, again, at least it looks pretty!