Home » Blog » Murderous mushrooms from around the world

To most of us, mushrooms are just a type of food – a spongy plate-filler to be either gobbled up or brushed aside, according to our personal tastes. However, there are roughly 14,000 species and only a very small number of these are ever chopped up and covered in garlic. Around the world, mushrooms come in a variety of forms, some of which display a shocking disregard for the lives of other species.

Weirdly, mushrooms are neither plant nor animal – they’re something else, a third thing, and perhaps this partly explains their willingness to murder members of the plant and animal kingdoms. These wise-guy fungi aren’t carrying out random killings but well-planned, targeted assassinations. Let’s take a look at some of their victims:

Oyster mushrooms (such as the golden oyster grown in China and Japan) are one of the world’s most widely eaten mushrooms. They’re simple to cook and are a great source of protein and antioxidants. Oyster mushrooms grow easily on decaying wood, helping it to decompose, and they can also break down environmentally damaging pollutants. This makes them sound like some kind of super mushroom – one of the good guys – but there’s another side to them. They also kidnap and murder nematode worms. 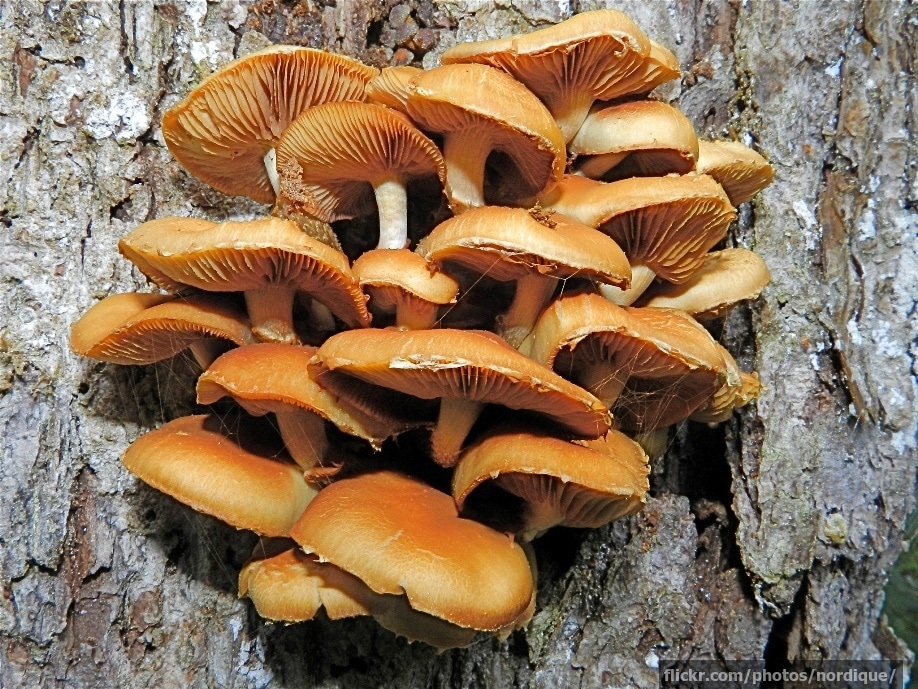 Perhaps believing themselves to be the cowboys of the mushroom world, oyster mushrooms use lassos to catch their prey. Obviously, they don’t swing the lassos around their head; they just leave the rings lying around and wait for a worm to wander in. As soon as one does, the mushroom detects the movement and pulls the lasso tight. Then it poisons the worm and absorbs all the nutrients from its wriggling body. It’s pretty clever but also pretty gruesome – not the sort of behaviour you’d expect from your stir-fry ingredients. 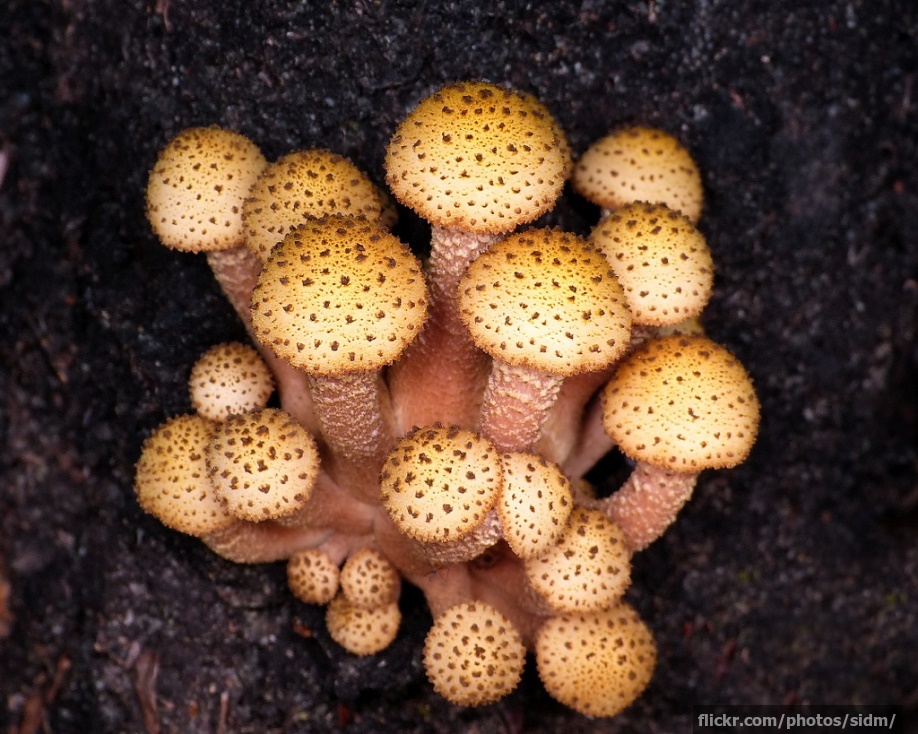 In most cases, trees and mushrooms have a good relationship. As well as turning dead vegetation into rich compost, mushrooms can make friends with living plants and can even end up sharing meals with them. Many species of fungus will attach themselves to a plant’s roots and begin swapping nutrients – the mushroom takes sugars from the plant but replaces them with goodness from the surrounding soil (allowing the roots to absorb far more than they could on their own). It’s a well balanced partnership, but one that’s open for exploitation – and Armillaria mushrooms do just that. 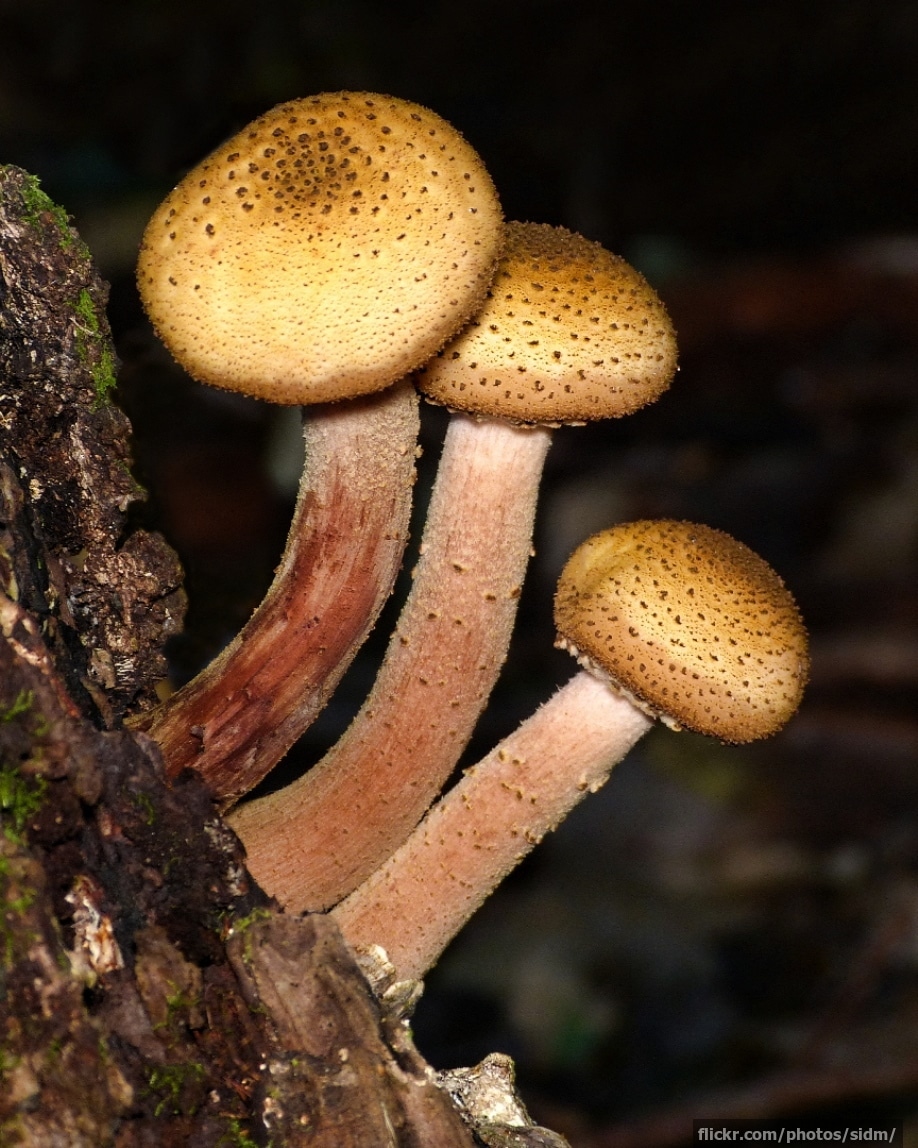 Armillaria, or honey fungus, doesn’t seem to understand sharing. Like other species, it attaches itself to a tree’s roots – but from that point on it’s just take, take, take. The honey fungus sucks out all the sugars that the tree produces but doesn’t bother giving anything back and eventually the tree just dies. In the parasite world, murdering your host is a bit of a schoolboy error; but mushrooms don’t seem to care – they can grow just as well on a dead tree as they can on a living one. 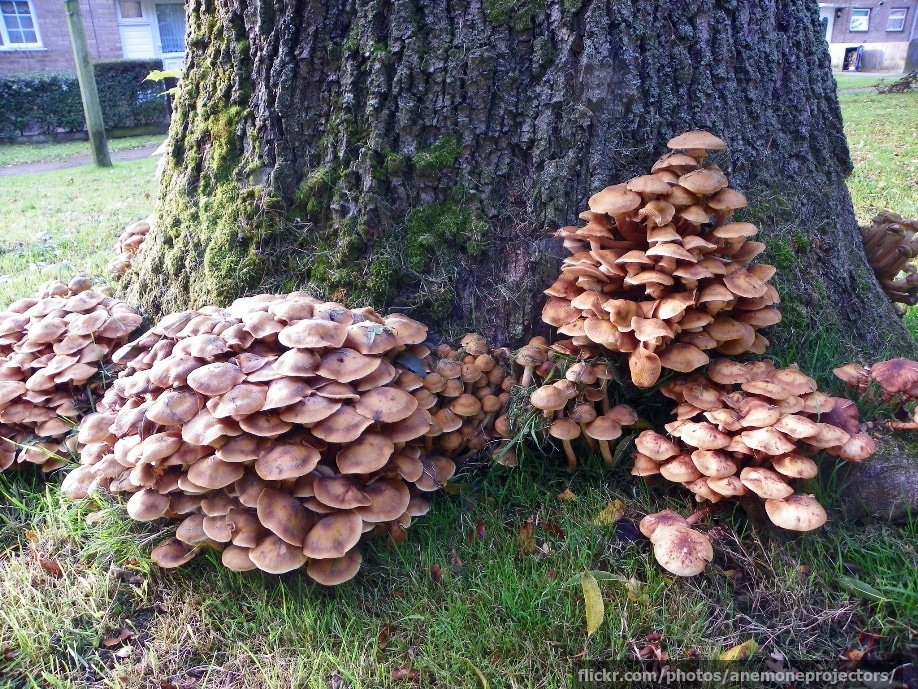 Honey fungus is such a successful killer that one individual mushroom has grown to be the largest organism on the planet. The fungus has been eating its way through the forests of Oregon, USA, for the past 2,400 years and now covers an area of around 9km2. The mushroom is edible to humans and there’s plenty of it so, if you’re a mushroom fan who wants to taste a murdering giant, why not fly over and take a bite? Just remember your travel insurance! 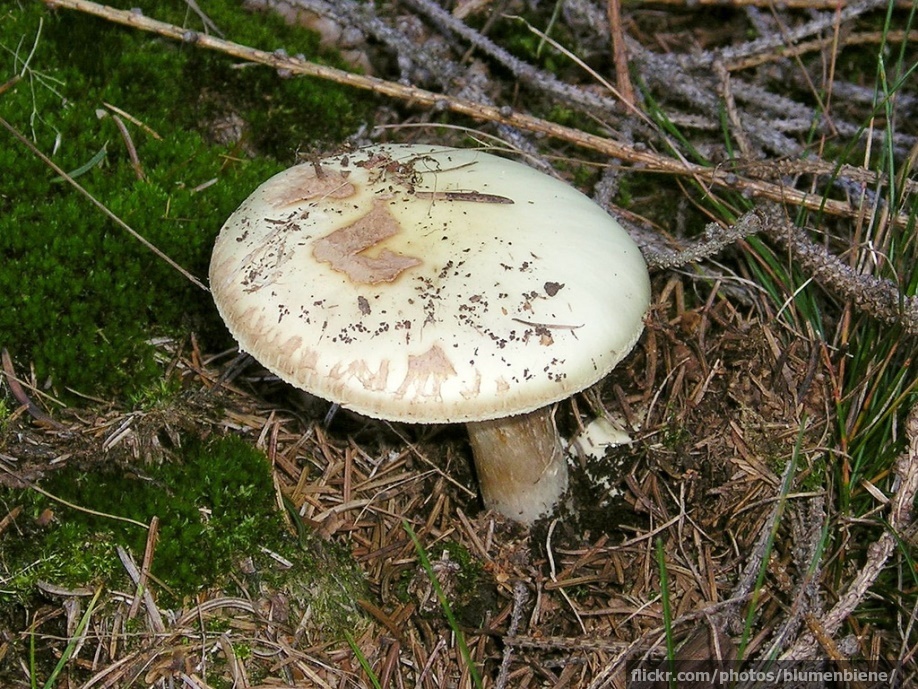 Of course, they’re not going to come after you and catch you and kill you, but poisonous mushrooms have been responsible for thousands of human deaths. This isn’t cold blooded murder like with some of the other examples here – it’s more like the mushroom is taking revenge for having been being boiled into a soup (not that this would be any defence in court). 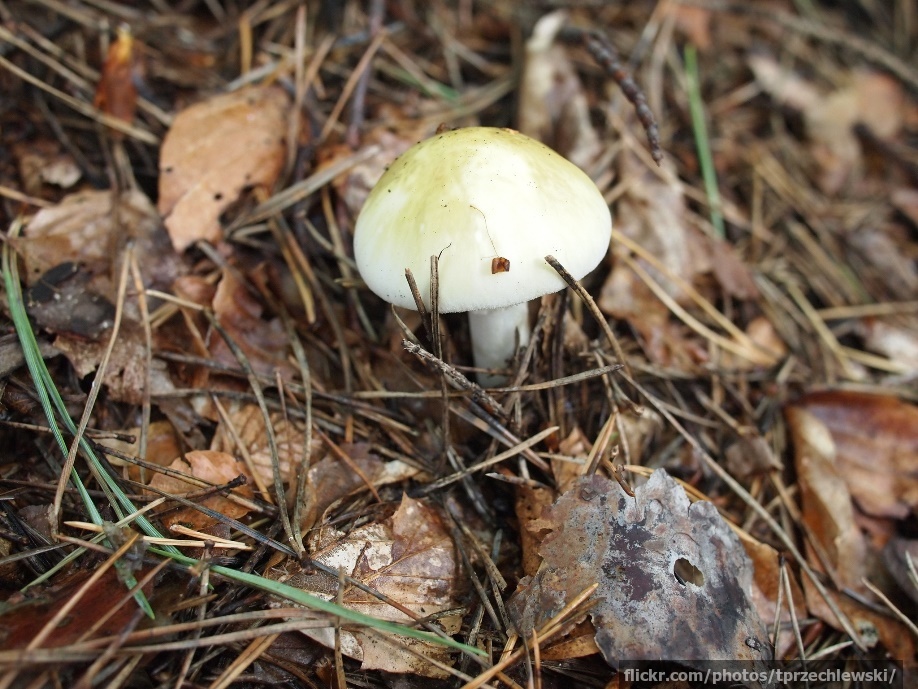 The most deadly mushroom is Amanita phalloides – the death cap. Growing throughout Europe, the death cap looks similar to (and is found in in the same places as) numerous, delicious, edible mushroom species, so misidentification is the most common cause of poisoning (which makes sense – very few people deliberately pick and eat deadly fungus). The death cap can kill a man with just half of its top bit (about 30g) and, as the symptoms aren’t immediate, by the time people seek help, it’s often too late. 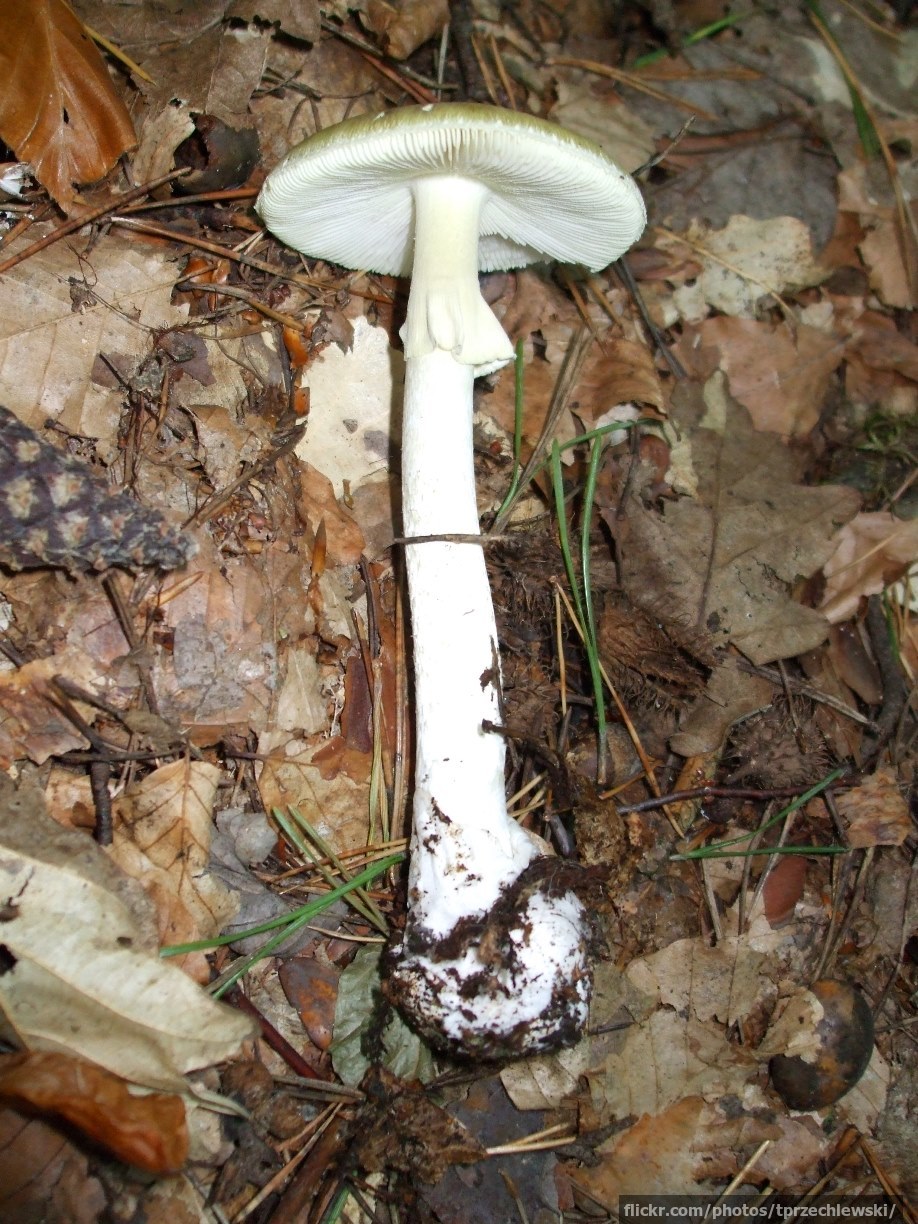 Mushroom poisoning starts with vomiting and diarrhoea – all that good stuff – before the real damage is done to the internal organs. There’s no antidote, but medical advances have reduced the death cap’s fatality rate from 70% to around 10% (although in many cases only a liver transplant will save the life of the mushroom muncher). All this sounds rather unpleasant but, on the positive side, people who’ve eaten a death cap and survived, say that it did taste quite nice. 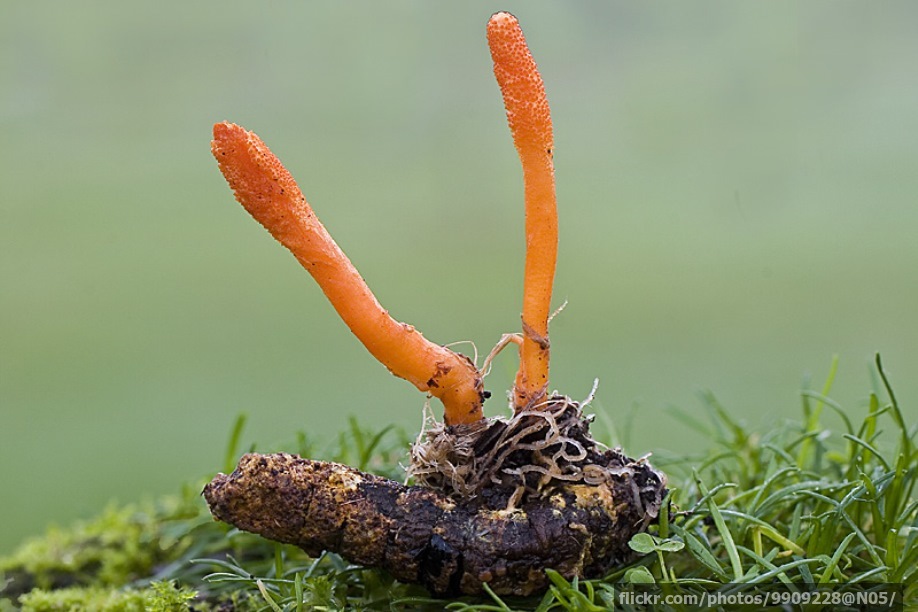 Ants, grasshoppers, caterpillars – no insect is safe from the killer mushroom cordyceps. 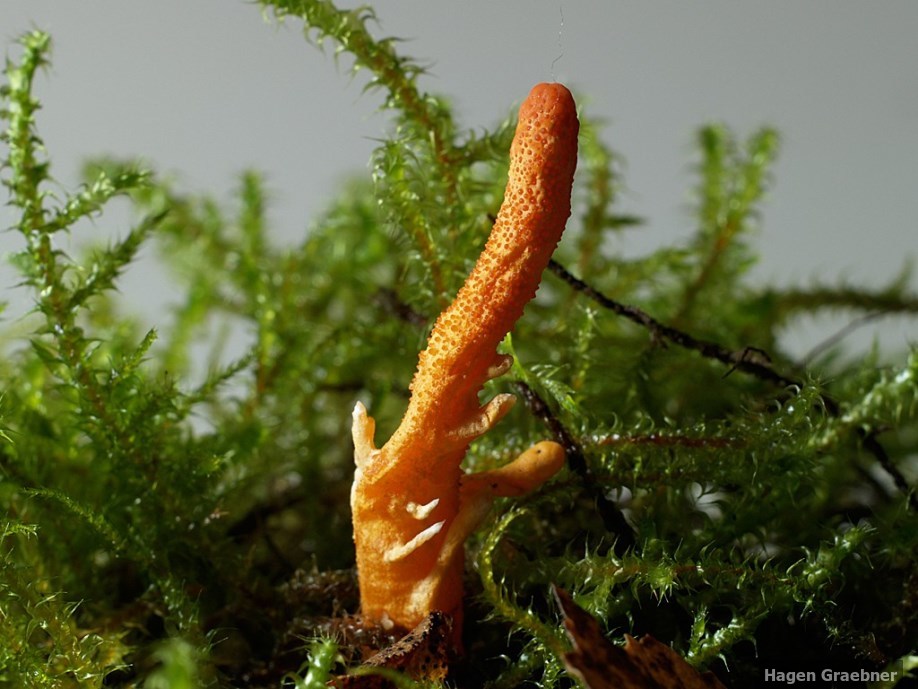 Rather than simply catching the insect and eating it (like the oyster mushroom does with the worms), this fungus murders it’s victims in a far more dramatic way. An insect infected by a cordyceps spore will (initially) carry on as if nothing has happened – but something has happened and the insect’s insides are slowly being replaced by the fungus. It may not have known anything about it to begin with, but the insect will have a pretty good idea that something’s wrong by the end – when a mushroom suddenly pops out of the top of its head. 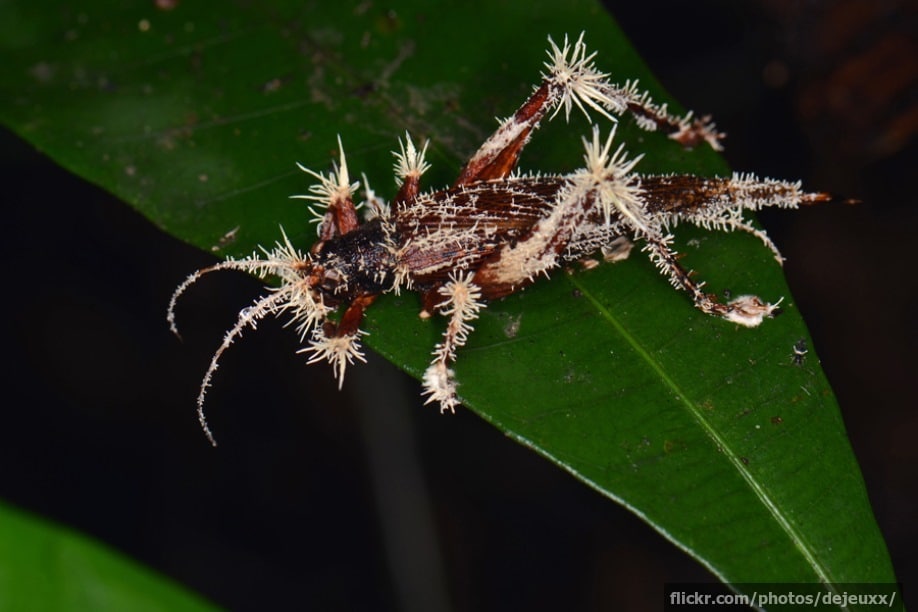 Cordyceps prefers warm forests, and most of the 400 species in this group are found in Asia (so British caterpillars have less to worry about).

In some cases, the fungus can influence the insect’s behaviour – infected ants sometimes climb onto higher branches before succumbing to the parasite (presumably so that when the mushroom breaks out of the body and spreads new spores they’ll cover a larger area). It’s interesting, and terrifying, to consider how much of this behaviour is the ant and how much is the mushroom – which one is doing the thinking?