Bridges connects things. It’s the most important thing about them. Literal bridges connect one piece of land to another. Metaphorical bridges connect one person (or thought, or idea, or thing) to another. If a bridge doesn’t link something (or someone) to something (or someone) else, can it really be called a bridge? If it can’t, what’s it called? And if it can, what effect would this have on the word’s use as a metaphor? Would we have to start using “tunnel” instead?
While you’re pondering this deep philosophical quandary, let me show you four bridges that don’t connect anyone or anything to anyone or anything else. 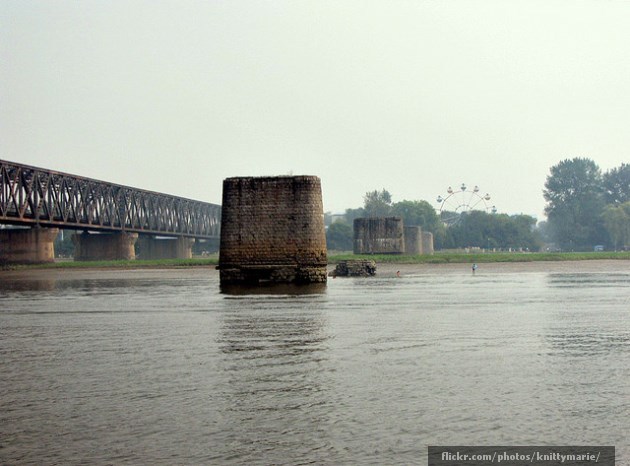 You know what they say about burning your bridges? Well, that analogy isn’t entirely relevant to this story but it does contain the word “bridge” and as this first bridge was once on fire, I thought I’d throw it in. 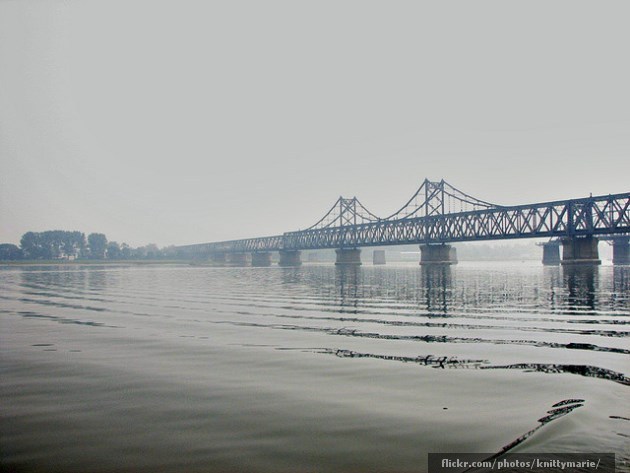 There have actually been two Sino-Korean Friendship Bridges; the first was built in 1911 and the second, which is still in use today, was built in 1943. Both bridges link (or in one case, linked) the Chinese city of Dandong to the North Korean city of Sinuiju. 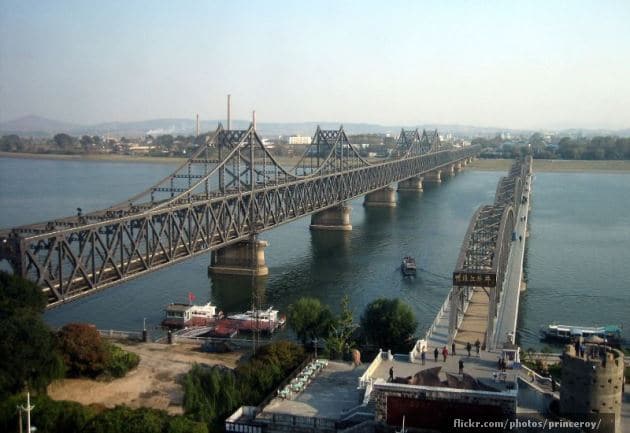 The name “Sino-Korean Friendship Bridge” might sound rather sweet, but it also explains why both bridges were bombed during the Korean War. You see, North Korea and China were friends during the war and the bridges were used by the Chinese to transport supplies to North Korea. The US (who weren’t friends with either country) bombed both bridges between November 1950 to February 1951, and the Chinese and the Koreans repeatedly repaired them. 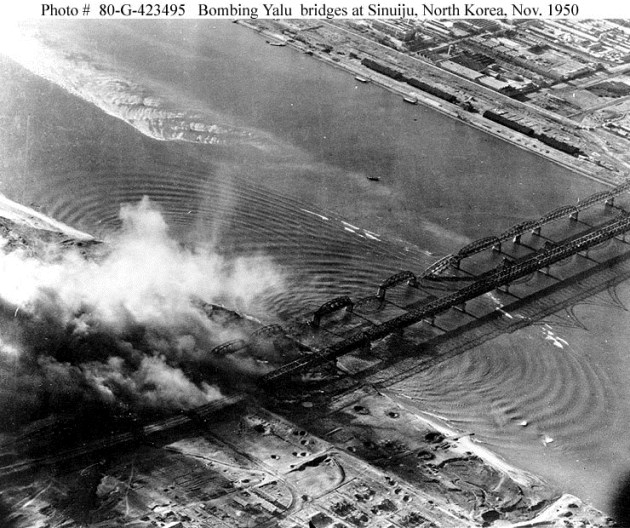 In the end, the 1943 bridge was repaired and the 1911 bridge was left destroyed. The North Koreans claimed they didn’t want to repair it so the US couldn’t deny the fact that they’d destroyed it, and a bridge to nowhere was born. Now, just four spans of the bridge remain on the Chinese side of the river. 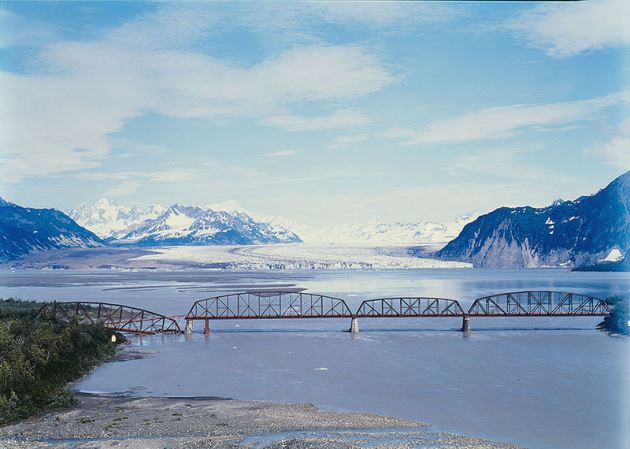 Built between 1906 and 1911 as part of the Copper River and Northwestern Railway, the Miles Glacier Bridge cost $1.4 million, leading to its nickname – the Million Dollar Bridge. I don’t know if that’s particularly expensive for a bridge; I’m no bridge expert. All I know is that I probably couldn’t afford to build one. Not without going well into my overdraft, anyway. 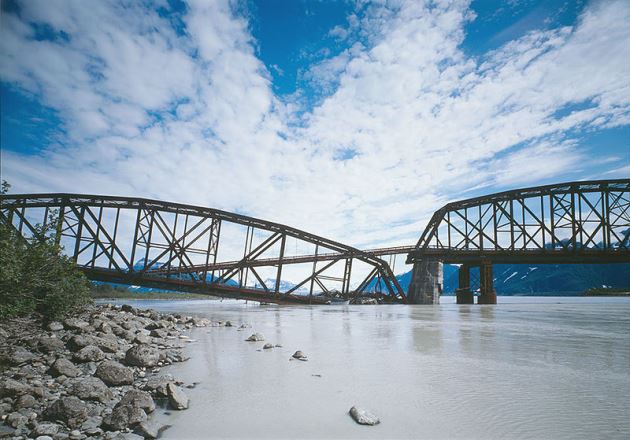 Just as it’s true that money can’t buy you love, it also seems to be true that money can’t buy you an earthquake-resistant steel and concrete bridge. One of the bridge spans slipped off its foundation after it was damaged during the 1964 Alaska earthquake. Rather than repair the bridge properly, it was fixed temporarily with cables, I-beams and planks. These quick fixes made the bridge passable until it was damaged again as a result of severe flooding in September 1995. 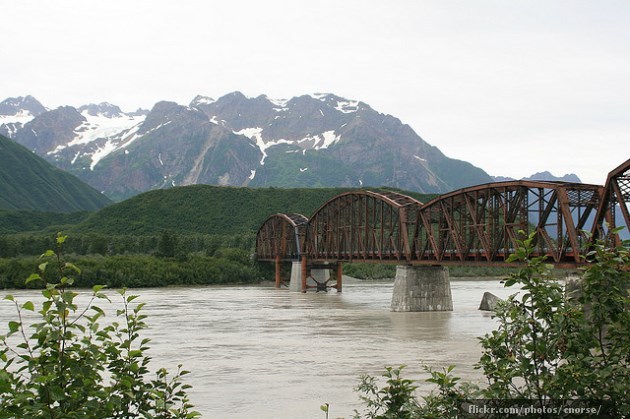 The bridge was eventually repaired permanently between 2004 and 2005 after state engineers determined that it would be cheaper to fix the bridge than to remove it completely. By the way, in this context, “cheaper” means over $19 million dollars. Ouch.

This is the oldest bridge-to-nowhere in the list. In its heyday, the Pont Saint-Bénezet spanned the Rhone River, connecting the French town of Avignon to the also-French town of Villeneuve-lès-Avignon. The bridge’s heyday started between 1177 and 1185, when it was built; paused temporarily between 1226 and 1234, when it was damaged in a siege; and stopped permanently some time during the 17th century.

The bridge was already missing four arches by 1644 and was damaged further by a catastrophic flood in 1669. Today, only four of the initial 22 arches are still standing. After the bridge’s collapse, the river had to be crossed by ferry until the 19th century, when a wooden replacement was built. It’s a wonder no one thought of doing that sooner. They clearly didn’t have the same issues with sea sickness that I have…

Or they just didn’t have enough wood.

This bridge to nowhere must look at the other bridges in this list and scoff. “Ha! ‘Bridge to nowhere’?”, it’d snort, derisively. “You don’t know the meaning of the phrase. I’m the only bridge worthy of the title.” You see the first three bridges in the list did actually spend some time being bridges to somewhere; this one was never connected to anything!
The bridge was built across the Mangapurua stream to allow access to newly created farmland after World War I. However unfortunately, the land proved to be too isolated and difficult to get to, so the planned roads that were going to link the bridge to somewhere were never built. Now, the only way to reach the bridge is by boat or kayak, followed by a 45-minute walk through the bush. 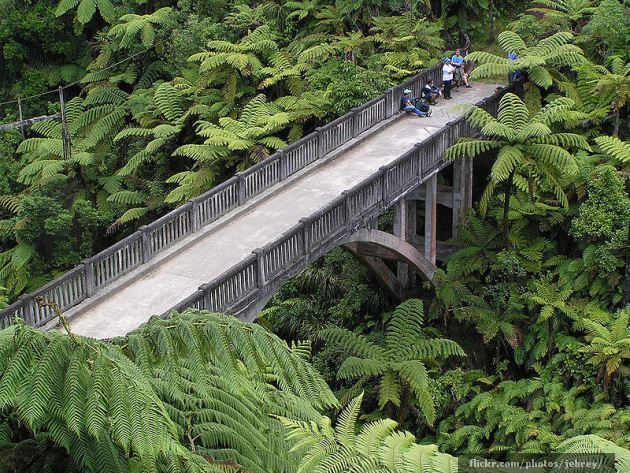 For visitors who have a few minutes to spare, a sign describes the bridge’s tale of woe in great detail:

Started in January 1935 and completed in June 1936, this bridge was built by the Raetihi firm of Sandford and Brown, for the Public Works Department. It is 130 feet long, and 125 feet above the stream. The cost of labour was 598 pounds 11 shillings 7 pence, and cartage of all materials (via the Mangapurua Valley road) cost 419 pounds 14 shillings. Unfortunately the cost of materials was not recorded. Aggregate for the concrete is said to have been transported from the Rangitikei River. The completion of the bridge was delayed considerably due to floods, slips, and the consequent delay in the supply of materials. The bridge was built to facilitate vehicular access to the Wanganui River, to link the settlers of the valley with the riverboat service. In 1917 the Government opened up the valley for settlement by soldiers returning from World War I. Virgin forest was cleared, and a total of 35 holdings developed. A school was opened, and for some years the valley prospered. However economic hardship, and problems associated with the remoteness and difficulty of access, resulted in many families abandoning their farms. By 1942 there were only 3 families left. After a major flood in January 1942 the Government declined to make further funds available for road maintenance, and it officially closed the valley in May 1942. The disappearing road line, old fence lines, stands of exotic trees, occasional brick chimneys, and this bridge serve as reminders of the ill fated settlement of the Mangapurua valley. 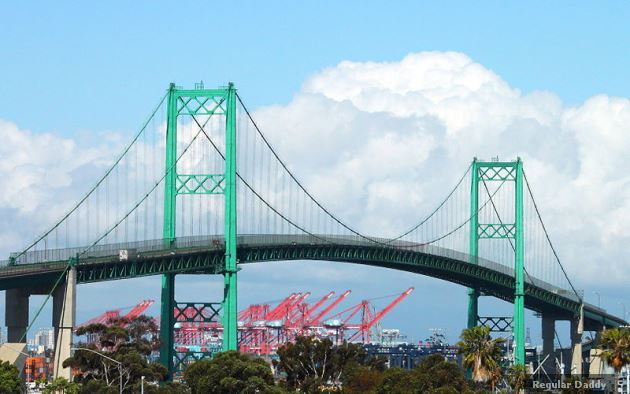 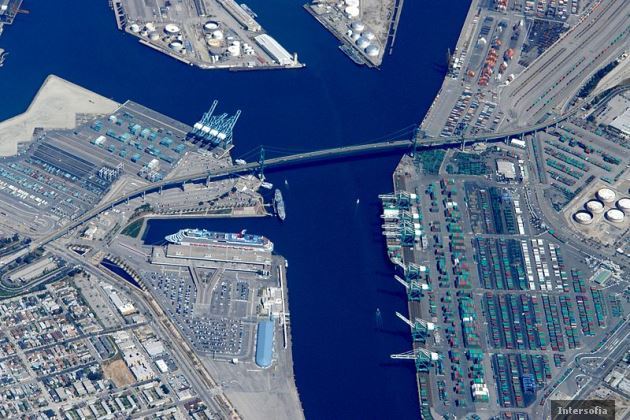 In an attempt to link the district of San Pedro with Terminal Island, the Vincent Thomas Bridge was built in the early 60s, opening officially in 1963. Throughout this time, and for a while after its opening, the bridge was derided as being a “bridge to nowhere”. This was because, at the time, Los Angeles Harbour had yet to become the US’s busiest port. 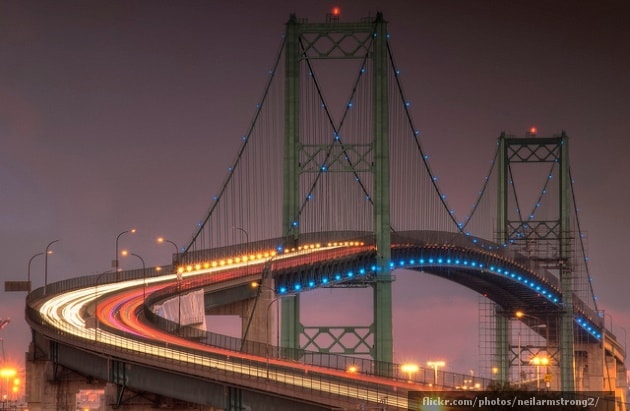 This changed in the 1970s, as the ports of Los Angeles and Long Beach took over from the those of the San Francisco Bay Area as the main ports of the west coast. Today, the Vincent Thomas Bridge accommodates 32,000 vehicles a day and probably looks back on its day as a bridge to nowhere and laughs. It’s almost like a Disney film. One that wouldn’t really do very well at the box office…