Home » Blog » 403 strange underwater things from around the world

On a planet that’s 70% water, it’s perhaps no surprise that there are some interesting objects under the sea. Here we take a look at just 403 of them. Some of these things occurred naturally; some were put there deliberately. One of them may have been made deliberately but nobody can remember.
Take a deep breath… 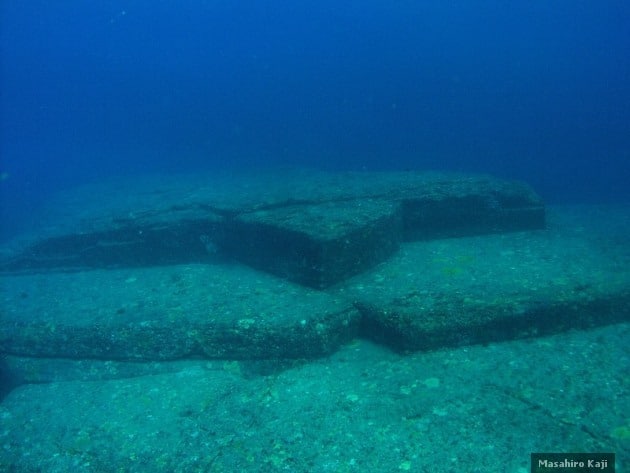 The Yonaguni Monument off the coast of Japan is a site of much debate among geologists and archaeologists (well, they debate it when they get back to the surface). Opinions differ over whether the giant rock formations are natural, man-made or a combination of the two. The use of the word “monument” in English is a bit non-committal, but the Japanese seem to have fewer doubts about the site’s human construction, which is why they call it 与那国島海底遺跡.
The monument’s main structure is massive (490 x 130 x 90 feet), and is defined by flat surfaces and straight edges. Those who believe the formation to be natural say that the monument’s sandstone contains many layers that can break off cleanly, leaving these geometric shapes. Those who believe the structure is man-made, however, point to the rock’s right-angled corners and straight rows of holes to be evidence of human involvement. I’m no geology expert, but I have seen some videos of the site on YouTube, so I feel qualified to say that the monument was definitely made by people. 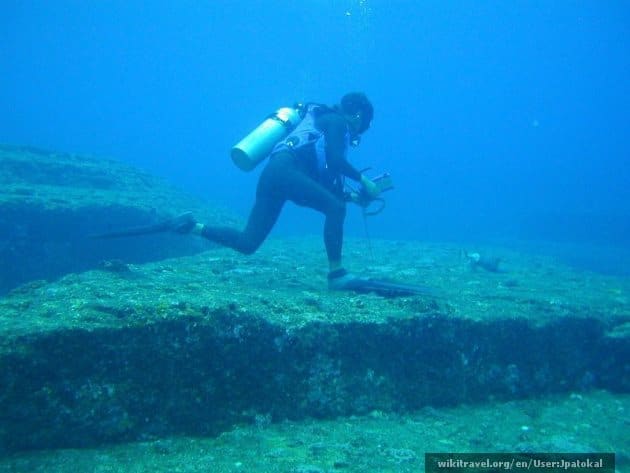 If humans were involved in shaping the Yonaguni rocks, they wouldn’t have done it underwater. Two theories exist for how they could’ve achieved this – either the monument was formed during the last ice age, when sea levels were lower, or it was constructed on land but then swallowed up, Atlantis-style, following a large earthquake. Either way, it wasn’t made recently. It’s strange to think that ancient civilizations may have been making such large structures that we, as a species, simply forgot all about. 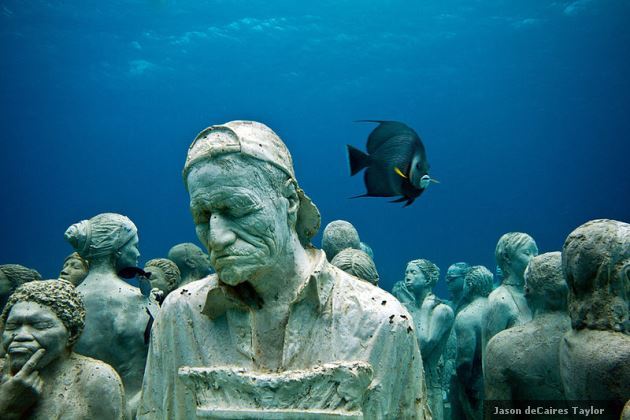 Just off Cancun, you can find 400 Mexicans under the sea. This isn’t a grisly, gang-related crime scene though, but an underwater sculpture museum by British artist Jason deCaires Taylor. 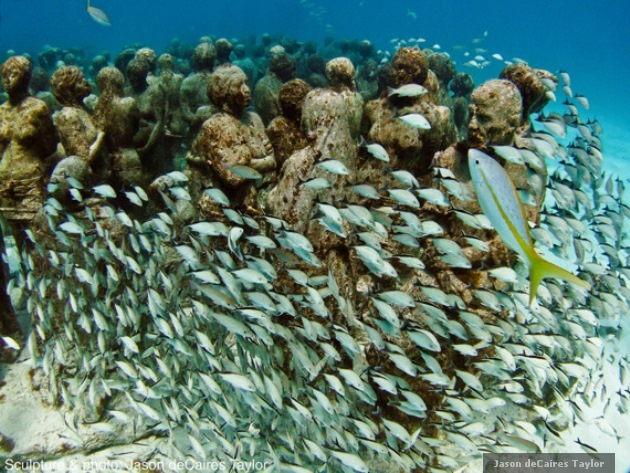 Taylor took casts from 400 different Mexicans to create his statues, which were then placed on the seabed at depths of up to 12 metres. Apparently, of the 400 models, not a single one thought it would be funny to pull a face as if they were drowning. 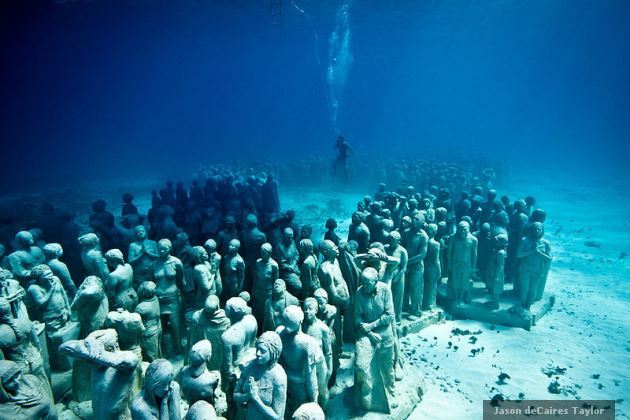 The sculptures are an example of eco-art and have an environmental benefit. Each one is made from pH neutral material and is placed deliberately to encourage coral growth. These artificial reefs provide a home for sea life and, by attracting tourists away from natural reefs, allow them to recover and flourish. By using human forms for this purpose, Taylor hopes to show how people can have a positive impact on their environment. It’s fair to say that, as underwater statues go, these are significantly more impressive than the little diver who lives in my fish tank. 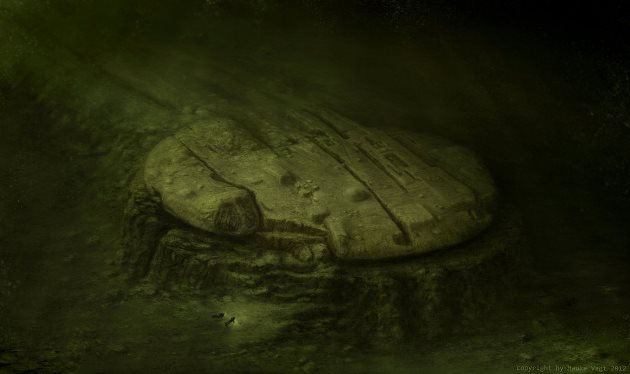 Could a flying saucer really have crash landed in the Baltic Sea? I suppose it’s no more unlikely than a flying saucer crash landing anywhere else.
A Swedish research team, in the area looking for shipwrecks, were surprised to find a curious circular formation beneath the water. This big round object, 60 feet in diameter, appears to have left tracks behind where it has scraped along the seabed (just like the tracks a crashing UFO would form or, for that matter, anything else moving in a straight line through the sand). Strangely, this potential flying saucer looks almost exactly like the Millennium Falcon which, as all true Star Wars fans know, was the spaceship driven by Darth Vader.
Of course, UFO stands for “unidentified flying object” so, without further evidence, the Baltic Sea find remains just a UO. Further explorations are needed to determine exactly what’s down there, but these could be very expensive. If the object does turn out to be an alien spacecraft, it would be possibly the greatest discovery in the history of mankind; if, however, it’s just an unusually-shaped pile of rocks, the whole expedition would be a massive waste of money. So far, nobody has been prepared to take the gamble. 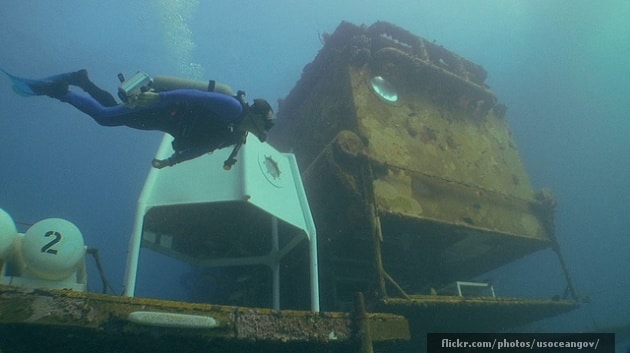 Four miles off the Florida coast (and 50 feet down) is the Aquarius Reef Base, a marine research centre. Divers swim down to the base, then pop up through the wet porch into a scientific laboratory. The underwater facility measures 43 x 20 feet (similar to my flat), contains only basic home comforts (similar to my flat), and is located in an inhospitable, sometimes dangerous environment (exactly like my flat).
If you think it’s tough sitting with the same people at work every day, spare a thought for the scientists aboard Aquarius. Six aquanauts at a time are locked in the facility, for periods of up to two weeks, all under the oppression of 2.5 atmospheres. Any arguments within the base need to be quickly resolved – anyone wanting to storm out for a long lunch would have to first undergo a 16-hour decompression procedure. 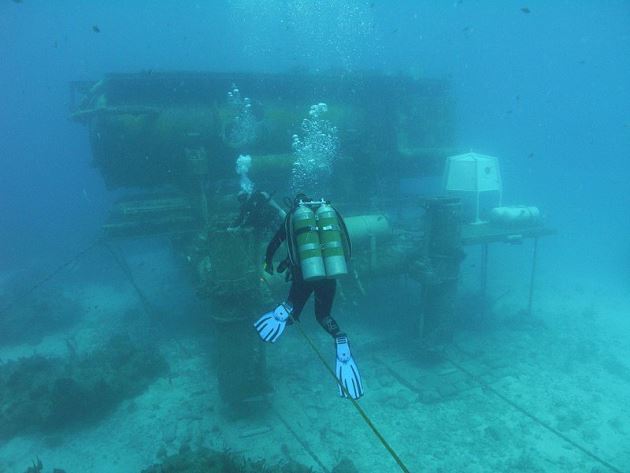 When it was first sunk in 1988, Aquarius was painted yellow (as all submarines should be). Since then, the outside of the base has lost its shine and has begun to blend in with the surroundings. It’s nice to imagine that, like the Yonaguni monument, future humans might find the submerged facility, covered in dirt and barnacles on the bottom of the sea, and be totally confused about what it’s doing there.