Home » Blog » 5 lovely castles from around the world

Castles have always had a certain magical quality about them. They inspire feelings of romance, chivalry and heroism that you just don’t really see around these days. So we’ve found five of the most interesting and beautiful castles from around the world to enable you to rekindle a little of that medieval magic. 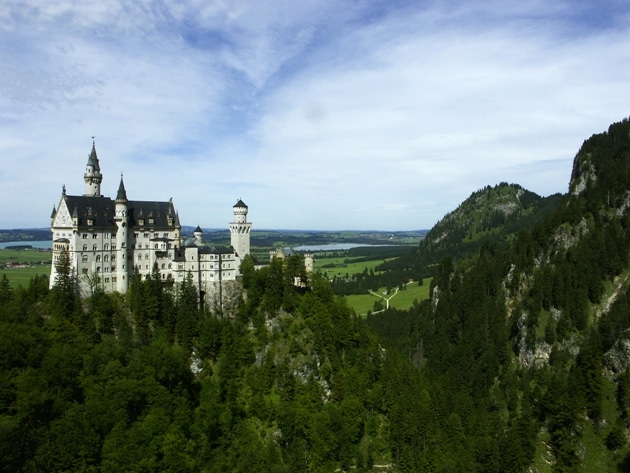 When you imagine a castle, there’s a strong likelihood that you will picture something like this one. Neuschwanstein was designed by King Ludwig II of Bavaria (aka “Mad King Ludwig”) in the 19th century as a getaway for himself and somewhere he could immerse himself in the music of Wagner, with whom he was almost obsessed. (Just to be clear, that’s Richard Wagner the classical composer, not Wagner from The X Factor.)

The reason you’re likely to view this as the “classic” castle is all down to Disney; it was the inspiration behind their Sleeping Beauty castle which is on their Disneyland logo and is photographed around a million times a year. Despite its current popularity – around 1.3 million people visit it yearly – and its obvious fairytale beauty, it wasn’t always so popular. There was a rumour that the King, in his quest for the perfect castle, bankrupted the state of Bavaria by using public money for his private abode. Luckily it was just a rumour; he actually used his own money to build Neuschwanstein, and got into a lot of debt doing so. 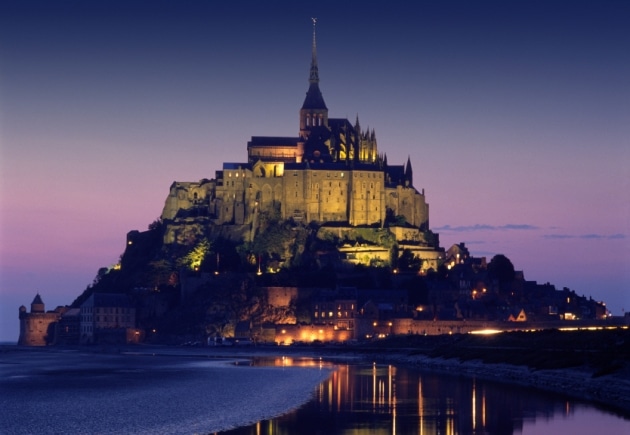 This isn’t strictly a castle, but an island. In the 6th and 7th centuries, however, it was used as a British-Roman stronghold until it was ransacked by the Franks, so it kind of did the job of a castle and, well, it looks like one! The tower you can see is actually the steeple of a church and much of the rest of it is a Benedictine abbey.

What made Mont Saint-Michel so unusual is that it wasn’t always cut off from the mainland. It’s situated around half a mile off of the north-west coast of France. Originally, when the tide was out, a causeway was exposed and, once the tide came back in, the island was cut off again. However, in more recent years this hasn’t been the case. The Couesnon River, which forms an estuary around the island, was canalised, reducing the flow of water and creating a silt buildup around the island, making it less-islandish. To try and prevent this, the causeway was built up so it was no longer tidal, but permanent. Luckily, in 2006, the French prime minister started the Mont Saint-Michel Project which aims to rid the island of the built-up silt and get rid of the causeway, replacing it instead with a bridge. The project should be completed this year.

The castle in a cave – Predjama Castle, Karts, Slovenia 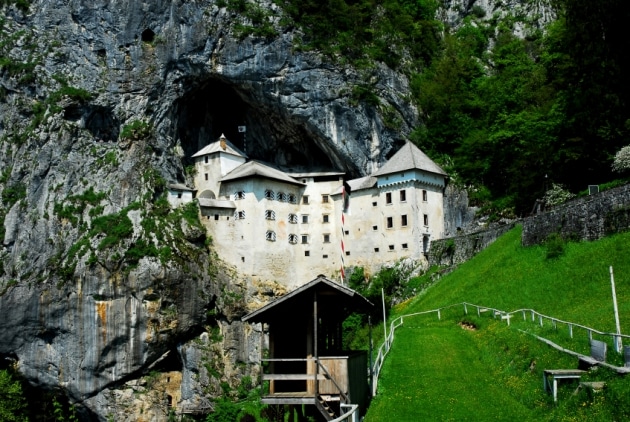 Predjama Castle, or Jama (meaning cave) Castle as it is sometimes known, is located in the middle of a 123-foot limestone cliff, at the entrance of a cave. Just how it was built I am not sure, but it must have been harder than building your average castle, not that I have a lot of experience in that field. It is suspected to have been built in the 12th century, although there was no written reference to it until the 13th century.

As with most castles, Predjama has had many inhabitants, but probably the most famous was a knight called Erazem. He was a naughty knight and committed murder in Vienna, so to avoid punishment, he returned to his castle, which was later seized by Lord Ravbar on orders of the Austrian Emperor. Ravbar tried to starve Erazem to death but was surprised when he just wouldn’t die! It turned out that Erazem was using a network of tunnels to pop out and buy fresh food when no one was looking. Ravbar eventually succeeded in dispatching Erazem when he bribed a servant to let him know when Erazem went to the loo. The toilet was the only place in the castle that was vulnerable, so when the time came, the servant gave the signal using a flag and a cannon ball was fired straight at Erazem on his ‘thrown’ killing him. What an end! 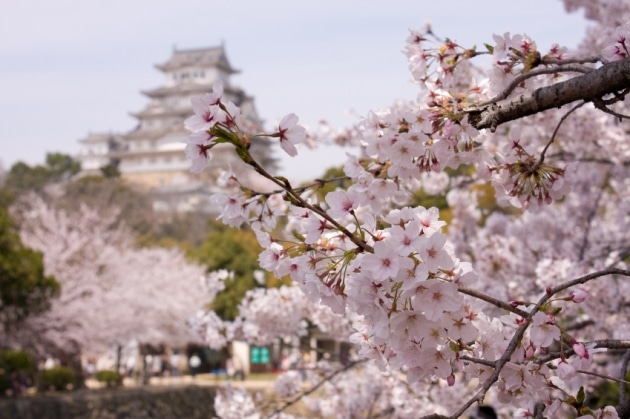 Now, when I think of castles, I don’t think of Japan. But actually, Japanese castles are truly beautiful buildings that look at lot more like works of art than fortresses. Himeji Castle is considered one of the most spectacular and is sometimes known as Shirasagi-jō, which translates to “White Herron Castle”, because of its white exterior and because the shape of it looks like a bird taking flight. I won’t lie, I can’t really see that.

The need for castles in Japan developed in the 15th century. It was around this time that the government’s authority had started to weaken and the states that existed at the time started to fight with one another. So for defence, purposed castles were built upon hills and mountains.

Himeji Castle, like most old buildings, has its very own ghost story. And it’s a horrible one at that. Okiku was a beautiful young servant girl who was tricked into believing she had lost one of 10 precious dishes, a crime that was punishable by death. She confessed to her employer who offered to overlook this if she became his lover. She declined, so he threw her down a well to her death. Unbeknown to Okiku, her employer, a Samurai, had set her up. The well still exists to this day, and if you listen carefully at night you might hear the ghost of Okiku counting nine plates, over and over again. 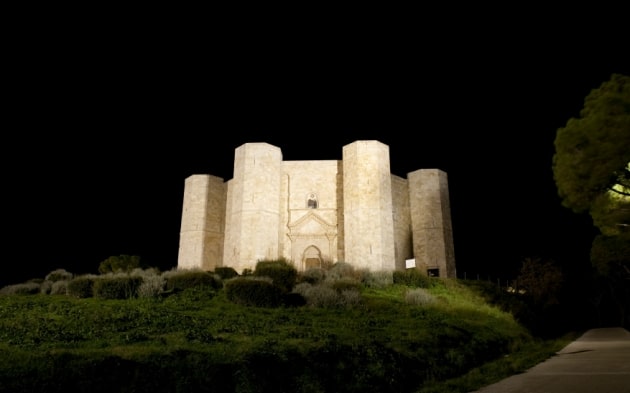 The Roman Emperor Frederick II was responsible for building this unique castle in 1240, which took 10 years to make. The castle doesn’t have a moat or a drawbridge, it is not near a town and, unfortunately, its interior furnishings and marble decorations were looted many years ago. This, coupled with its unusual shape, means the original purpose of the castle has been hotly debated. Some say it was a military fortress, a place of occult worship or an astronomical observatory, but the most common theory is that it was a hunting lodge for Frederick.

Not knowing why it was built seems to be irrelevant now. The castle is so unusual and beautiful, it has become a protected world heritage site, and it features on the back of the Italian one cent coin. The castle is in the shape of a large octagon, with eight symmetrical towers. It has just one entrance and eight identically sized and shaped rooms each leading on from the last, making it possible to do a full circuit around the interior courtyard, which is also an octagon. Fred likes octagons, clearly. At the time of building, a square represented the earth and a circle represented the heavens and the sky. So the octagon was a cross between the two, which is why some people believed the purpose of the castle was to unite the two and practice the occult.

If you’re heading to a castle or a café, don’t forget to arrange travel insurance before you leave.