Jayavarman VII built Ta Prohm in 1186 and, just as all good warrior kings should, he dedicated the temple to his mother. The massive site, surrounded by a 1,000 by 650 metre wall, features numerous towers and other buildings, some of which have pictures carved into their stone surfaces. Like many Buddhist temples, these carvings include images of Buddha, of animals from the surrounding jungle and of meditating monks. Unlike many Buddhist temples, these carvings also include an image of a stegosaurus. 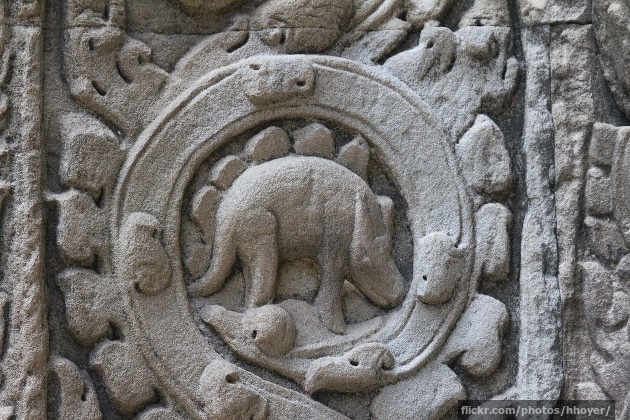 Naturally, there’s a bit of a debate about how a picture of a dinosaur ended up on an 800-year-old Cambodian temple. To some people, the carving is proof that humans and dinosaurs co-existed – although it’s hard to imagine that the temple would’ve remained in such good condition if there really were giant lizards stomping around the jungle (we’ve all seen what Godzilla did to Tokyo, after all, and that was a city built to modern construction standards). 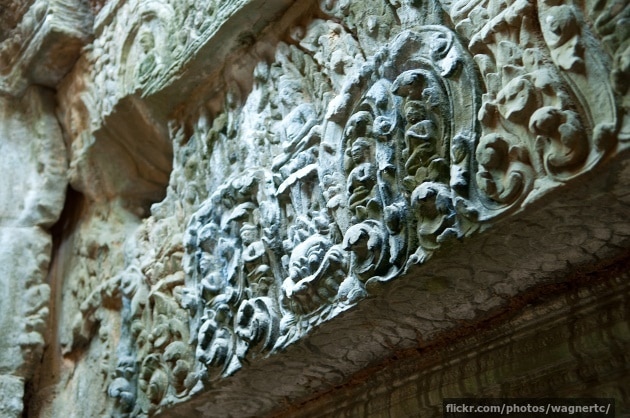 The theory that the Ta Prohm carving really does show a stegosaurus suggests that, even if dinosaurs were extinct by the 12th century (which they probably were), they must’ve survived at least long enough to interact with humans and enter the cultural memory. Given that stegosaurus fossils have only ever been found in North American and Western Europe (and that dinosaurs are thought to have become extinct 65 million years before modern humans, or travel insurance, evolved), this would be quite an amazing discovery. 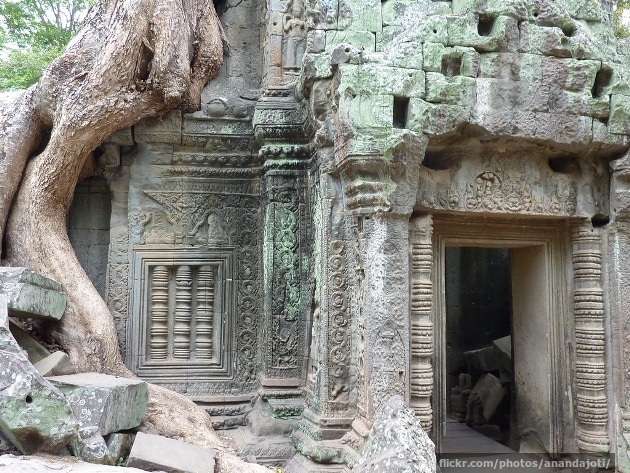 Some more carvings around a doorway

An alternative theory is that the carving is simply not very good, and that it’s supposed to be a picture of a cow or rhinoceros, possibly standing in front of a leafy plant.

These days, the temple at Ta Prohm is one of Cambodia’s major tourist attractions. Thousands of people from around the world visit every year, not to look at the vaguely dinosaur-shaped carving, but to see how the buildings, abandoned for hundreds of years, are being slowly absorbed back into the jungle. 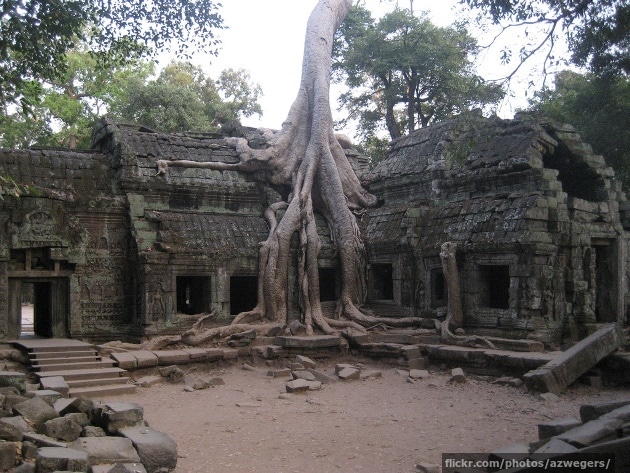 Ta Prohm is being retaken by the jungle

There’s something to be said for simply abandoning buildings and letting nature take its course. If the temples at Ta Prohm had been properly preserved since the 12th century – kept clean and tree-free – they’d still be impressive, but it wouldn’t be the same, would it? The tree roots forcing their way through the stonework have become so much a part of the site that they almost look like they were supposed to be there. 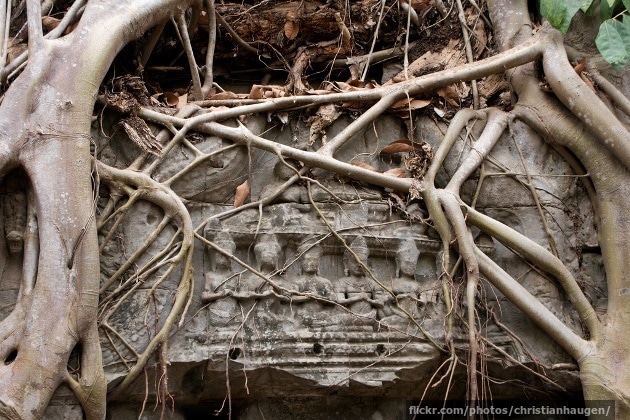 Trees growing out of the ruins

Of course, while nature reclaiming buildings is often impressive, a lot of the special atmosphere at Ta Prohm has to do with the fact that the trees are growing over ancient Buddhist temples. Once our current society crumbles, and Mother Earth moves in to retake the land, the result is unlikely to be so special – it’s hard to imagine future civilisations being amazed by a birch tree growing on top of an abandoned branch of Dixons.