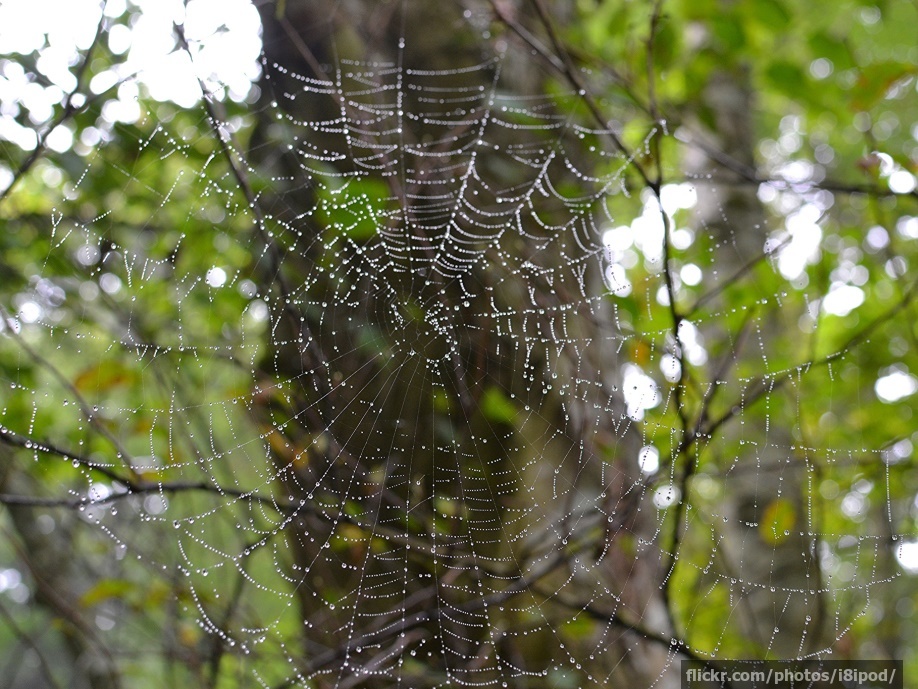 Despite their reputation as terrifying mankillers, spiders aren’t actually that dangerous. Amazingly, there were only 100 verified spider-bite deaths in the whole of the twentieth century – that’s just one person a year, so you’d have to be pretty unlucky for it to be you. The statistics may be strongly in favour of spiders being non-scary, but that doesn’t stop people claiming to be arachnophobic (a self-diagnosis that’s especially popular in Europe, despite there being relatively few deadly spiders).

If you know someone with an irrational fear of spiders, why not do a good deed and share some of the following information (or pictures) with them: 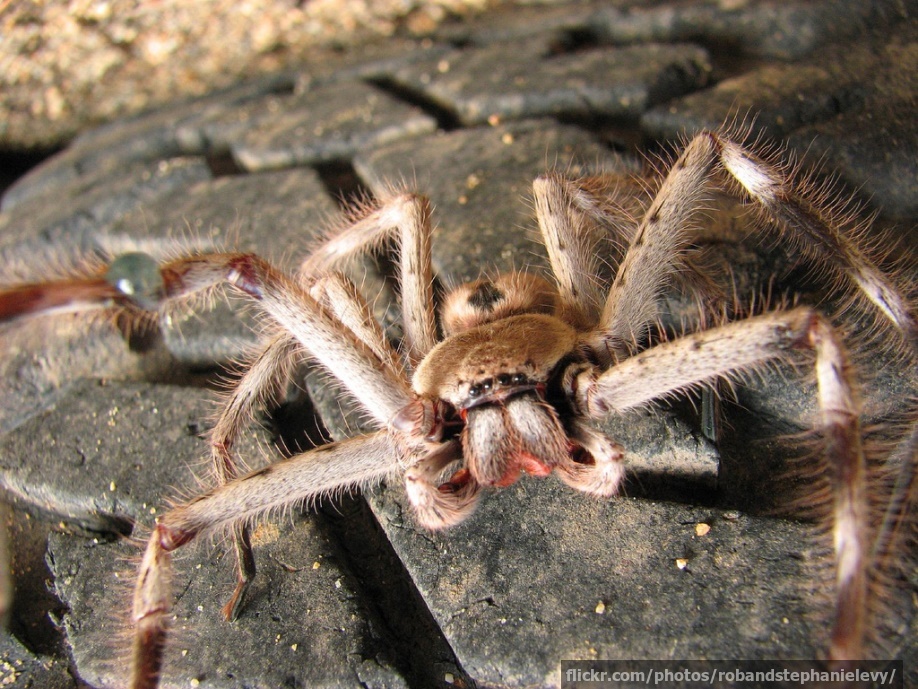 I’m not really scared of spiders (in my house I’m in charge of the glass), but I must admit that the giant huntsman is a little bit worrying even to a big brave man such as me. The giant huntsman is the largest spider in the world, with a leg-span of up to 12 inches – imagine a dinner plate, then imagine a spider on that dinner plate, then imagine that that spider is so huge that its legs are hanging over the sides of the dinner plate. Fortunately for everyone who thinks that’s a horrible image, unless you find yourself in a cave in Laos (with a dinner plate), you’re unlikely to ever have to experience it. 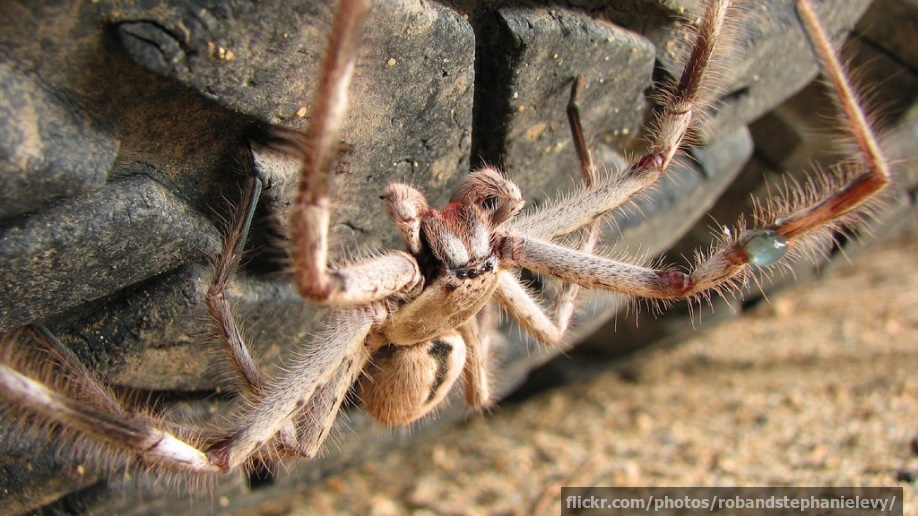 To put the giant huntsman’s size into some sort of perspective, the largest fossilised spider ever found is a 135-million-year-old specimen from China. Some of the legs are missing, but from the ones that remain, it’s possible to tell that the spider would’ve had a leg-span of around two inches – six times smaller than the giant huntsman. I don’t really know how to analyse that trend, but if I had to guess I’d say that spiders are growing at an alarming rate and it won’t be long before they start eating people. 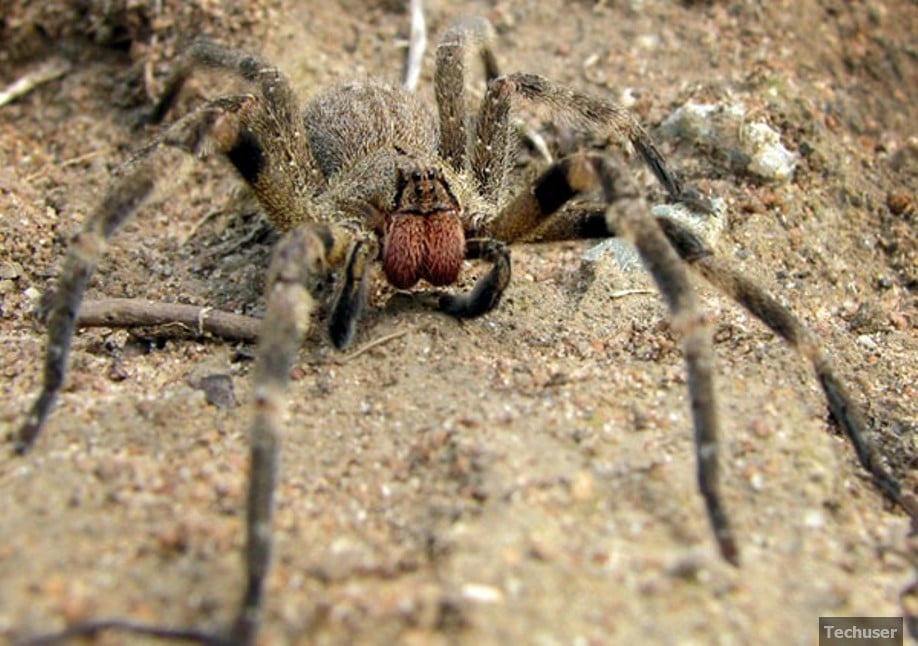 It may not be the biggest spider in the world – its leg span is only six inches(!) – but the Brazilian wandering spider is a particularly nasty little arachnid. It’s the most venomous spider in the world and, rather than only biting in self-defence, it’s abnormally aggressive. They usually live in the jungle, but are quite happy to wander into people’s homes and hide in their shoes. These Brazilian spiders also like hiding in bananas and sometimes accidently get exported to other countries (so, if this spider sounds terrifying to you, remember that you’re not even safe in your local Sainsbury’s). 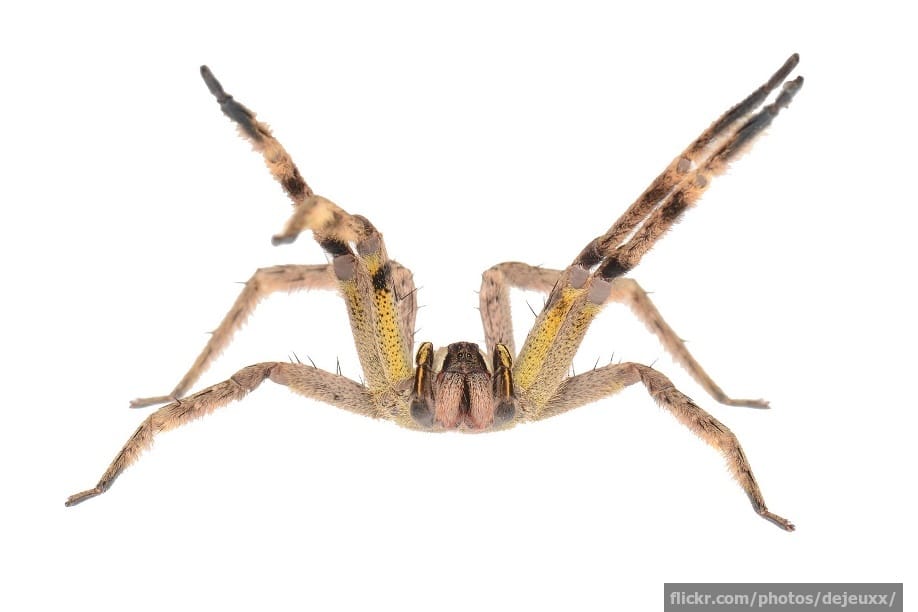 If you’re bitten by the Brazilian wandering spider, the venom can cause pain, inflammation and, hilariously, priapism – a long lasting, uncomfortable erection. In many cases, the priapism can last for several hours and, if untreated, the blood can clot in the penis causing impotence or even gangrene (ha-ha-ha). If threatened, the spider has a recognisable defensive stance – it lifts its front legs into the air and sways from side to side. So, if you ever see a scary-looking spider doing this, I’d suggest getting yourself (and your willy) far away from it. 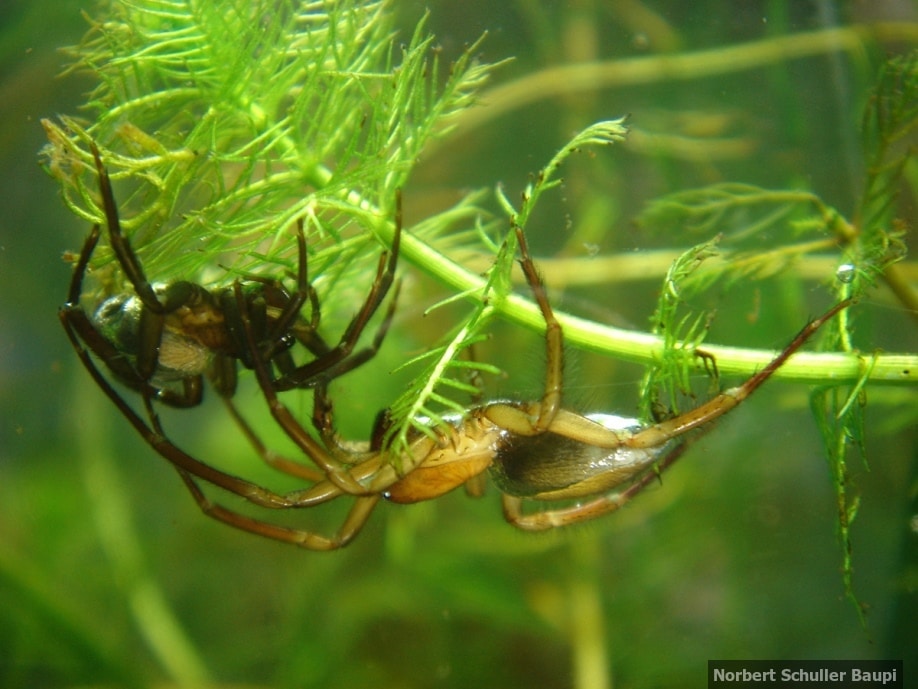 Just when you thought it was safe to go back in the water… no, don’t – there are spiders there too.

The diving bell spider isn’t dangerous and it’s only a couple of centimetres long, but it’s so clever that, if it put its mind to it, it could still probably work out how to bite you. The spider is the only one to live underwater – it spins a web and then fills it with air, creating a bubble that allows it to stay beneath the surface. Diving bell spiders spend their whole lives in this bubble, just popping out briefly for a bite to eat or to grab some new air, which they bring back home trapped in the hairs on their bodies. 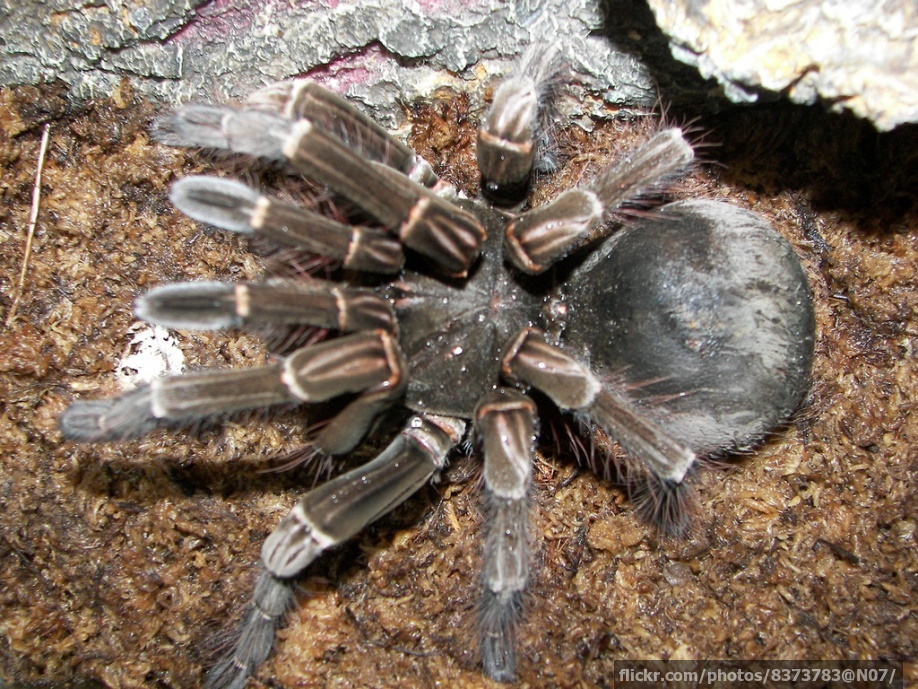 The giant huntsman may have the longest legs, but the goliath birdeater is probably the most massive spider species in the world – at 11 inches it’s only slightly smaller than the huntsman, but has a much bigger body. If it helps, think of that dinner plate again, then imagine a spider on that dinner plate, then imagine that the spider’s legs only just fit on the dinner plate but it’s its body that’s taking up most of the space. It’s a disgusting thought, sorry. 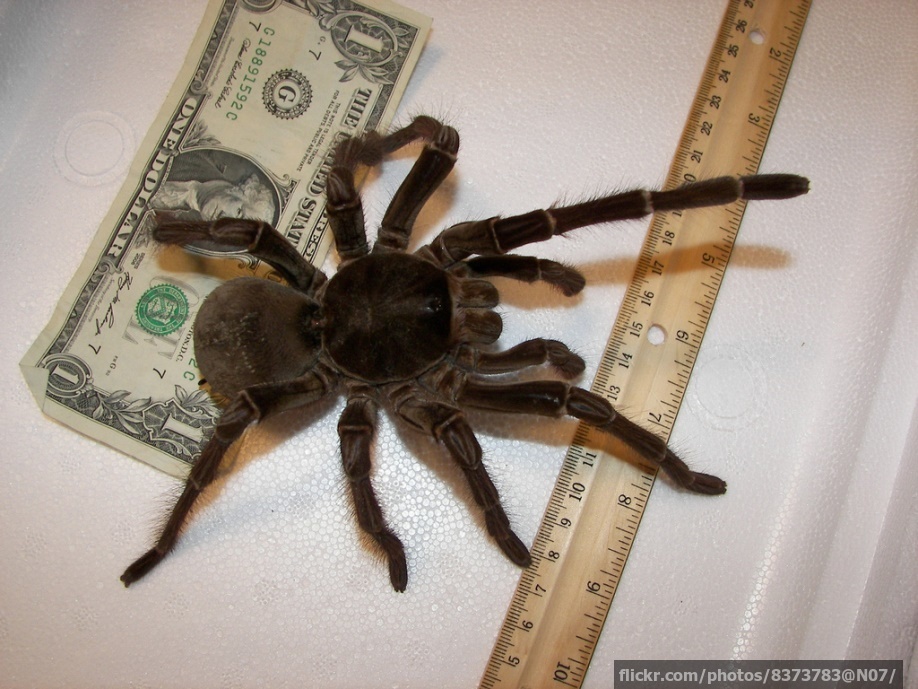 Although the “goliath” half of their name seems appropriate, it’s a bit unfair to call these enormous spiders “birdeaters”. They’re mostly insect-eaters, but they’ve also been observed being rodent-eaters, frog-eaters and snake-eaters. 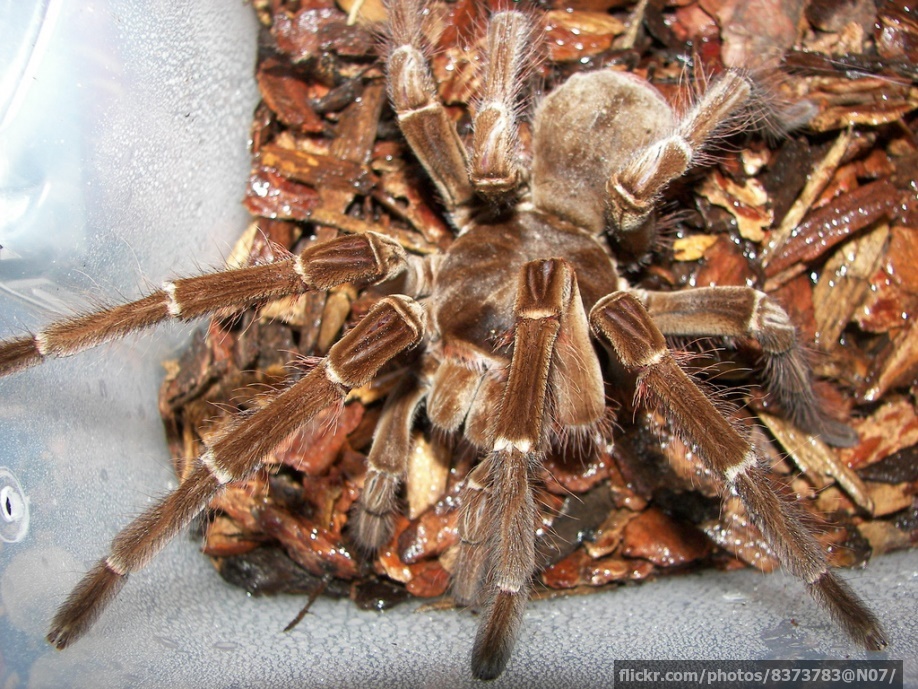 Goliath birdeaters have hairs that can irritate human skin, but their venom is relatively harmless – roughly equivalent to a wasp sting. When they feel threatened, they’ll rub their legs together to make a noise (a bit like a grasshopper) – this makes them seem quite nice but, unfortunately for them, the spider’s size and appearance is physically repulsive on quite a fundamental level. 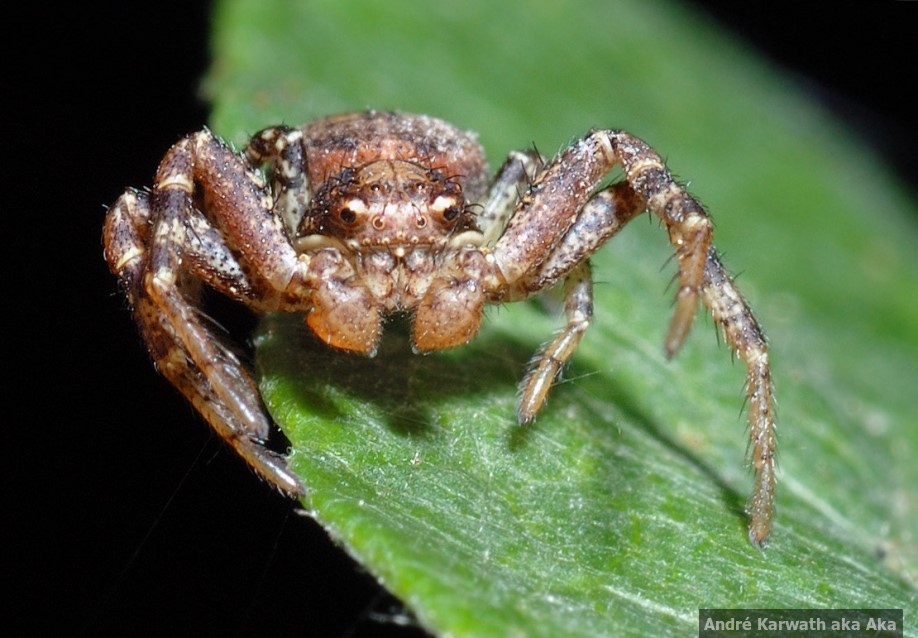 Crab spiders don’t build webs; they’re ambush hunters who wait around for an insect to come near, then grab it and bite it and eat it. 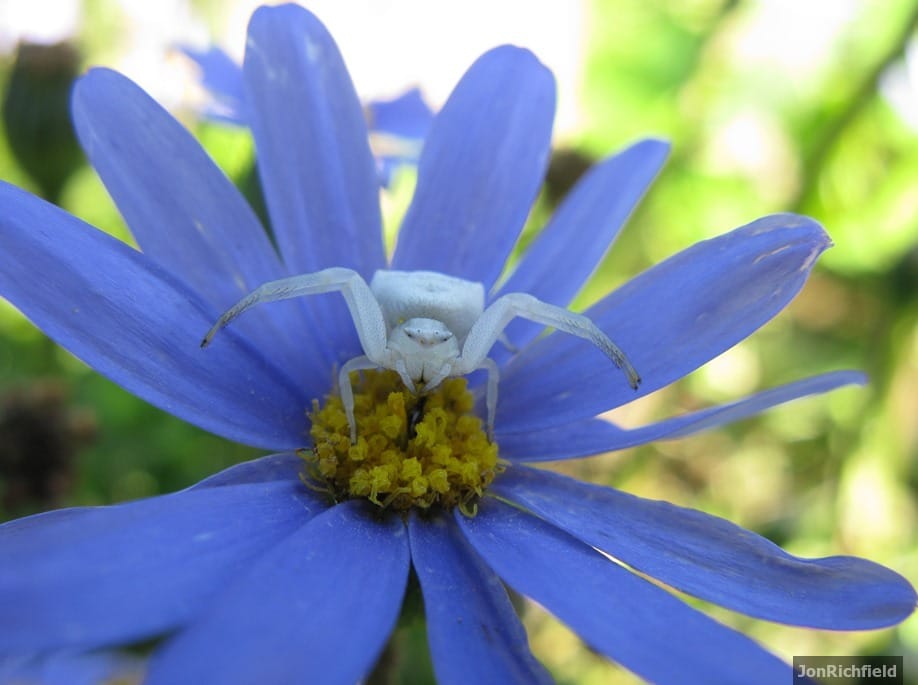 You might wonder why an insect would go anywhere near a dangerous spider, but it’s really not their fault – they get tricked into it by the crab spider’s excellent mimicry. Most species hide on flowers, pretending to be part of the plant, and try to catch any insects that arrive for a feed. As well as staying still and looking like they belong to the plant, some crab spiders can even change their colour to match that of the flower they’re sitting on. 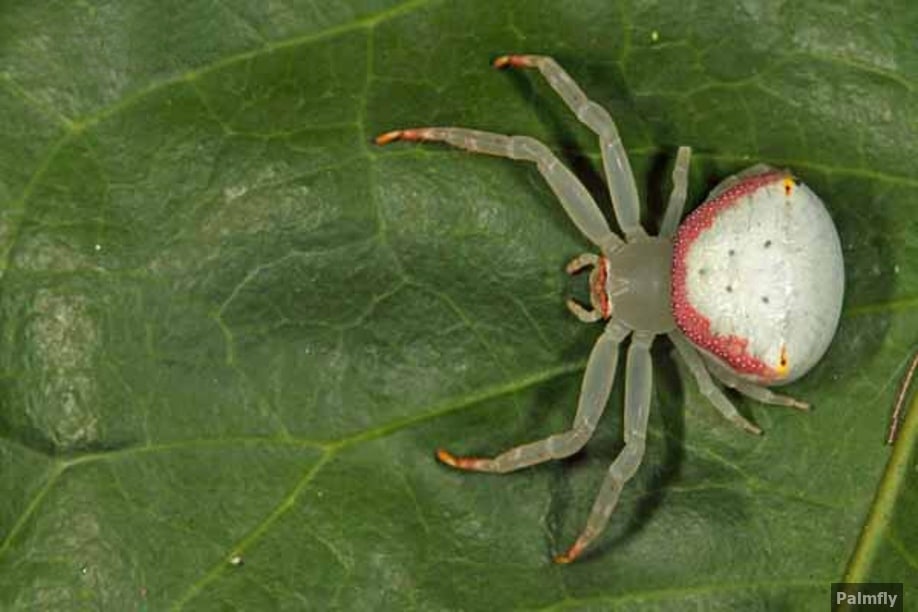 Pretending to be part of a flower is one thing, but some crab spiders have taken on the unappealing task of pretending to be bird droppings. These ugly little crawlers sit on a leaf like a blob of fresh poop, waiting patiently for any insect who might be attracted to that sort of thing. In some cases the crab spider will take things a step further – leaving a trail of silk on the leaf to look like a wet dribble and emitting a foul smelling odour to complete the excrement effect.

The eastern tarantula is the biggest spider in Australia – with a leg-span of over nine inches, it’s only slightly smaller than some of the giants we’ve already looked at. This eight-legged freak is sometimes called the bird-eating spider and (unlike with the goliath birdeater) this time the spider lives up to his name. As well as birds, the spider is known to eat large insects, small mammals and even cane toads (which are pretty big themselves).

A bite from an eastern tarantula isn’t fatal to humans, but can cause up to six hours of vomiting (after which you’ll probably wish you were dead). If that wasn’t enough to put you off going near one, you probably need to know that their massive fangs can grow up to 3.5 inches in length. Fortunately, another name for this tarantula is the barking spider because of the noise it makes if approached – it’s very decent of a mammoth, big-toothed spider to offer a warning, but I’d imagine that unexpectedly hearing the noise in your garden must be a bit unnerving

If you decide to visit any of these eight-legged chaps in their home countries, take your travel insurance out first.