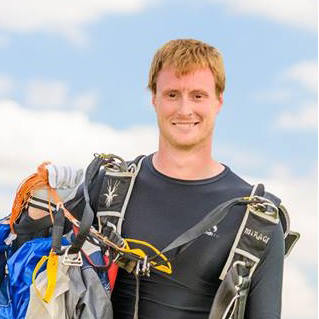 Andy Pointer is a Chief Instructor at Skydive Algarve, specialising in teaching and looking after the safety of thousands of skydiving students every year.Andy had an interest in heights from a very early age, throwing himself out of trees at five years old. Years later, a charity skydive would spark a love for greater heights and he found himself applying for a skydiving licence. Andy is now Chief Instructor at Skydive Algarve and responsible for thousands of jumps every year. He talks about how leadership is important in preparing students to do something as unnatural as jumping out of a plane and how military style training keeps them safe.

Feeling the weightlessness, the speed, the freedom from worry and stress; feeling it all for myself was something else. 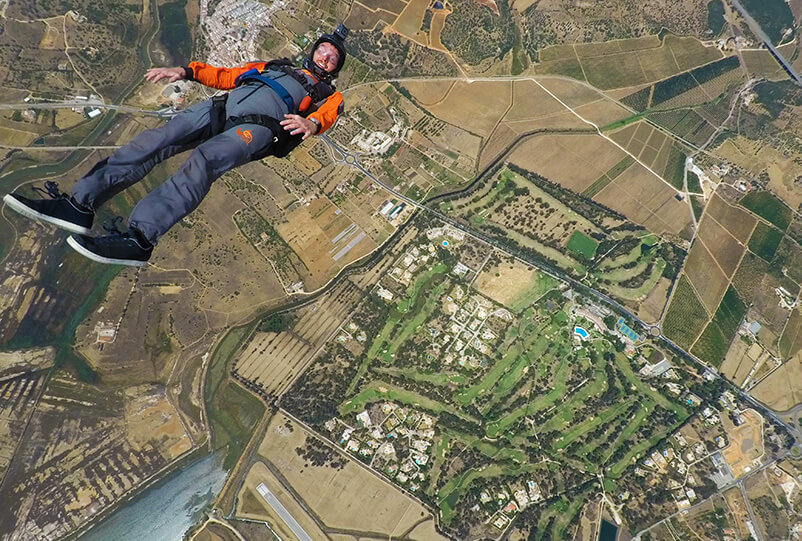 When I was 18 and living in England again, my friend Alex asked me if I’d accompany him on a fundraising tandem skydive. I didn’t take any persuading. My mum was initially reluctant, not out of fear for my safety- she trusted that modern skydiving operations must do well to mitigate risk, or they wouldn’t be operating. She was reluctant because she knew, without any doubt, that this would take over my life as soon as I had just a single taste.So yeah, I guess she was right. It blew my mind all over again. Seeing it on a TV was one thing. Feeling the weightlessness, the speed, the freedom from worry and stress; feeling it all for myself was something else. It was one hell of an emotional cocktail that first time and I was hooked. I completed my Accelerated Freefall (AFF) course at the North London Skydiving Center in the weeks that followed and then went off to university with a skydiving licence for the greatest hobby in the world.While I was at university studying psychology, I spent half my time creating and then running a new students’ union Skydiving Club. The club dropped me in at the deep end in a sense. It was my first taste of leadership, and it to be experiencing that against the backdrop of the sport that I loved did two things for me. Firstly, it made it remarkably enjoyable. To be leading new friends along their journey into skydiving gave me a whole new ‘fix.’ Secondly, it never seemed like a challenge. Leading people down this road and showing them what Skydiving had to offer always seemed completely natural. Like there was nothing else that I should or could have been doing at that point in time. Before the club, I was always firmly of the opinion that this was the greatest hobby I could possibly have, but that was always it was ever going to be. I would graduate university, and keep one foot firmly on the ground, working a ‘real world’ job, and going jumping at the weekend. 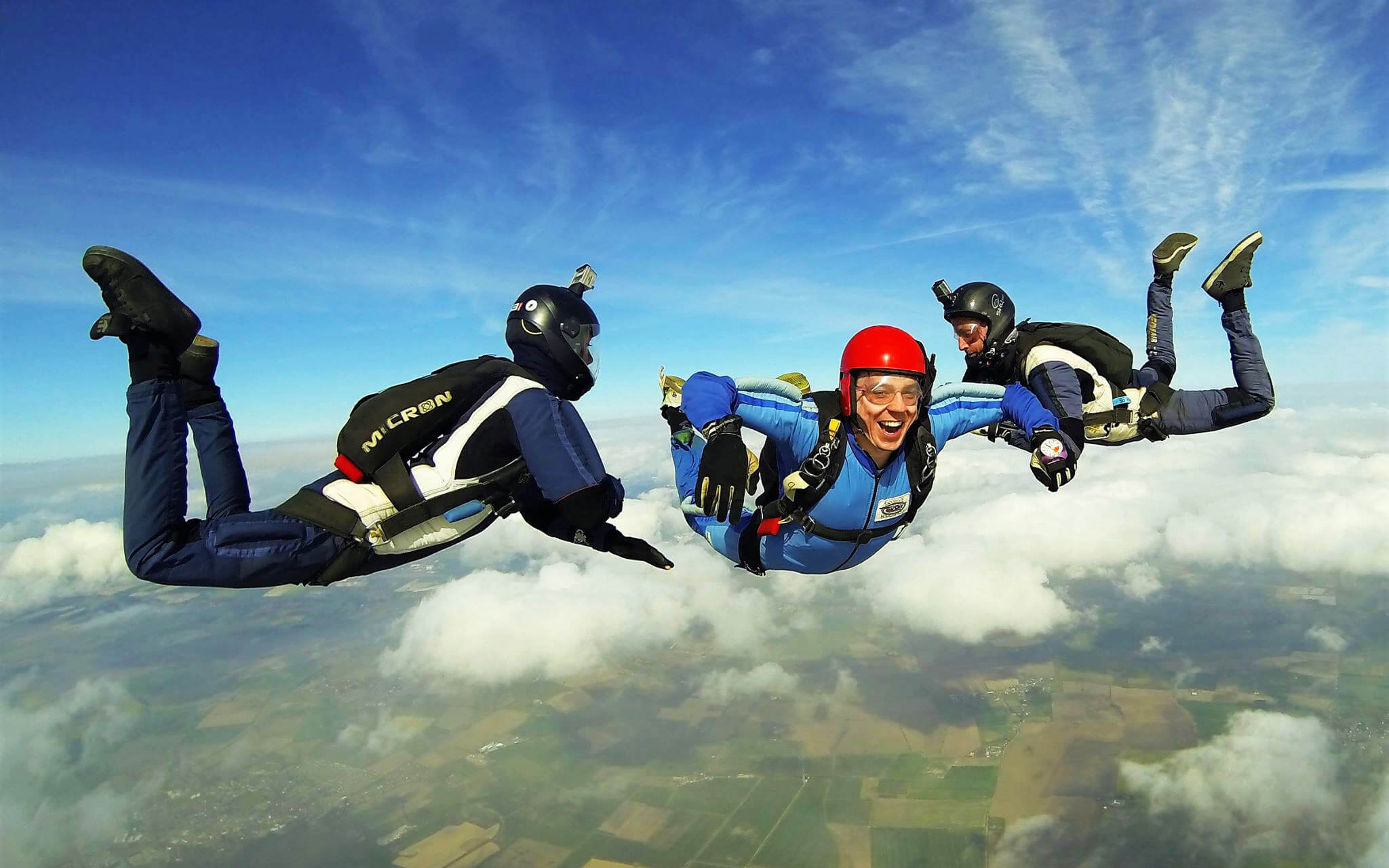 The more people I introduced to the sport, the more I fell in love with being on the DZ (Drop Zone), even on the ground, and helping other people to enjoy skydiving. At some point while running the club, the plan changed. I needed to throw myself headfirst into the sport, and immerse myself in it, full-time.On one club outing to Skydive Hibaldstow in North Lincolnshire we had the resounding poor luck that it was snowing all weekend, so instead of jumping, we did what any self-respecting group of university students would do and drank way too much Sambuca. While I was visiting this DZ for the first time, I stumbled across a familiar face. Bryn, the instructor that took me on jump number one and later helped me through my AFF course to my licence at the North London Skydiving Center. I had no idea that he now worked at this DZ but was thrilled to recognize him instantly. What really surprised me though, was that he recognized me as a mate as well. 3 years and hundreds of other students later. This is just one of many times that Bryn has struck me as an absolutely inspirational instructor. We got to talking and he told me about a new type of apprenticeship scheme that was about to start running. To bring in new skydivers and train them intensively over the course of a summer season to work on a dropzone and eventually progress to become an instructor. Maybe one day, with a bit of work, I could build my enthusiasm for bringing people into the sport to the degree that I could be an instructor just like Bryn.I wasn’t keen on the idea of abandoning my psychology degree that I had already spent so much energy, time and money on. So I resolved to get that finished first. Little did I realize at the time, that a lot of the social, cognitive and developmental psychology that I was learning about would be an invaluable resource later down the line, when I began to train students, and later instructors. 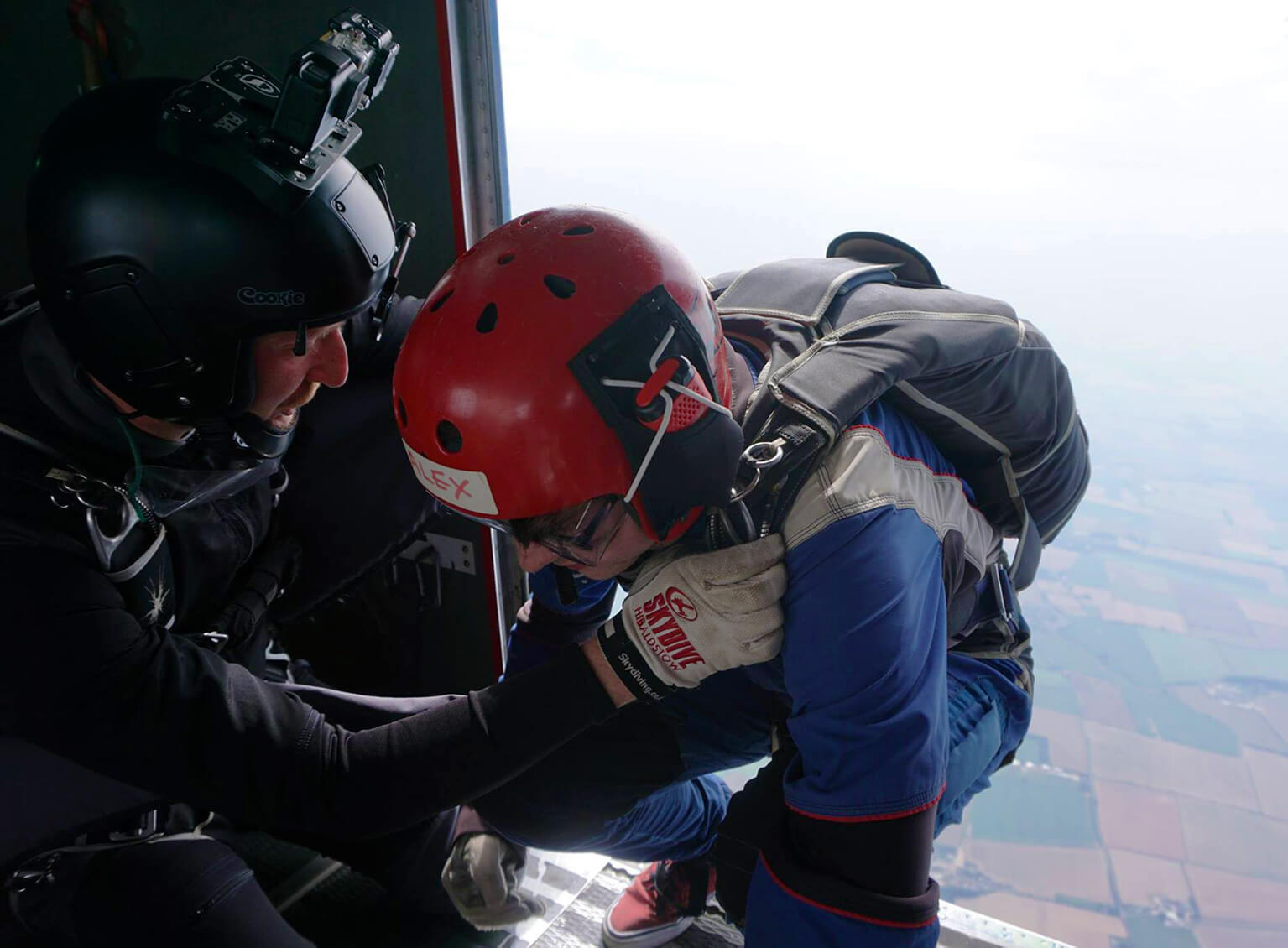 The instructor needs to be acutely aware of the mental state of their student at all times.

After completing my degree, I moved to North Lincolnshire to work with Bryn and later, some new friends and industry role-models: Rob and Noel, to learn what it meant to be a skydiving instructor.The national governing body for skydiving in the UK: ‘British Skydiving’ traditionally train their instructors to teach in a very military fashion. This is in part due to the military heritage of the sport. Brave men were jumping from planes because they needed to long before people started doing it for fun. However, these military teaching methods are still used because they are also very effective. Instructors are taught to repetitively drill new students in an effort to almost turn them into robots. That same freefall environment that blew me away on my first tandem, can be a dangerous place for a solo student, and nothing less than peak performance is acceptable when the ground is approaching at 130 miles per hour. If we can drill the skills required to be performed automatically by the student, the chances of a mistake or a ‘deer-in-the-headlights-type’ fear response can be dramatically reduced.This of course needs to be combined with a high level of student consideration. The instructor needs to be acutely aware of the mental state of their student at all times. This is something that British Skydiving train all instructors to be aware of, but I feel like I have had a kind of unfair advantage with, having studied psychology. Understanding students’ headspace is of paramount importance to keeping them and others around them safe. Throughout the last 10 years, I have not always made the perfect decisions, but am always striving to learn and do better with every day that passes, every student I train, and every skydiver I supervise at my home dropzone: Skydive Algarve.

Student skydivers are truly throwing themselves into the unknown. The only way that this can be done safely is with strong, confident leadership from the instructors. And this sport has taught me (and continues to teach me) a lot about what that entails. A leadership position in this sport requires swift and sound decision making. It requires knowing how and when to protect your student, and how and when to expose them and push them harder to achieve. You are guiding the student into a world that they cannot possibly have comprehended before that very first jump, and every step can be a surprise and a steep learning curve at that early stage. It is the responsibility of the leaders, like myself, to keep that journey exciting, but the path ahead clear and safe.Skydiving offers me and many others so many different things. For some, it’s a way to forget about the bills, the struggling relationships, the monotony. When you exit the aircraft, there is only that skydive. Everything else fades away into the background until it has disappeared.For others, the jump is about peak performance. There are huge competitive elements that take place all over the world, and athletes train all year round to bring home medals, or even just push their personal skill level higher and higher and higher. 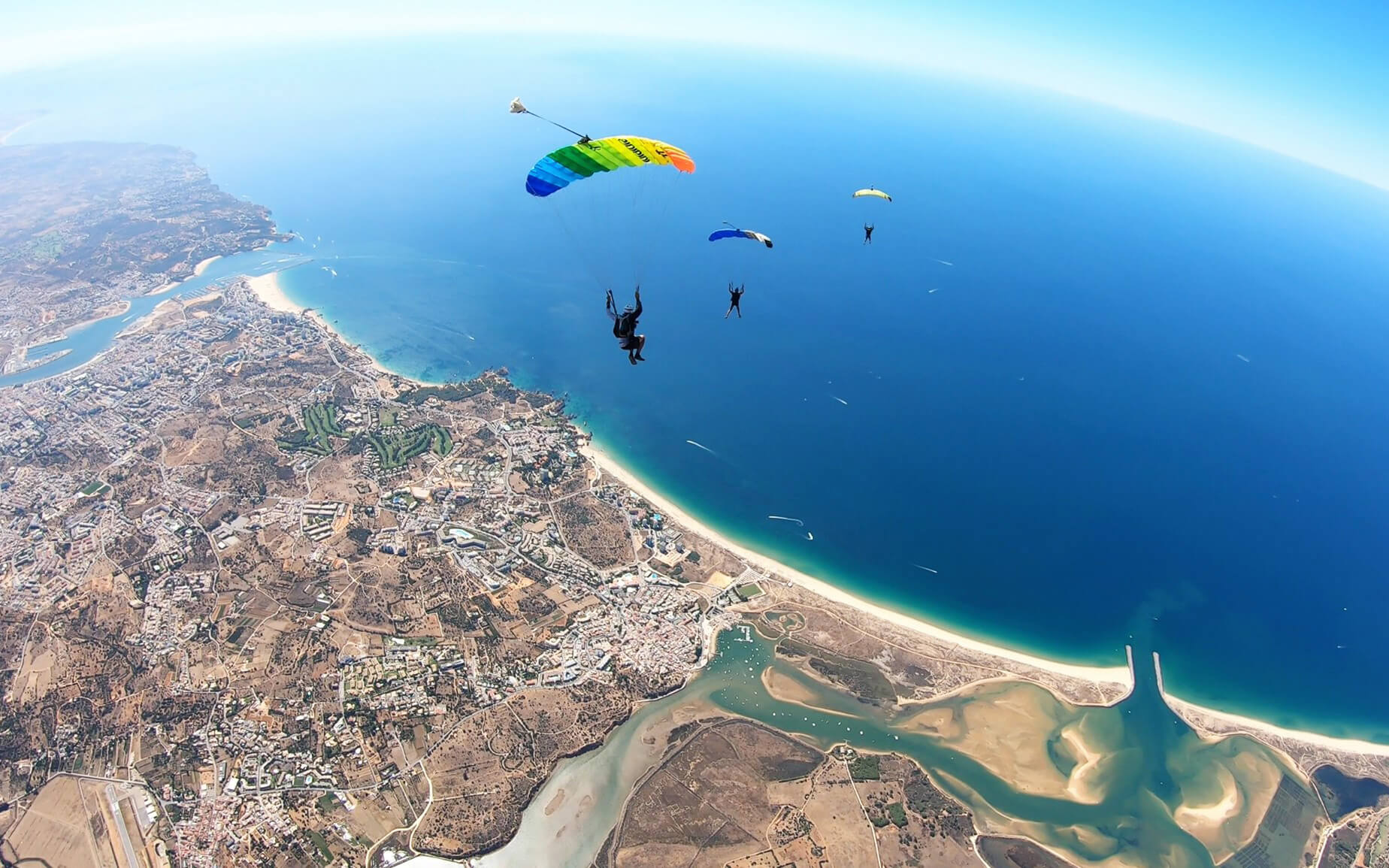 For others, it’s simply the most fun they could possibly have with their mates at the weekend. A day of sharing skydives together, and then an evening of discussing what to do on the next few jumps while drinking a beer together.For many professionals, it’s an industry that allows them to do a job that they love, and can also allow them to travel and see some of the most beautiful places in the world, from a truly unique viewpoint.For all of us, it’s a challenge; at times an unforgiving one. Equipment can fail. In a few thousand jumps, I have needed to resort to my reserve parachute 4 times. Human error is always the most dangerous variable. Injuries can occur from making incorrect canopy-piloting maneuvers at too low an altitude; or from making inappropriate maneuvers during freefall as part of a group. Collisions have the potential to be disastrous, as the closing speeds can be incredibly high. Weather conditions can have a huge impact on the ability to skydive safely as well. 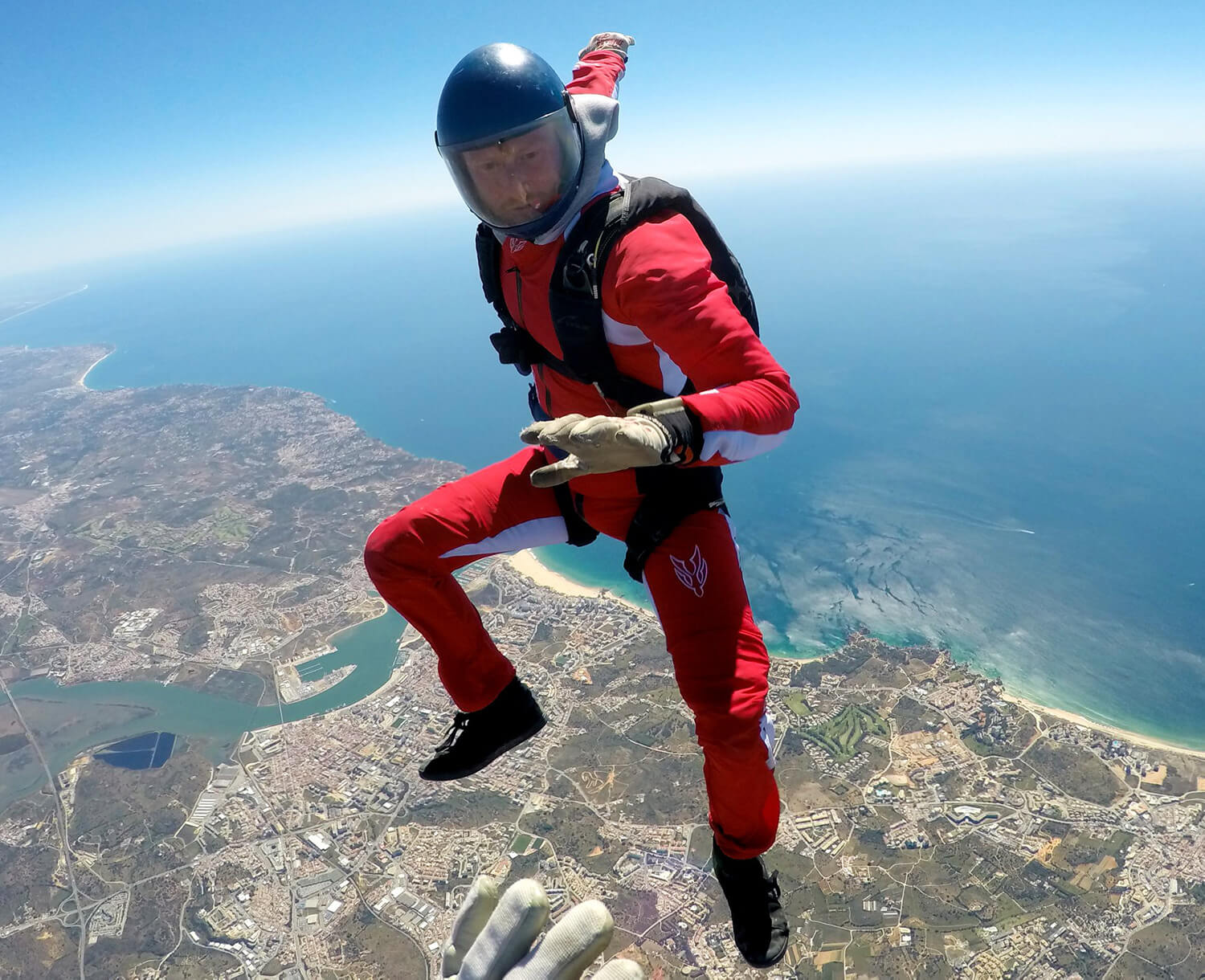 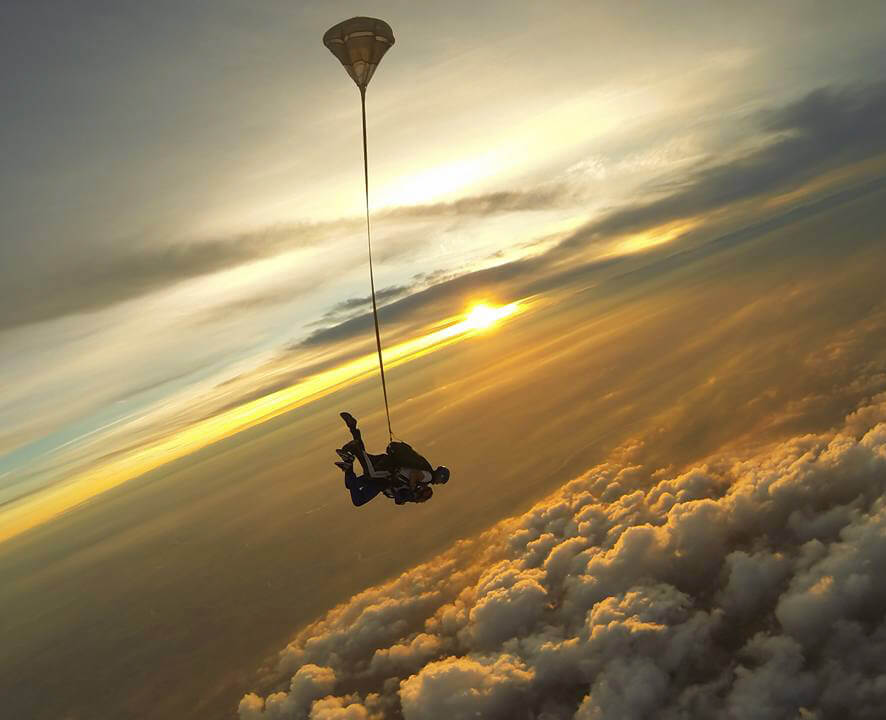 For all of these variables, there are controls to keep risk minimized. Applying these controls relies on having capable leaders throughout the sport. Integrated with it at every level. There are parachute riggers making sure that equipment functions as it should. There are coaches and instructors making sure that everyone is trained to the highest standard. There are Chief Instructors watching and supervising it all.It is the pleasure and responsibility of my career to be the Chief Instructor at Skydive Algarve. There are locations around the world, like ours, that cater to as many different types of skydivers as possible: from the first-time tandem student to the reigning world champions training for the next competition. My path through the sport has led me to a passion for maintaining and improving safety while giving everyone the opportunity to jump as much as they can and push the bounds of their own skydiving ability and satisfy their desire for progress and improvement.Ours is a sport with endless scope for progress and challenge. I find myself now in a role where it is my responsibility to ensure that the challenge is always manageable and appropriate; for the first time student, for the instructor, for the world champions. It’s a role that would be impossible without the peers I surround myself with. The coaches, instructors, parachute packers and riggers. Not just at home, but at skydiving operations all around the globe. They are the team that I and every other skydiver out there rely on to lead the way. To keep our beautiful sport moving forwards, pushing the limits of human flight and enjoying every safe, secure step along the way. 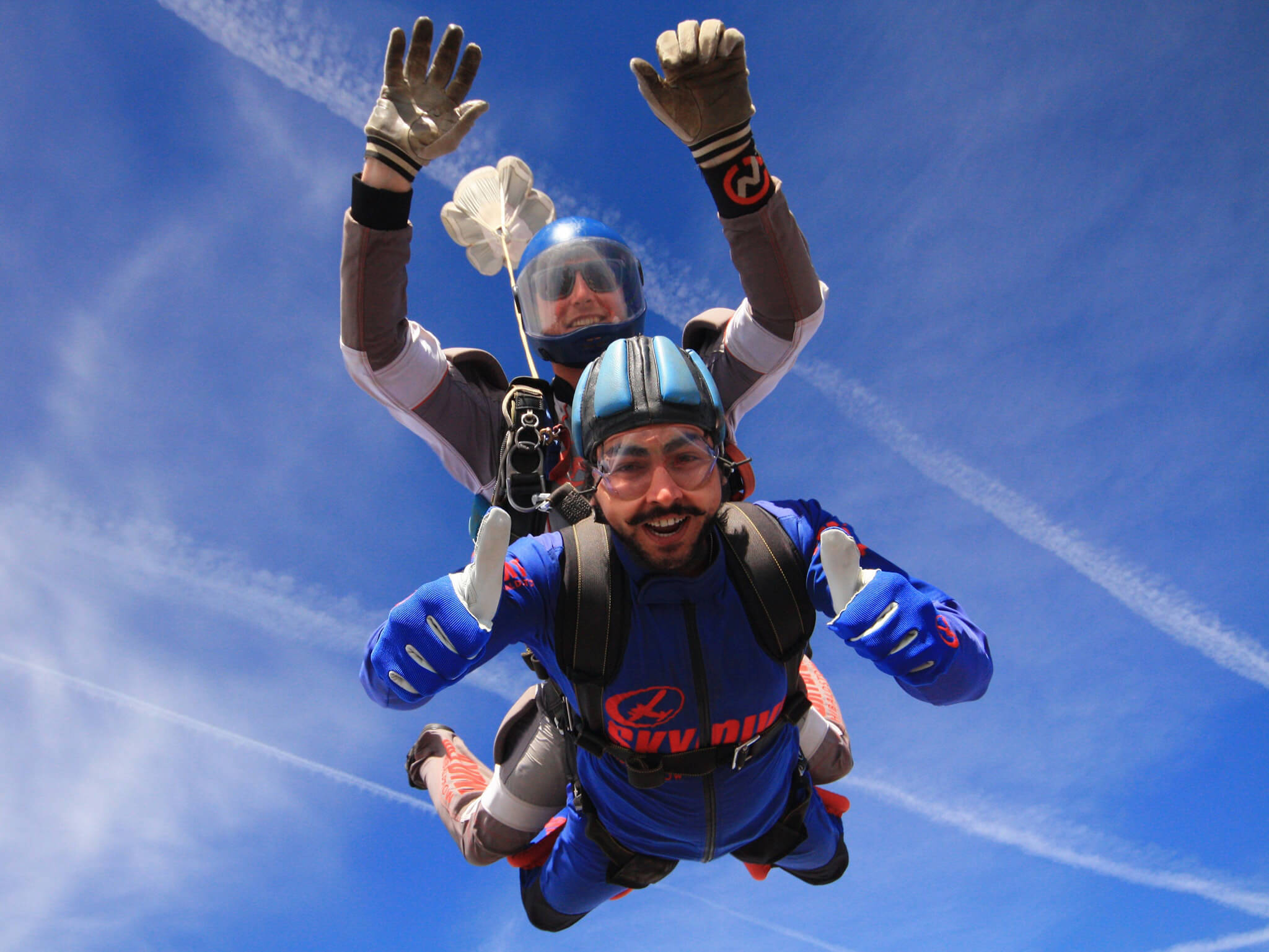 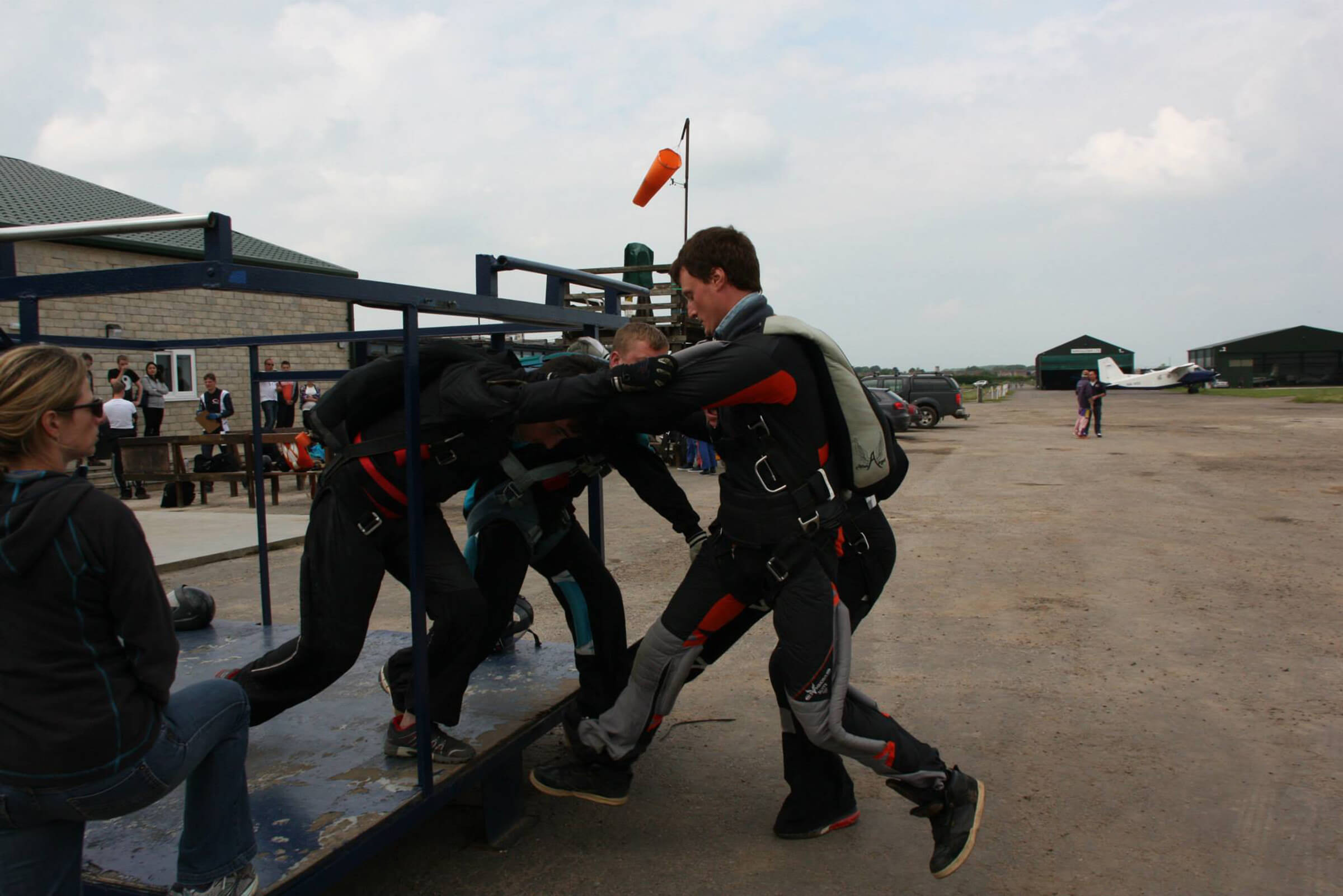 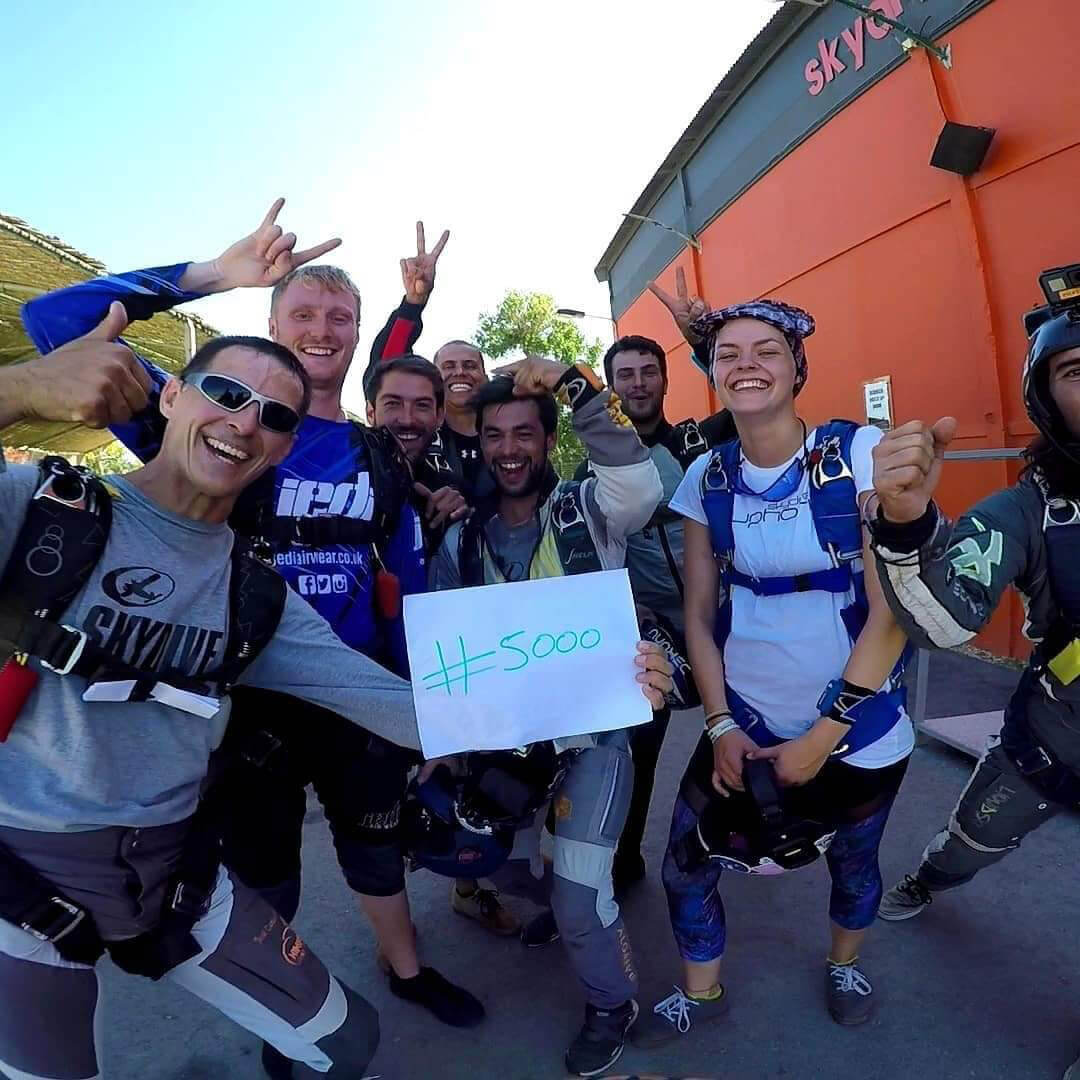 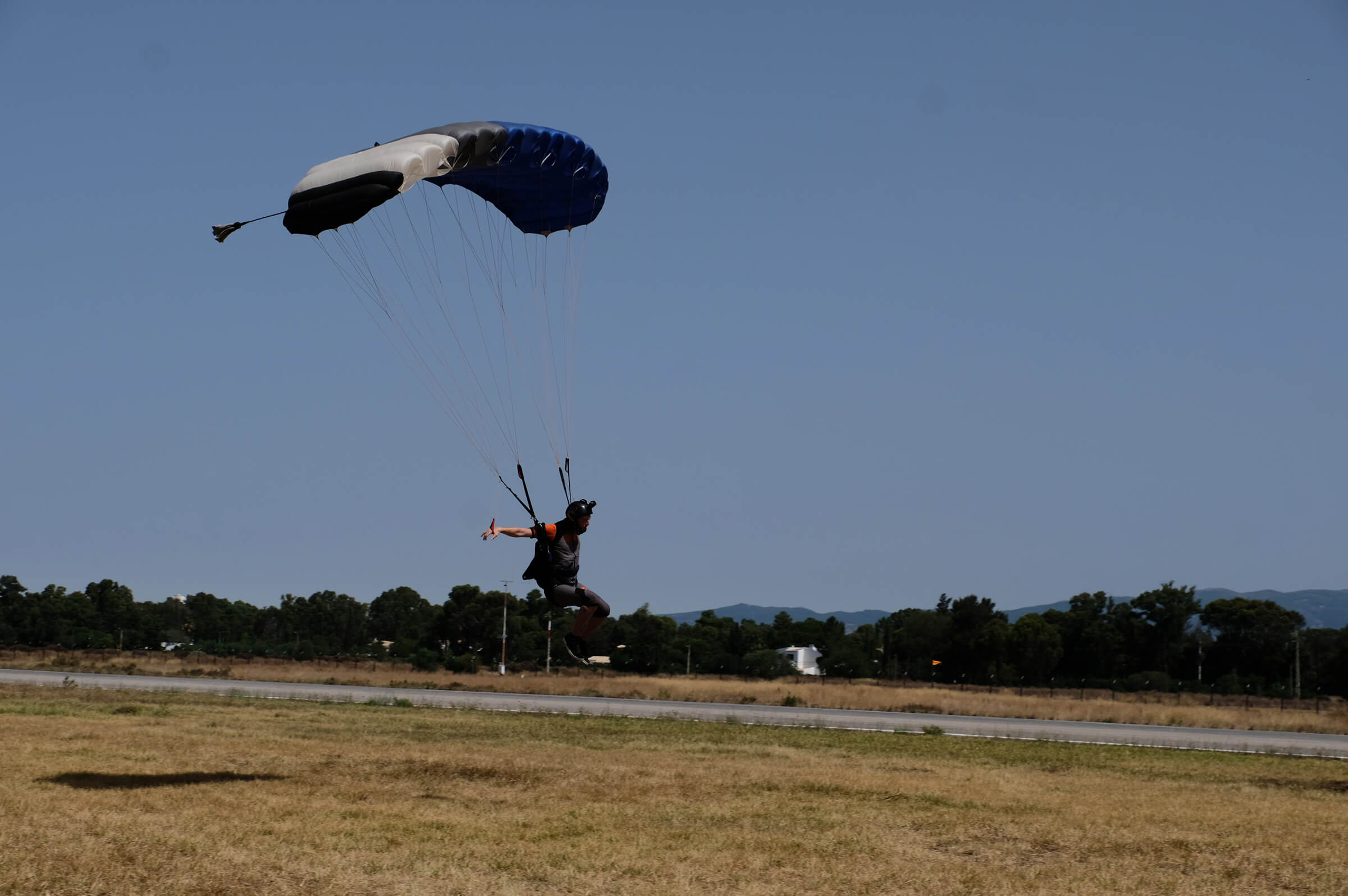