There are examples of unusual public art all around the world, but rarely are these examples as consistently and suspiciously strange as those at Denver International Airport. With apocalyptic visions, biblical references and hints towards the New World Order, it’s little surprise that the artworks here are frequently used as evidence of secret goings-on at the site. 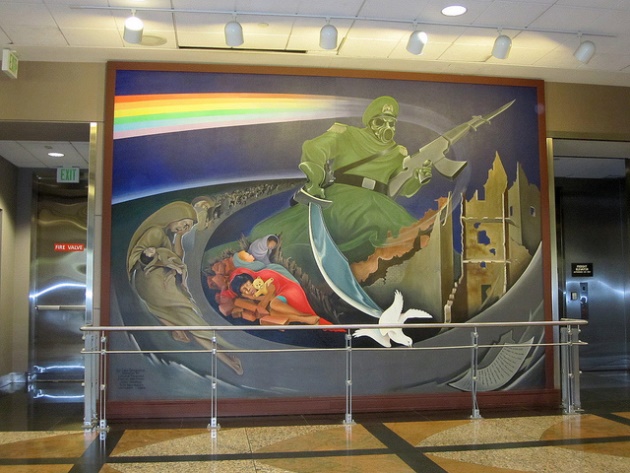 Allegations of underground bunkers and runways in swastika formation have lead to theories about Denver International covering everything from the Illuminati to aliens and Nazis. However, it’s the airport’s choice of decoration that has raised most concern. Perhaps in the future we will be told the truth, but for now one central question remains: Denver International Airport – high-level conspiracy or low-level art commissioning mistake? You decide… 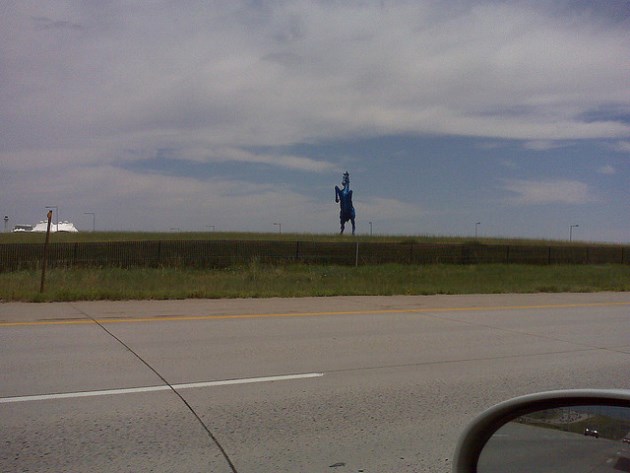 Many international airports have a model or sculpture near the main terminal entrance. Heathrow, for example, has a model of a large aeroplane. Likewise, Denver International has a 32-foot blue horse with fiery red eyes. Both are equally sensible statues for an airport to display. 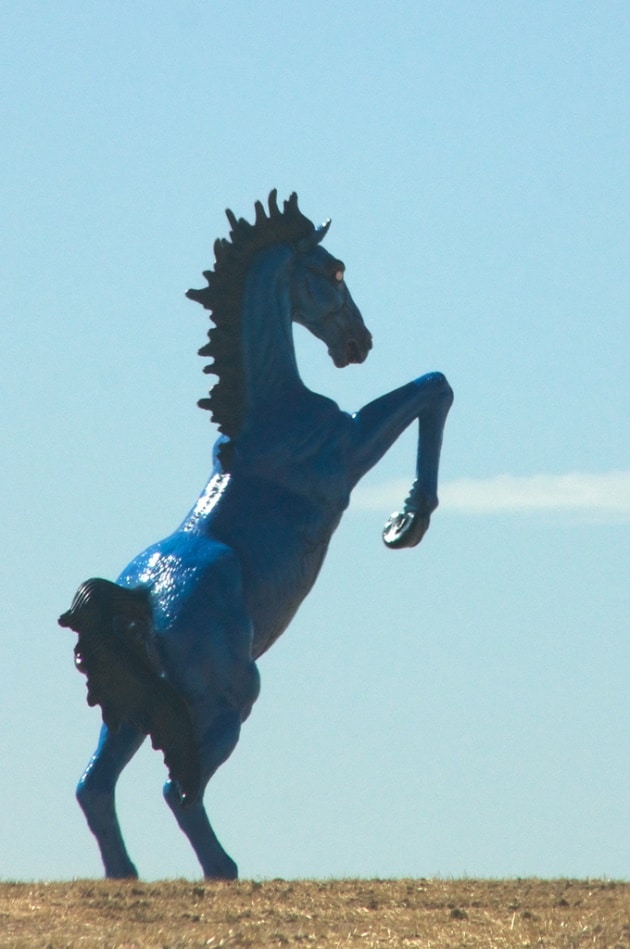 The horse is supposed to be called Mustang, but the sculpture’s bulging veins and demonic eyes have lead to terrified travellers naming him Blucifer. It’s unclear exactly what role a big blue horse plays in the creation of the New World Order, but they’ve put him in a prominent position so it must be something important. Some investigators have suggested that the horse represents the pale horse ridden by Death in the Book of Revelation – an idea that seems silly at first but, in the context of the rest of the airport, turns out to be one of the more plausible Denver theories. 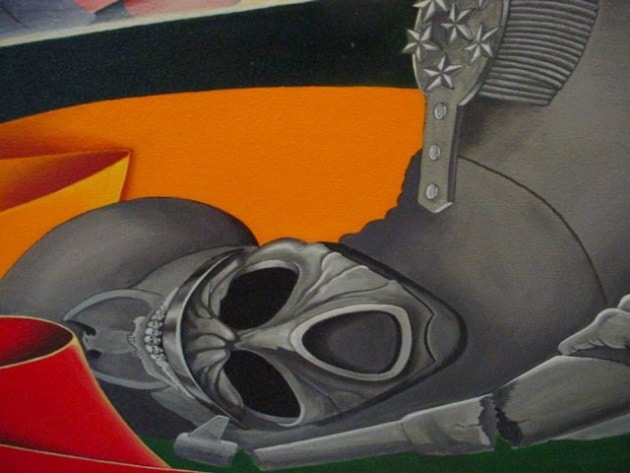 Art can teach us about death. A sensitively produced painting can educate us about the horrors of war and remind us to avoid such painful conflicts in the future. Unpleasant as they may be, there is a place for images of destruction and violence – and that place is on the wall at Denver International Airport. 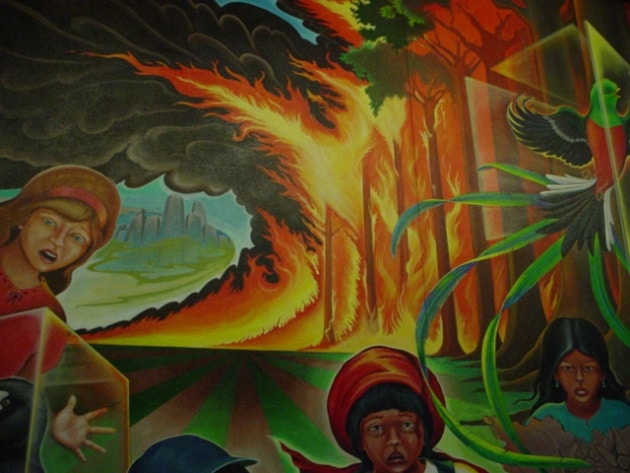 It’s nice to have some colourful paintings to look at while waiting for a flight, but it’s a bit of a mystery why these pictures of dead children and burning buildings were chosen to entertain holidaymakers. Of course, some believe that it isn’t a mystery at all – they believe that these pictures were painted deliberately to show the sequence of events the Illuminati have planned for us in the near future. This theory assumes that the evil conspirators are simply hiding in plain sight but, even if correct, it seems a bit brazen of them to paint a comic strip detailing the ways in which they’re going to enslave the human race.

Whatever their political objective, there can be no doubt that the murals contain some disturbing images. From burning forests to gas-masked soldiers, the pictures clearly show a world in some kind of turmoil – whether that be in our past, present or future. The final painting shows people and animals gathered together around a magic plant so, whatever horrors might await us, it looks like everything must turn out OK. 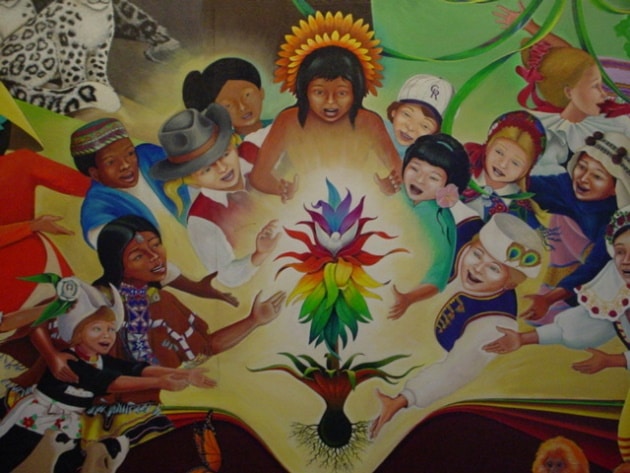 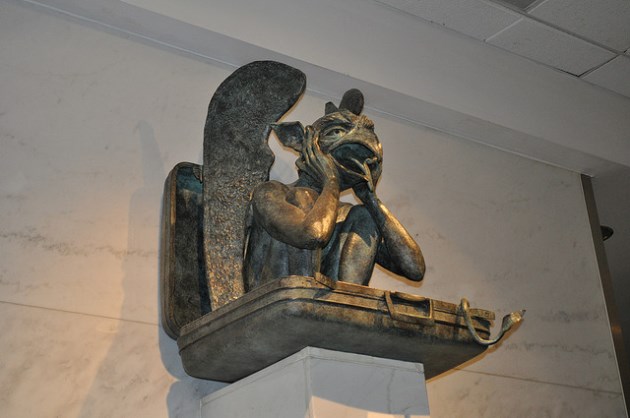 As all regular fliers know, there is a growing (and increasingly strange) list of items that are banned from your luggage: first scissors, then liquids, now toner cartridges must all be surrendered before boarding a flight. Surely, if these potential weapons are outlawed, it must also be against the rules to transport little flying monsters in your suitcase?
These winged terrors, as found in the baggage claim area of Denver International, are usually described as gargoyles. Technically, they should be called grotesques – they’d only be gargoyles if they had a water spout and were used to direct rainwater off the building. Sorry to be pedantic, but it’s important to get these things right. Still, gargoyle or not, it doesn’t change the fact that they’re pretty frightening and a peculiar choice for a modern airport. 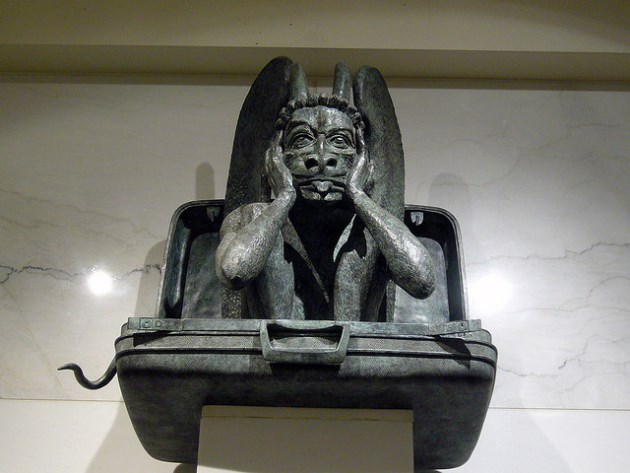 So what do these strange creatures, emerging from suitcases, represent? Most people assume they’re depicting some kind of secret nastiness being transported through the airport, while others suggest that the creatures’ otherworldly appearance is a clue to who might really be running things at the site (it’s the aliens, obviously.) The official explanation for the presence of the gargoyles is that they’re there to protect the luggage and ensure it arrives safely. If true, rather than being reassuring, this seems to show a serious lack of confidence in the airport’s baggage handlers (who I’m sure are all trying their best). 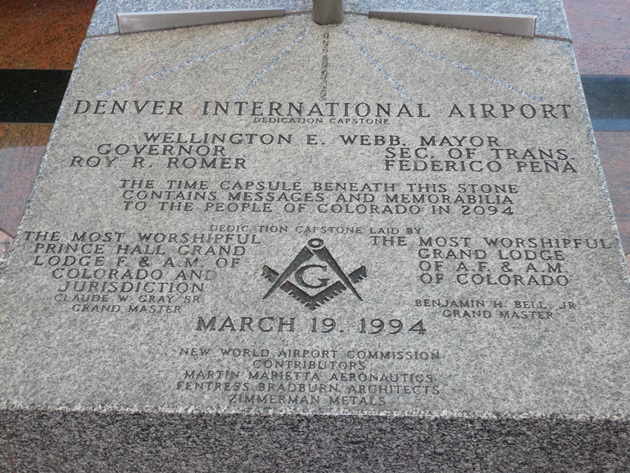 During the construction of Denver International Airport, a series of buildings were put up, then judged to be in the wrong place and buried underground. According to who you believe, this was either a costly error or the creation of a subterranean military complex. As soon as it was finished the airport was said to be the future headquarters of the New World Order, an accusation that was further fuelled by the placing of a capstone featuring Masonic symbols and, unhelpfully, a tribute to the New World Airport Commission.
Beneath the stone is a time capsule and, naturally, speculation is rife about exactly what sinister objects might have been stored here. The official Denver International website gives a sample of what’s inside, and I’m sure the people of Colorado in 2094 will be tremendously excited when they find a baseball and some 100-year-old casino tokens. The airport website also addresses any conspiracy theories about the New World Order with the words:

Rest assured the story is definitely a myth.

So that’s that all cleared up then.

If you’re going away soon, don’t forget your travel insurance. Even if you’re travelling through Denver, there’s no guarantee that the gargoyles will protect your luggage, and you’ll still need cover for unexpected cancellations, medical expenses, and more!